Every Good Fairy Tale Needs a Villain - Reflections on Mark 3:20-35 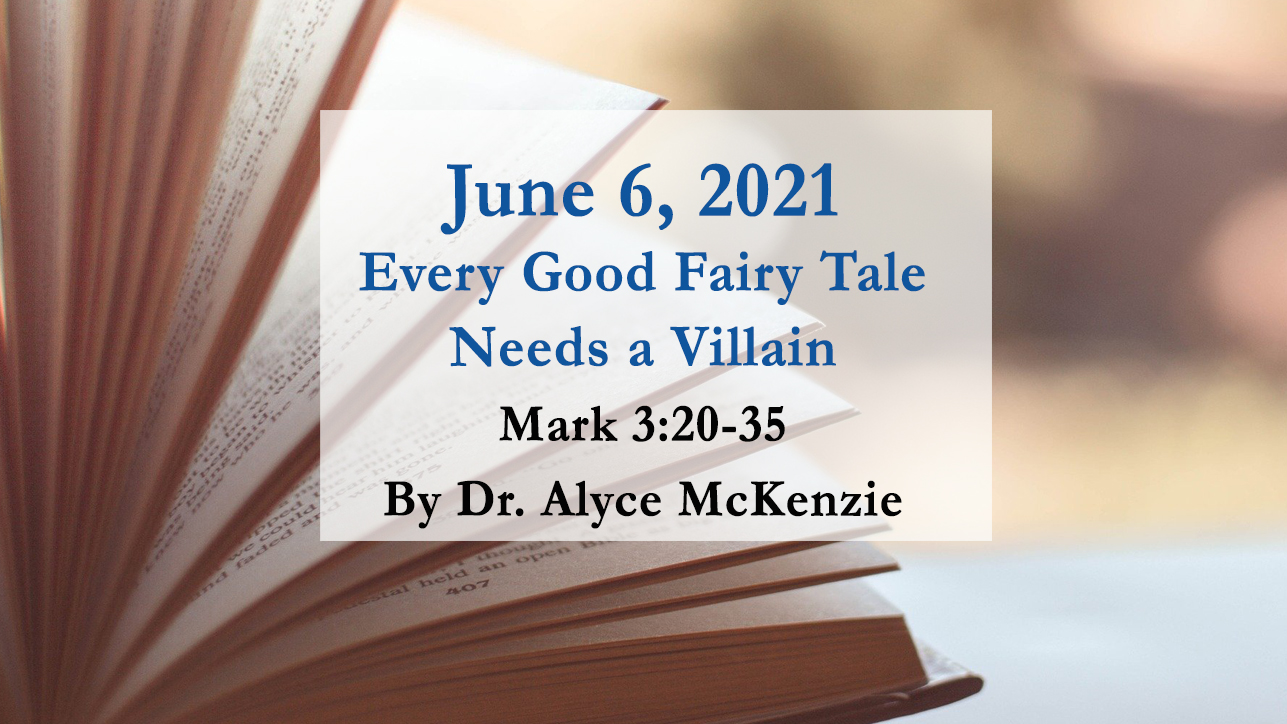 I’ve been watching the PBS series on Sherlock Holmes. Instead of being set in London in the 1880s, it takes place in present-day London. Instead of sending telegrams, Sherlock sends texts. Instead of serving with the Fifth Northumberland Fusiliers in India, Dr. Watson is just returning from the War in Afghanistan. Dr. Watson doesn’t publish books about their exploits; he blogs about them. But one thing remains the same across the decades: the Villain. He is Professor James Moriarity, described as “the most diabolical criminal mind the world has ever seen.” While most people never see the link between the violent criminal activity in their world and this master villain, Sherlock does. He and Moriarity are locked in a contest of wills, each committed to the annihilation of the other. As Moriarity himself says, “Every good fairy tale needs a villain.”

In the ministry of Jesus, that villain is referred to Satan, or, in our passage this week from Mark 3, Beelzebul. Beelzebul is a Semitic deity worshipped by the Philistines. The name literally means “Lord of the Flies.” In later Christian sources it becomes another name for Satan.

Satan tempts Jesus in Mark 1:12 and parallels (Matthew 4:1-11; Luke 4:1-11). Called Satan in Hebrew, the Devil (diabolos) in Greek, this figure stalks the pages of the Bible, growing in hostility and power over against God. The Satan (adversary) makes cameo appearances as an agent of God in the Old Testament. His primary role was to uncover the weaknesses of humans who were highly regarded by God, allegedly to preserve God’s honor (Job 1:6-12; Zechariah 3:1-2). Satan becomes increasingly hostile in later Jewish views of his identity. He disrupts the relationship between God and Israel by temptation (1 Chronicles 21:1), by accusation (Zech 3:1), and by interference in Israel’s history. He may be resisted by good decisions, human merit, external aid, or by God himself. (Bromiley, 151)

Gradually, Satan’s identity shifts from divine employee to God’s chief competitor. This is in part the result of Persian influence on Judaism, for their belief system viewed world history as a struggle between forces of good and light and forces of evil and darkness, each represented by various angelic and demonic beings. Satan becomes the force of evil in the world. All sorts of extant legends and images about evil stick to him as if he were a snowball rolling down a hill. These include the serpent of paradise, an ancient dragon, an exalted angel expelled from heaven, and the evil impulse which resides within each of us (Genesis 4:7).

By the time Jesus meets him in the wilderness he is no longer working for God, testing Jesus to make sure he is worthy of the messianic mission. He is an independent contractor, seeking to persuade Jesus to betray that mission and side with the kingdom of this world. The gospel of Mark views the present time as one of a showdown between God’s rule as inaugurated by Jesus and that of Satan.

In Mark’s Gospel, Satan is always behind the opposition to Jesus, no matter who or what the vehicle may be. In our scene from Mark 3, Jesus is hemmed in by critics, lobbing accusations at him. In this case it is his own family and a delegation of scribes from Jerusalem.

Jesus’ family appears at the beginning and end of this passage (3:22 and 3:31-35). In verse 22 we learn that they have heard stories of his Capernaum ministry and have come “to restrain him, for people were saying, ‘He has gone out of his mind.’ They have come to retrieve him and check him into a sanatorium for an extended period of rest and reality therapy. Before they get a chance to, though, another group pushes in ahead of them with an even more serious criticism.

A delegation of scribes from Jerusalem arrives on a campaign of defamation. These scribes question, not his sanity, but his spiritual allegiance (178). Jesus’ exorcisms have been a prominent part of his Galilean ministry.The perception is now widespread that Jesus has authority over unclean spirits. These scribes attribute that authority to his being in league with their master, Beelzebul, a term Mark uses as a name for Satan.

Jesus’ response to the scribal delegation from Jerusalem (3:23-28)

Jesus’ response is to point out the nonsensical character of the charge. Why would Satan cooperate with Jesus’ attempts to destroy him?

Jesus is brusque to the point of rudeness. In the gospel of Mark, “If doing the will of God (verse 35) involves the incomprehension and even hostility of one’ family this is a price worth paying.” (France,178)

We aren’t told how this scene ends. We assume his words were relayed to his family and they turned around and returned to Nazareth. He went on to teach, heal, exorcize, feed and forgive. He went on to match his will and power against that of the Adversary, the Satan, the Diabolos, Beelzebul.

R.T. France, The Gospel of Mark: A Commentary on the Greek Text. William B. Eerdmans Publishing Company, 2002.