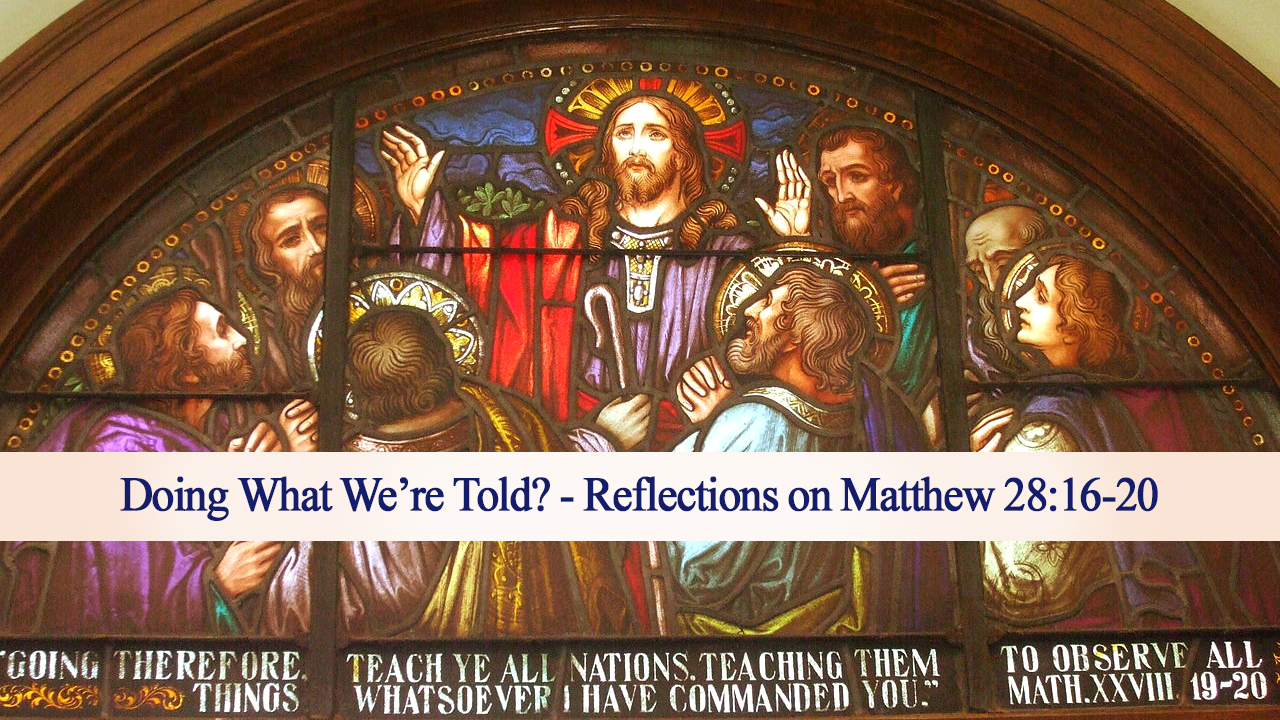 Somebody Didn’t Do as He Was Told…

How good are you at doing what you’re told? For me, it all depends on who’s doing the telling.  Throughout the account of Jesus’ death and resurrection there are a whole lot of examples of people telling other people what to do and what not to do. Pilate tells the religious authorities “You have a guard of soldiers. Go make the tomb as secure as you can.” (Mt 27:65) They did what they were told and sealed the stone.

Some of the guard go the priests to tell them about the miraculous events they have witnessed. They are told to say his disciples stole the body and they are paid off. At this point, somebody breaks rank and doesn’t do what they are told. Because If everyone in the guard had done what they were told - if they kept had quiet about earthquake, rolled stone, and angel, if they had instead spread the grave robbing story, how do we explain the next sentence: “And this story is still told among the Jews to this day?” (Mt 28:15)

Apparently, some member of the guard did not do as he was told. Somebody spilled the beans, leaked the story, engaged in an act of civil disobedience. And in doing so, they anticipated Jesus’ commandment that was to come in Matthew 28:16-20. Somebody started spreading the good news that alone can overcome the bad news.

And now it’s our turn.

In this closing scene from Matthew’s gospel, we are clearly told by a trusted source what to do: “Go and make disciples of all nations, baptizing them in the name of The Father and of the Son and of the Holy Spirit, and teaching them to obey everything that I’ve commanded you.” (Mt 28:19-20)

The location of the instructions, a mountaintop, underscores the importance of obeying the instructions. Mountains in Matthew’s gospel are places where Jesus’ authoritative teaching and divine identity are revealed. They include the mountain in the temptation where Jesus rejects false authority (4:8), the mount on which Jesus teaches with authority (5:1), the mountain on which the feeding of the four thousand occurs (15:29), and the mountain of the Transfiguration (17:1). (Patte, 398)

Obedient to the women’s command, the disciples have gathered. Well, eleven of them at least. The phrase “the eleven disciples” (28:16) instead of the customary “the Twelve,” reminds the reader of Judas’ betrayal and Peter’s denials and that all were scattered, scandalized by Jesus’ death (26:30-35). It is to these less than perfect disciples that Jesus gives the responsibility and authority to “make disciples of all nations.” (28:19a) (Patte, 397) Apparently, we don’t have to have perfect pasts to take Jesus’ message into others’ futures.

“ When they saw him, they worshiped him but some doubted” (28:17) It would seem that those who worshiped Jesus had some hesitation mingled in with their worship. Jesus entrusts authority to make disciples to doubting disciples. There is a contrast between these disciples and the women. The women, when seeing Jesus, worship him (28:9). Their fear does not cancel out their joy, worship or obedience.  The disciples do not initially acknowledge that it is God’s power that raised Jesus. The women never questioned this. (Patte 398)  Even the guards and the priests and elders showed a little bit of faith, in the form of the fear that God was behind the empty tomb. Why else go to such pains to stage a cover up?

By contrast with the disciples in Mark, who never seem to learn much, the disciples in Matthew do grow in faith. They are a work in progress. In Matthew’s gospel, Jesus’ pet name for the disciples is “little faith ones.” (Mt 6:30; 8:26) Faith the size of a grain of mustard seed is all they need, and it is enough. After the resurrected Jesus speaks to the disciples at the end of Matthew’s gospel, they believe. As a mentor once told me, “It’s not where you start out, it’s where you end up.” They get there eventually, if not immediately. The witness of the rest of the New Testament shows us the disciples preaching, teaching, healing and sacrificing their lives when necessary. (Patte, 399) Jesus’ commission to make disciples of all nations comes with the assurance that he will be with them to the end of the age.

Clearly, we are to do what Jesus tells us to do. The goal of the Christian Church is to make disciples for Jesus Christ for the transformation of the world.  The message of this closing scene in Matthew is that any and everybody is called to make disciples any and everywhere. With no excuses, no postponements of justice, and no obstacles that God can’t do something about.

Bob Ekblad in his Book Reading the Bible with the Damned, a book based on his ministry with prisoners and small group Bible study, tells of a conversation with a prisoner named Manny who was in a period of depression.

Do you feel God's Presence there with you Manny?" I ask.

Manny told me how he and Pookie, another guy I know who happens to be in the solitary confinement cell on the floor directly above him, have been talking. He told me how they discovered that if they flush their toilets at the same time, emptying the water between them, they can talk through the toilet bowls.

He tells me that just that morning he had read a Psalm to Pookie.

Jesus has told us clearly what to do. How good are you at doing what you are told? How good are we at not allowing arrogance, negative patterns from the past and doubts to hold us back from making disciples for Jesus Christ? We can’t afford to wait until we are perfect and conditions are optimal to make disciples. Recent events show how deeply mired our nation is in systemic, cyclical racism and violence. These times call for disciples who are willing to speak out, acknowledging their own complicity and despite their fears of opposition.

It’s past time to remain forever trapped on the mountain in this closing scene from Matthew, mired in doubts and excuses.

When I need motivation to move off that mountain, I look to the unsung, unlikely, unknown evangelist and practitioner of civil disobedience in this story: that anonymous member of the guard who could not bring himself to keep the good news a secret.

Daniel Patte, The Gospel According to Matthew: A Structural Commentary on Matthew’s Faith, Fortress, 1987