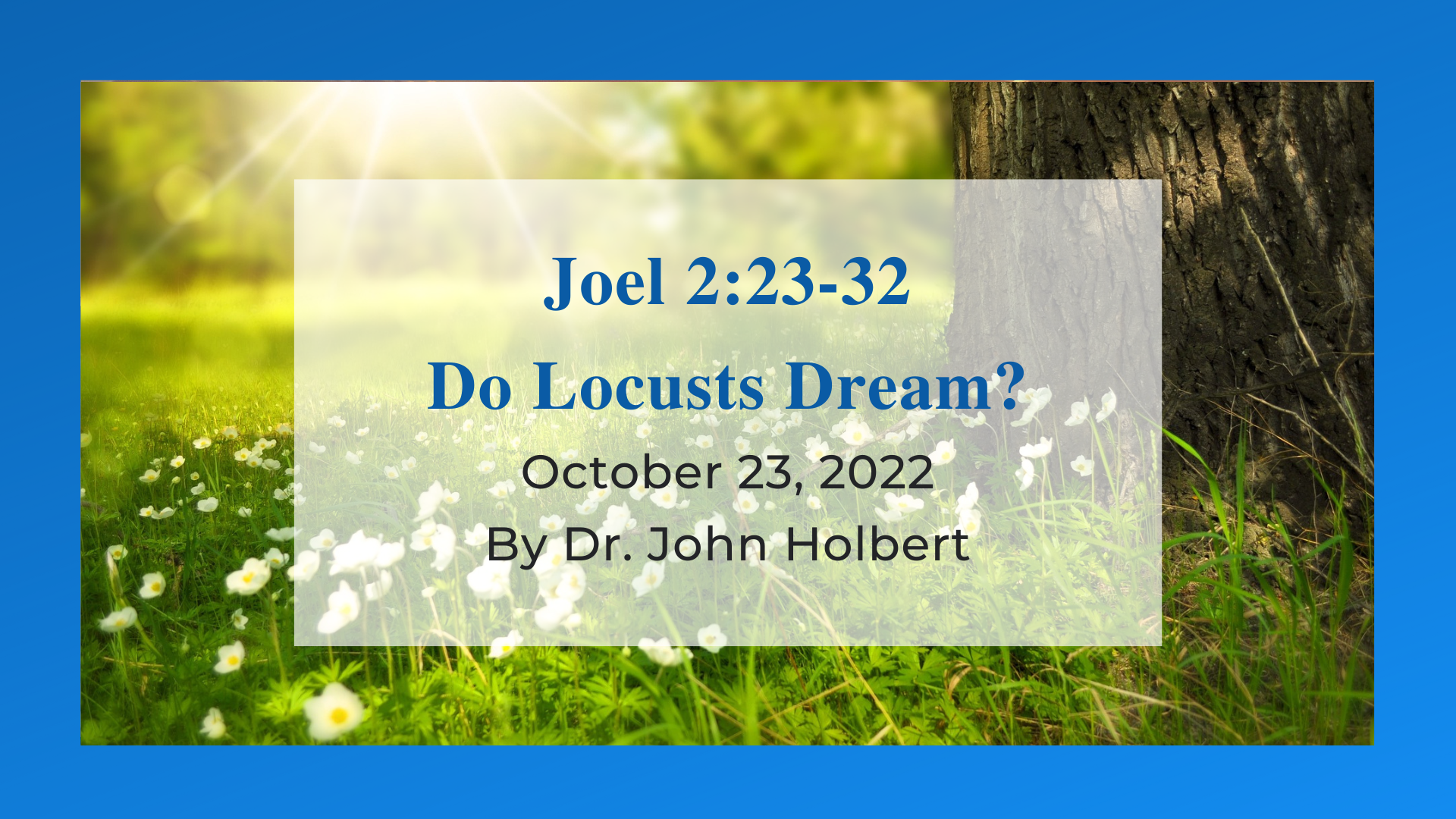 The prophet Joel has long been a slippery customer when it comes to dates, provenance, and ultimate meaning. Concerning when it was written, guesses have been anywhere from the 9th to the 4th centuries BCE, with the bulk of interpreters opting for the later dates, at least post-exile (6-5th century). Where it may have been written is anyone’s guess. There are very few obvious historical references, even in the first verse where other prophets are set in some historical context. And the meaning is elusive. The first part of the book (roughly chapters 1 and 2) describes a huge plague of locusts and connects that plague to a kind of apocalyptic coming of armies to devour the land of Israel. Then in chapter 3 all of that is reversed, as the fields and vineyards once again produce fruit and the people are restored to their former greatness in what is called “in those days and at that time” (Joel 3:1), a fairly typically vague future when YHWH returns to their land with blessing.

Joel offers very little in the way of the usual prophetic attack on injustice and unrighteousness, no direct references to the plight of the poor and marginalized; there are no reminders of the language of Amos or Isaiah, or Jeremiah. Indeed, by far the most famous lines in the book are found in 2:28-29 (3:1-2 in Hebrew). Here YHWH promises famously to “pour out my spirit on all flesh.” Sons, daughters will prophecy, while old men will dream dreams and young men see visions. Even male and female slaves will receive the spirit of God “in those days.” Those words, of course, form the center of Peter’s great Pentecost sermon in Acts 2, as the Holy Spirit is poured out on the crowd visiting Jerusalem, and the Christian community is birthed into existence. Joel’s words, whenever they were written, have become a hallmark series of phrases for Christianity ever since.

But I am still stuck back in the locust plague. I have long been fascinated with locusts, who are in effect grasshoppers hopped up on steroids—or something. Scientists still are confused about just what happens to the usually docile grasshopper to transform it into a veritable cloud of uncontrollable destruction. Plagues of locusts have hammered human agriculture from the beginning of recorded history, and no doubt well before that time. V.M. Dirsh classified Saharan locusts in 1974 as a subspecies of the good old American locust, well-known in the USA. I witnessed a true plague of locusts in Phoenix, AZ, during my growing-up years there. I was perhaps 10 years old, and I saw the street lights come on at noon as literal clouds of buzzing, clacking insects descended on shrubs, trees, and plants of all kinds, and ate their way for an entire day and night through the city. Piles of the things made simple walking a squishy, crunching nightmare for several weeks. That same desert locust inhabits and breeds in the vast desert stretching from Saharan Africa through the Arabian peninsula and into Western India which includes the Sinai Peninsula and Judean desert. It was such a plague as that that inspired Joel to see in the insect hordes a judgment of YHWH.

Joel recognized all too clearly that the locust swarm that he witnessed was no mere human inconvenience, a slightly mundane difficulty for human society. Though such infestations in our world are at least partially controllable by insecticides, nevertheless such a locust plague poses a threat to human society every bit as serious as any military invasion; in fact, Joel sees his insect horde in precisely those terms (1:6; 2:1-11).

I also see it in environmental terms today. Though we humans imagine that we can control the environment in which we live, through impenetrable walls, floors, and ceilings, or through chemical protections, nevertheless creatures of all varieties find their way among us. I live in southern California, a place well-known for a dearth of the insects that plague so much of the USA. I moved here 5 years ago and was told, with a certain glee, that critters like mosquitoes and snakes and other sorts of vermin were simply not a problem here. Wrong! We do have increasing numbers of mosquitoes, along with a surfeit of rats and mice, both of which I observe regularly around and near where we live.

Despite our supposed mastery of our environment, our conviction that Gen.1’s divine command that humans can “be monarchs” over their environment, can indeed “subdue” it, it has been shown again and again that we are not in fact masters of much of anything. Our current climate catastrophes—too little fresh water, too much fire, too much ocean water, and that water warming to dangerous levels—tell us that our supposed control is no control at all. Like Joel’s plague of locusts, we are increasingly plagued by a terrible collection of events that are well beyond our control. We, like Joel, can only hope for a time when YHWH will provide “mountains that drip sweet wine, hills that flow with milk, stream beds full of water” (Joel 3:18). Meanwhile, we are promised the prophecies of young and old, male and female, and the dreams and visions of a better life for all of the earth’s inhabitants. I doubt locusts dream, save visions of the next blade of grass. But YHWH provides visions and dreams for many, both old and young, and it is those dreams of a renewed earth that we must hear and enact if we are to avoid the locust plague of environmental disasters that we all face.