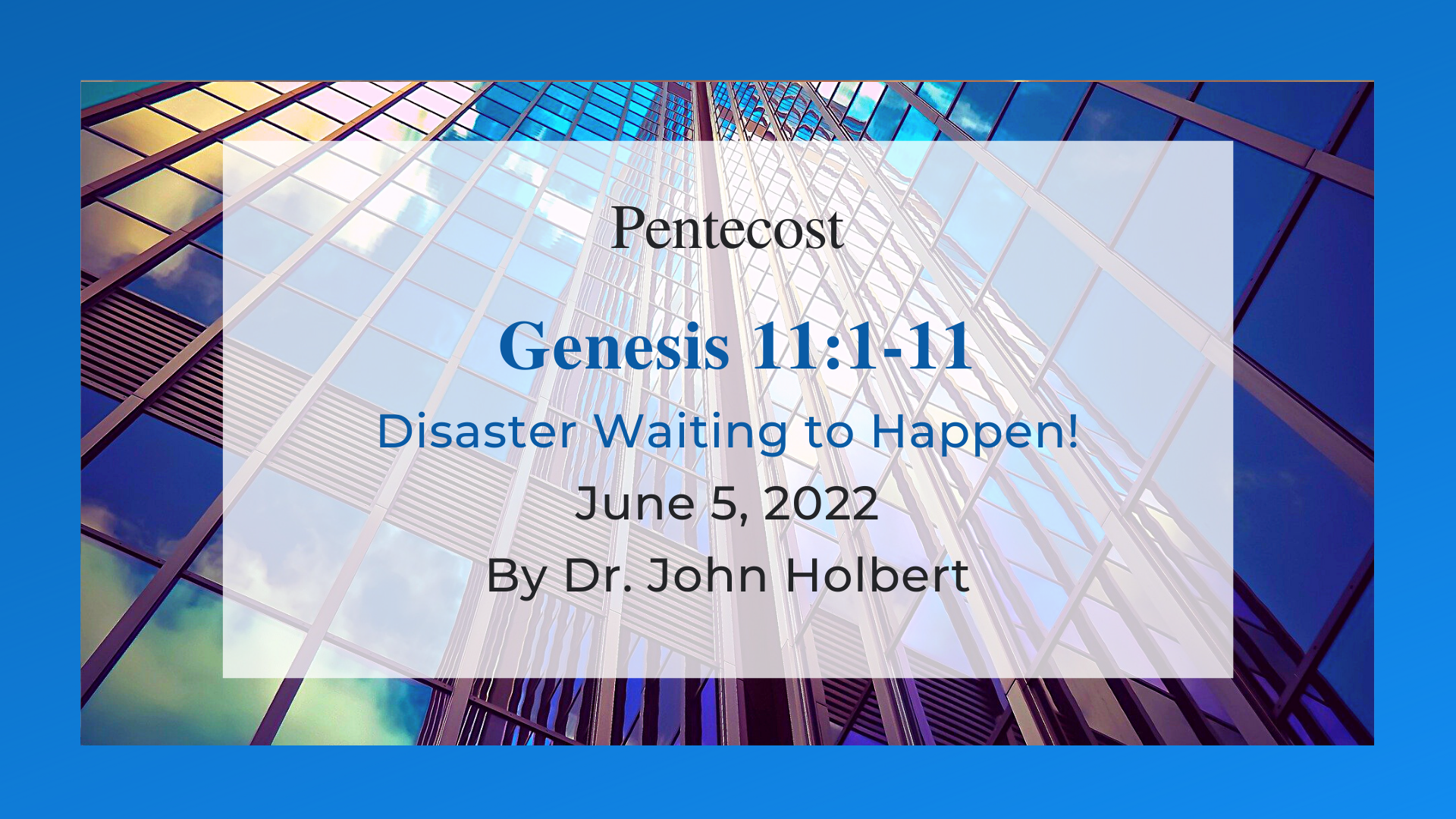 It has long been noted that there are obvious connections between Gen.11, the tale of the tower of Babel, and Acts 2, Peter’s sermon in Jerusalem, the coming of the Holy Spirit, and the inauguration (sometimes said to be the “birthday”) of the Christian Church. The usual notion of the connection is the concern with languages. In the Genesis story, YHWH takes a long look at the massive tower that the settlers in Shinar are in the process of constructing and decides that their actions will simply not do. As a result, YHWH “confuses their languages,” making further communication between and among them impossible, and then “scatters them over the surface of the whole earth” (Gen.11:8). Their common tongue—presumably something like “Noahese”?—has now been muted and replaced by the myriad languages that Hebrew writers confronted in their own time, a polyglot of ancient Near-Eastern speech.

The story of Pentecost is in one sense an obvious reaction to that linguistic disaster. As the Holy Spirit descends on all who gathered that fateful day, persons from every nation and land—the long list is in one way inclusive of all peoples—no longer are they separated by their many languages. In the light of the Spirit’s coming, each one is now able to hear the Gospel “in their own native language” (Acts 2:8), despite the fact that the curse of Babel and its huge number of tongues has heretofore divided them from one another. Hence, Babel’s pain has been turned to surprising joy, as the division of tongues had been overcome by the Holy Spirit. Let us be quite clear: this text is not speaking of the miraculous gift of glossolalia, that ecstatic speech practiced by Paul, among others, in the early church. At Pentecost, no one needs an interpreter; they hear quite clearly the Gospel spoken in their own native tongue. That is plainly one way that Pentecost recalls the tale in Genesis.

But it is not the only way the two stories find connections. It is often overlooked by readings of the tower tale just why YHWH determined to force the builders of Shinar to abandon their massive project. It is often claimed that YHWH is somehow fearful of these builders and their prowess, and says in dread, “Just watch! They are one people, and they all have one language; this is only the start of what they will do. Nothing they decide to do will now be impossible for them” (Gen.11:6). Readout of its context, YHWH’s statement could be heard as fear of the great skill of these castle constructors. However, two claims of the text itself determine for us, and for YHWH, that fear is not the chief motivator of YHWH’s sharp rejection of this construction project.

The people of Shinar propose to build a tower “with its top in the sky,” seeking to make a name for themselves and avoid thereby scattering on the surface of the earth (Gen.11:4). That sounds a very ambitious and noteworthy plan, but there is immediately a huge problem: “they had brick instead of stone and pitch instead of mortar” (Gen.11:3). This is a crucial observation. Surely, an Israelite wrote this story, and as all Israelites knew very well the one thing the land of Israel had in plenty was stone. Indeed, one thing every Israelite farmer could count on as he plowed his field was a surfeit of hard stone. Even now in contemporary Israel, all new buildings are to be constructed of stone. It is of course true that in Babylon, building was often done with mud-dried brick, a perfectly fine source of building blocks in an exceedingly dry country as could be found in the land between the great rivers of Tigris and Euphrates. But no sane Israelite would dare construct any tower of mud brick! Nor would he use pitch or tar to cement the bricks together; he would use mortar to ensure a solid structure. In other words, these Shinar builders are about to start construction with ridiculous materials; they are doomed to failure. The tower is a disaster waiting to happen!

Thus when YHWH states that “anything they decide to do they will do, what YHWH means is they may determine to build a mud-brick bridge over the Mediterranean! No Israelite builder would build an outhouse out of mud brick and pitch, let alone a sky-topping tower! YHWH stops them because they need to be saved from their own lunacy. Just like the man and the woman in the garden of Eden, who imagined they would “be like gods” and know everything, but instead ended up sewing scratchy fig-leaf aprons to cover their naked bodies, so here these people of Shinar on their own are in the process of creating a shakey and pathetic edifice that threatens to fall on their own heads. In Eden, YHWH urges the first couple to shed those horrific fig-leaf cloaks and put on instead pleasant garments of animal skin, gifts from a gracious God. Likewise, at the scene of the tower, YHWH confounds their language to save them from their own idiocy. In response to all that, Pentecost provides the mechanism to bring all people back together, shorn of their foolish divisions, united by the power of the gospel of God.

And a second fact may be noted. Hilariously, YHWH is said to “come down to view the city and tower that these mortals have begun to build” (Gen.11:5). They may imagine that the tower’s top will be right up to the sky, but YHWH cannot even see it where YHWH lives, but must come down to have a look! Similarly, the Holy Spirit “descends as tongues of fire” and rests on each person there at Pentecost. Whenever humans act on their own to solve their problems, leaving God out of the action, the result is disaster. Surely, that may be one of the Bible’s central teachings: without God, we humans sew fig leaves, build mud-brick towers, invade sovereign countries, attempt to impose our wills on others, paying no attention to them or to the God who loves them. History says over and again that arrogant human action leads only to disaster, ever waiting to happen. Will we never learn?