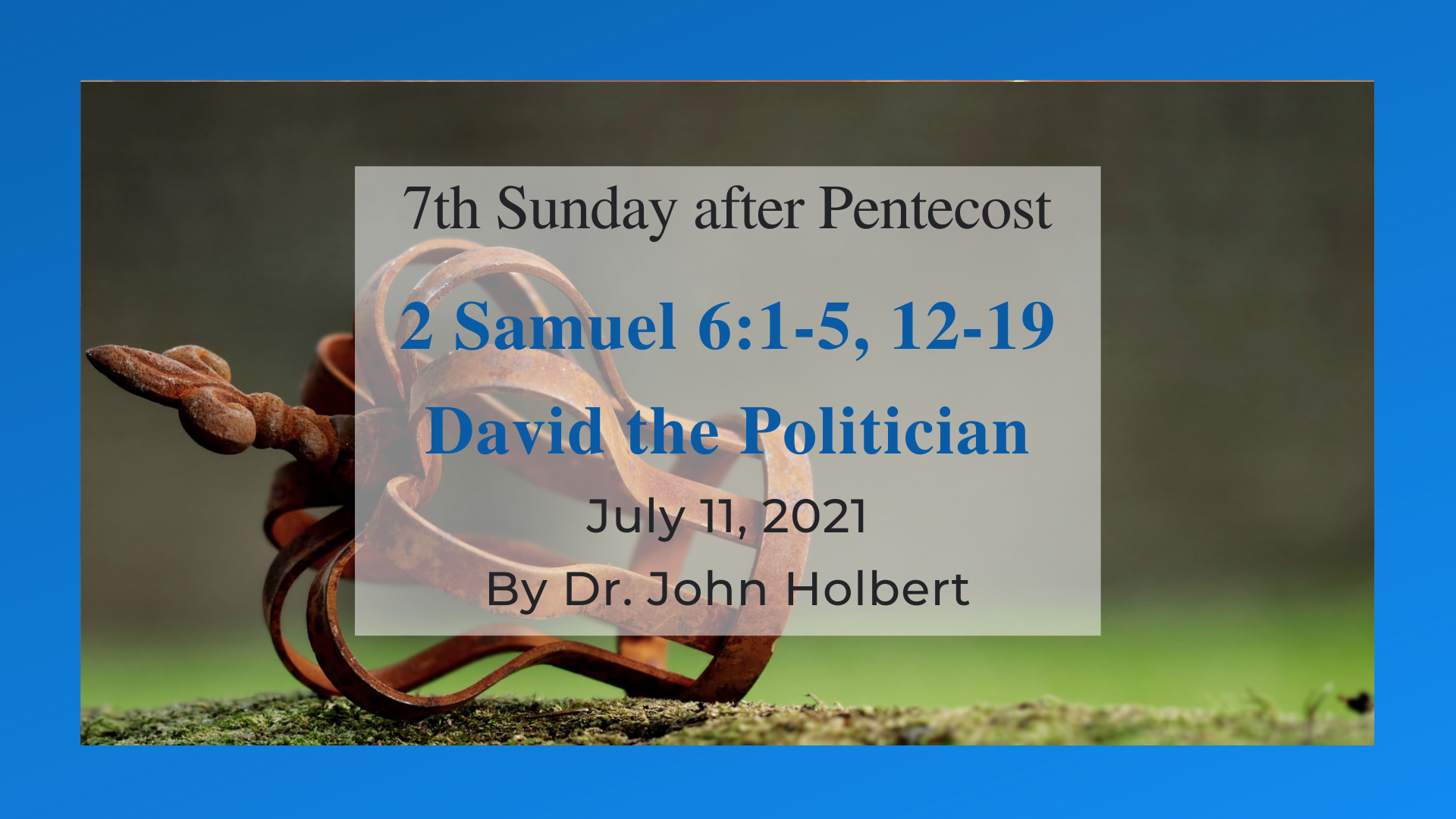 David has been crowned king of a united Israel, and at least one of his potential rivals, Ishbaal, Saul’s son, has been assassinated by two ambitious men, eager for favor with the new king. Unfortunately for them, their gift of Ishbaal’s head leads directly to David’s revulsion and fury, and then to their murder at the hands of the king’s bodyguards. David can never allow the random killing of anyone who could be termed “YHWH’s anointed,” since of course, David falls in that category, too. In addition, the Philistines have been dealt a crushing defeat in the valley of Rephaim. All events have conspired to solidify the throne for David. He only lacks one thing: a major religious symbol around which the people of Jerusalem may rally. The fabled ark of the covenant will be just the thing.

That famous chest of wood, supposedly containing the tablets of the law brought down from Sinai by Moses, has lain for decades in a field belonging to Abinadab, perhaps a high priest among the Gibeonites, charged with attending the sacred box. It apparently was moved to Abinadab’s hill from its spot in Beth Shemesh where 70 men had died at YHWH’s hand for “looking into” the ark, suggesting that somehow they had mishandled and profaned YHWH’s sacred box. David is reminded of that ancient object and realizes that its removal to Jerusalem is the perfect act to seal his religious bona fides with his followers in the new capital of the kingdom. Hence, he gathers an enormous contingent of his people—30,000 we are told—in order to bring the ark back to the city of David. The official name of the ark is given at 2 Sam.6:2: “The Ark of God, which is called by the name of YHWH of the armies, who is enthroned on the cherubim.” David puts the ark on a new cart, and while Abinadab’s two sons, Uzzah and Ahio, drive the cart, David and “all the house of Israel” were dancing before YHWH with all their might “with cypress woods (percussion instruments?), lyres, tambourines, castanets, and cymbals.” It is a scene fully worthy of a modern political rally!

But then, a mysterious tragedy strikes. The cart is “shaken” somehow, the oxen pulling it stumbling, and Uzzah “puts out his hand to the ark of God and took hold of it (to steady it?),” and the fury of YHWH is kindled, and Uzzah dies at YHWH’s hand “because of his error (the text is difficult here)” (2 Sam.6:7). Just as in the earlier scene (1 Sam.6:19-21) when the 70 died for looking into the ark, so now even touching the ark is seen as sacrilege worthy of death. However one understands this strange series of events, we are to believe that the ark is YHWH’s throne and is thus charged with dangerous and divine energy. Perhaps that scene in the first “Indiana Jones” movie when the evil Nazis pry off the ark’s lid and are horribly consumed by the spirits dwelling therein is not so far away from the awesome power the ark is said to possess in the ancient tradition.

YHWH’s fury at Uzzah is then matched by David’s fury (the same word is used—2 Sam.6:8)) at the whole event. The king is obviously frustrated in his political purpose and begins to wonder whether he will ever be able to bring the ark to Jerusalem. Just to be sure of its ultimate safety, he carries the chest to the house of Obed-edom the Gittite in order to see if the object will be finally tamed enough for use by the new king. Three months later, David is told that the household of Obed-edom has been richly blessed, so David repeats his earlier processional act, but this time slows the pace of the ark’s movement to allow a sacrifice of ox and fatling every six paces (!), an inordinate and costly series of ritual actions, but apparently necessary to secure the dangerous box for David’s employment. Also, this time David dresses himself in a “linen ephod,” an overtly priestly garment, announcing to the people that David is both king and priest. It also does not hurt that the ephod is a short and brief garment, tied around the hips or waist, so as the king “whirls and leaps” in his wild dance, it is quite likely that he exposes himself quite shamelessly, as his lonely and enraged wife, Michal, will later accuse him (2 Sam.6:16, 20-23).

The huge procession winds its way up to the city, led by the whirling David, and upon entering he leads the ark to a tent prepared for it, in which whole burnt offerings and offerings of shalom are made. “When David had finished offering the offerings, he blessed the people in the name of YHWH of the armies, and distributed food among all the people” (2 Sam.6:18-19). David acts here as priest,  as king, and as provider for his people, the source of all power in the land. The ark’s coming has done its work; David appears as nothing less than the conduit between YHWH and Israel. In short, he has at last supplanted the old and now deceased conduit, Samuel, making himself the absolute master of the land.

With every successive step, from his killing of Goliath to his flight to the Philistines to his superb poem over the death of Saul and Jonathan, to his moving of the sacred ark to Jerusalem,  David has at last become absolute monarch in Israel, his goal for many long years. His political instincts are nothing short of magical, as the inevitability of his kingship is finally realized. And all along the way to the throne, David has tried to show himself as overtly religious, while at the same time, less overtly, he is equally convinced of his own destiny to be king. It is this complex David, man of God and man of unbridled ambition, who will fall into error and evil as his God recedes more and more from his eyes, and his ambitions and lust take control. It is a tragedy played out over and again in the world’s history, and one that serves as a model for any who would forget the love and challenge of God in order to revel unchecked in their own desires.