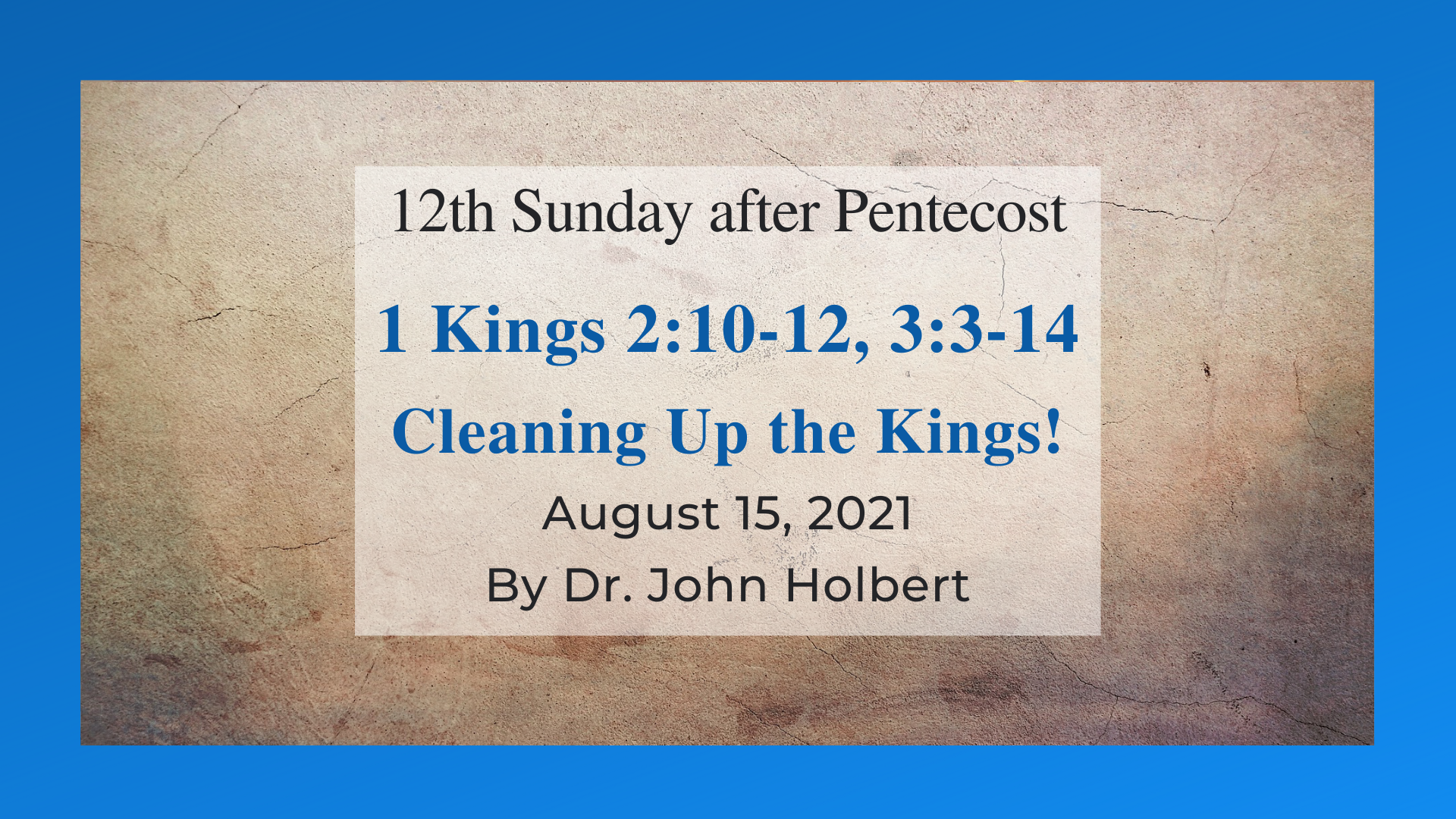 Cleaning Up the Kings!

The end of David’s long life is truly and deeply problematic. There can be little question that a later, more pious, editor has done his level best to sweeten and soften the life of Israel’s greatest king, but the story is too riveting, too grand in its sweep and power that we are left not with a David who can serve as some sort of religious model, but rather with a human being of rich complexity, much more a Mafioso don than a pious paragon. A few centuries later, the author of the Chronicles will attempt to remake the image of David, turning him into “the sweet singer of Israel,” but his portrait has played a smaller role in the ongoing afterlife of King David, being mostly swept away under the vivid and colorful picture offered by the earlier author(s) of Samuel’s books. No better example of this truth can be found than in the narrative concerning David’s death, followed by the whitewashing of King Solomon’s early kingship in today’s text.

At 1 Kings 2:10-12, the narrator coolly announces: “Then David slept with his ancestors, and was buried in the city of David.” A very stylized number of 40 years is provided for the length of David’s reign, and the section concludes with this: “Solomon sat on the throne of his father David; and his kingdom was wholly unshaken” (or “firmly established” NRSV) (1 Kings 2:12). What exists before that “firm establishment,” that “unshaken” throne, is a series of terrible and quite monstrous interchanges between the dying David and the eager Solomon. First, the faithful Joab, general of David’s army for all the years of his ascendence and reign—well over 50 years—must be dispatched “with blood” because he chose the wrong horse at the the last. Joab imagined the elder son, Adonijah, as the heir of David, but Bathsheba and Nathan had other ideas and cleverly goaded the ill David into making Solomon king instead. And because Joab is a formidable man, he must be dealt with; David bids Solomon to have him killed, which the new king dutifully does in a horrifyingly brutal manner (1 Kings 2:28-34). Then David turns for revenge on an old enemy, Shemei, who humiliated David during his expulsion from Jerusalem by his usurping son, Absalom. Solomon must arrange his death, too, closing the circle of any possible dangers to the Davidic-Solomonic reign. The new king arranges that murder as well (1 Kings 2:36-46).

So after all that killing, Solomon indeed sits on an “unshaken” throne, led there on a veritable river of blood. That stable throne is nothing else than a chilling reminder of the amoral and violent nature of David and his heir. But the “cleaning up” process of the entire episode of the transition of power begins in earnest in 1 Kings 3:3-14. In a dream directly from YHWH to the new monarch, Solomon and YHWH have a conversation. Still, just before the dream commences, something like the older author gives us a hint that Solomon may not be all that firmly committed to the worship and devotion of YHWH. “Solomon loved YHWH,” we are told, “walking in the statutes of his father David” (1 Kings 3:3a). Given what we have just read about his father David, we would be right to ask just what are those statutes? How have they led David to stay close to God, as he coerced murders all the way until his death? Then we learn that Solomon has a distinct problem: “he sacrificed and offered incense at the high places” (1 Kings 3:3b). Indeed, at the long-hallowed high place at Gibeon, “Solomon used to offer a thousand burnt offerings on the altar.” Perhaps we are to imagine that all that offering was to YHWH only, but later in the narrative, we learn that Solomon “loved many foreign women…who turned his heart away after other gods, and his heart was not true to YHWH his God” (1 Kings 11:1, 4). Thus all those sacrifices early in his reign may or may not have been for YHWH alone.

But after that discordant note, we read this: “At Gibeon YHWH appeared to Solomon in a  night dream; ‘Ask what I should give you,” intones YHWH (1 Kings 3:5). Solomon replies to this open-ended request from his God by uttering what might only be called pious treacle, claiming that YHWH has always been steadfast in love for “your servant my father David, because he walked before you in faithfulness and righteousness, and in uprightness of heart toward you,” and as a result he became king. And YHWH, now you have done the same for me, “even though I am only a little child; I do not know how to go out or come in” (1 Kings 3:7). Such sycophantic language sounds truly astonishing right after we have witnessed this same Solomon craftily and subtly, acting on the commands of his father David, effecting the murders of two elderly men in order to insure the stability of his throne. The speech sounds decidedly hypocritical and hardly to be believed.

Then the oily Solomon asks YHWH only for “a discerning heart,” eschewing any cry for riches or power (1 Kings 3:9). Not surprisingly, YHWH is quite pleased with this amazingly humble request and decides to give Solomon such a “discerning mind” along with all the other things for which he did not ask, namely the riches and the power and all the trappings of a Middle Eastern king. Lucky Solomon! His supposed humility has made him a grand king anyway. Given what we know of Solomon’s rule, it will become clear that he certainly strove for grandness, but in that striving his fabled discernment left him, as his people chaffed under his huge tax and labor demands, leaving them furious at his death, ripe for the kingdom’s division which occurred under the pathetic rule of his son and heir, Reheboam.

The editor’s attempt to clean up the figures of the story is a rank failure. No clever prose can cover the human greed, manipulation, and lust for revenge that are all too indicative of the reigns of both David and Solomon. The Bible will never let us forget that both of these men were human, both weak and vindictive, and ofttimes thoroughly unlovely. Creatures of God, as are we all, but humans at full stretch at the same time. So it is with the people of God, and so it always will be.