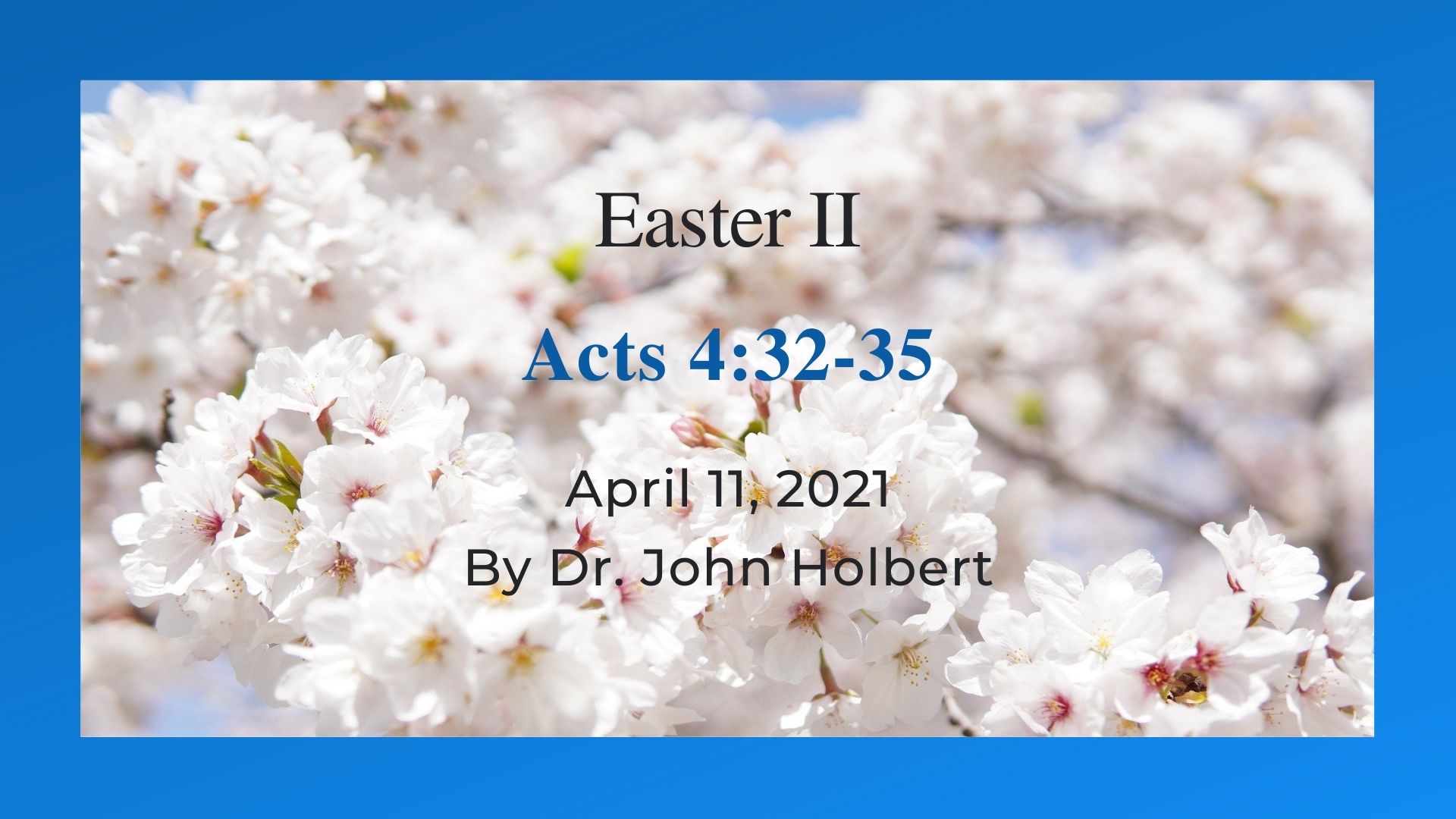 Post-Easter, the lectionary always turns to the Book of Acts in lieu of texts from the Hebrew Bible, a reality that I always dislike, but need to accept. I suppose I could merely substitute Hebrew Bible texts, but those of you who follow the lectionary that would be difficult. Hence, I will go with the Acts texts that I have done in the past, but will happily look at again. They offer rich insights into the rise of the early church. The Acts of the Apostles, by scholarly consensus, was written by the author of the Gospel of Luke, sometime late in the first century, well after the events it purports to address. There is necessarily a sense more of theological hopefulness than actual history in these texts. One might think of certain texts more as models for the community rather than real accounts of actual historical occasions. I suggest that today’s text is a classic example of that fact.

This is a text about the ways that Christian communities ought to be constituted if they profess to be followers of Jesus. It is highly unlikely to me that every early community actually acted in the ways described in Acts 4, though it would be grand if they had so acted. The account is highly stylized, a model for communities to emulate, however surprising that might sound in the ears of committed US American capitalists! I have long been astounded that this text exists in our tradition and has on occasion been used as a statement for proper Christian groupings. There is no other name that can be given to this scene than economic communism. It is not, at least specifically, socialism, though it is has been so called. Communism in its purest form is precisely what these early Christians are portraying. Of course, in US America, the use of the name “communism” raises all manner of difficulties for us. During the Cold War with the Soviet Union, their self-proclaimed communism was regularly contrasted with US American capitalism; the language was always “godless communism” vs. “godly America,” and since America was an overtly capitalistic country, communism was nothing less than a dangerous beast that was to be avoided and rejected. But it needs to be said that communism is merely an economic system that distributes all goods equally to all persons in the given group. Such a model may never have worked in reality—it surely did not in the Soviet Union—; it is a system that promises equal distribution for all. And that is exactly what this text says.

“Now the whole group of those who believed (that is, those who were grafted into the early community after Peter’s sermon in Acts 2) was of one heart and soul, and no one claimed private ownership of any possessions, but everything they owned was held in common” (Acts 4:32). This is the very definition of communism—everything held in common. It turns out that the connections between “one soul” and “holding all things in common” are quite frequent in Hellenistic literature (see, e.g. Plato’s Critias 110C-D); it may well be that Luke’s addition of the word “heart,” that Hebrew anthropological idea that includes will and intelligence, may be his attempt to give the phrase a more biblical feel. The phrase “all things in common” is a repetition of Acts 2:44, another description of the earliest community.

“Neither was anyone among them needy, for whoever owned fields or possessed houses sold them, and carrying the proceeds from the things sold, laid them at the feet of the apostles. Then distribution was made to each according to anyone’s need” (Acts 4:34-35). This description of the requirements of early Christian community actually moves beyond the classical announcement of a communistic economy, as delineated by Marx. “From each according to his ability, to each according to his need,” he said, but here the emphasis lies not at all on ability but equal distribution according strictly to need. This then is Christian communism. We should note, too, that it is the apostles, the leaders of the community, who are charged with the distribution. Thus, there surely is hierarchy in the community where the apostles are looked to for enforcement of all possessions in common and for their equal distribution. Luke immediately provides a human example of how this works.

“Joseph, who was called Barnabas by the apostles (the name means in translation “son of consolation,” that is, his overt characteristic is a person of comfort) was a Levite, a Cypriot by birth. He sold a field that he owned, brought the yield and laid it at the feet of the apostles” (Acts 4:36-37). “Be like Barnabas,” preaches Luke; he understood well what it meant to call oneself Christian! Do not be like Ananias and his wife Sapphira, who did not give all of their sales of goods, but held some back for themselves. Both of them, when their economic lies were revealed, died at Peter’s feet. Death awaits those who in this way “lie to God” (Acts 5:4). This grim little tale is designed to urge all community members to open their hearts completely for the good of all members. To those who have much, much will be expected, in order that there will be “no needy one among them.”

This reference to “no needy one’ is a direct reference to Deut.15:4: “When YHWH God blesses you in your land, there will be no needy person among you.” This blessing will be received under the condition provided in the next verse: “When you obey the voice of YHWH your God to keep all these commandments that I have commanded you today.” For Deuteronomy, the chosen community has “heard the voice of the prophet” and has shared its possessions, resulting in the blessings promised by God. However, in this same chapter of Deuteronomy the author admits freely “there will never cease to be some in need on the earth” (Deut.15:11). This of course means that the clear commandment not to allow there to be any who are needy is finally never completely a reality in Israel, no more than it is a reality, I fear, among the earliest Christian communities. Still, we are not taken off the hook, bleating with John “the poor you always have with you,” leading some to say, “what can I, one single person, actually do?” For those, Deut.15:11 continues with a direct divine command: “Open your hand to the poor and needy neighbor in your land.”

I am troubled and humbled by these texts from Deuteronomy and Acts. How far we US Americans, and I for certain, have fallen from this ideal! In our fabulously wealthy nation, said by some to be the richest nation in the history of earth, too many of our citizens suffer not merely from poverty, but from food shortages, are not merely unable to survive in the economy, but actually have little recourse when each month their money runs out. Our capitalist economy has not been successful for all who must participate in it. The rising tide of wealth for some has never lifted all boats, despite the claims of those who are rich, but rather has threatened many boats to capsize in that rising tide. It has become horrifyingly true that “we have poor always with us,” and their presence among us can lead us to act in one of two ways: either we throw up our hands in despair and say that is just how it is in our world, or we look again at the model of Acts and strive with all our hearts and souls never to be satisfied as long as there are any needy among us. This has been the Christian choice from the founding of the church, and each of us is called to make that choice now. This problem should never devolve into an intellectual struggle between competing economic systems, whether a well-regulated capitalism vs. command socialism or a pure unfettered capitalism vs. full-hearted communism. When there are needy among us, that is a sign that whatever the system being employed, it has not done what its Christian participants, at least, must hope for it. However we design our economy, for Christians, if there remain needy among us, that system has failed. The bottom line for Christians is a lack of needy among us; all other discussion is moot if that bottom line has not been met. The Book of the Acts of the Apostles, resting on the book of Deuteronomy, tells us so!