Centrality of God in the Reborn Community - Reflections on Haggai 1:15b-2:9 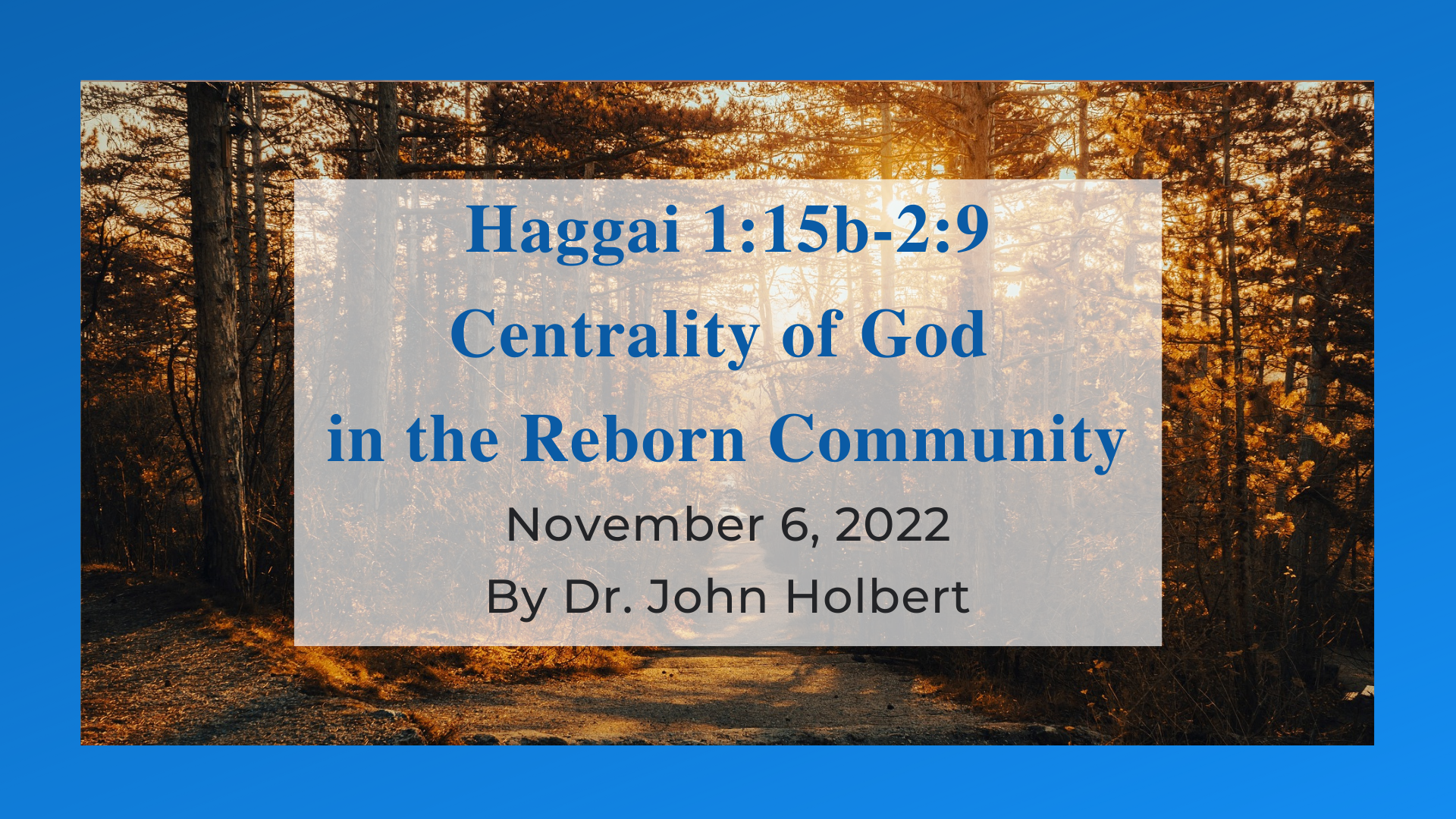 Centrality of God in the Reborn Community

The tiny book of Haggai is peculiar in several ways. First and foremost, it gives us the most precise dating of the events it describes in the entire scripture. We are told that this prophet—whose name literally means “pilgrimage feasts”—came to the ruined Jerusalem exactly on August 29, 520BCE, and ended his mission of rebuilding on December 18, 520BCE. The precision of these dates can be constructed from the information provided for us within the book itself, from the “second year of King Darius, in the sixth month, on the first day of the month,” (Hag.1:1) to “the twenty-fourth day of the ninth month” (Hag.2:18) of Darius’ reign in Persia. Though more than a few so-called biblical interpreters, but in reality, mere mountebanks, have tried to demonstrate how the Bible offers such calendrical exactitude, down to the day and the hour (Archbishop Usher calculated that the world was created in 4004 BCE, using biblical numbers), the fact is that only here in Haggai can we be so specific.

And why might that be important for a preacher? All need to tread very carefully here, because the Bible rarely majors in historical specificity, and just because we find it here in Haggai does not at all mean that we will find it elsewhere. In fact, we do not! But Haggai does in this way place YHWH directly in the center of all human activity. This is an important consideration in this particular time period in the history of Israel and Judah.

The Babylonians had destroyed Jerusalem in 587/586BCE and had left the city a smoldering ruin. The leaders of the community, king, court, priests had been carted off to the capital city of the empire, Babylon on the Euphrates River. And the exiles had remained there for two full generations until Cyrus of Persia captured Babylon, without much blood spilled in 539BCE, and had freed all those non-Babylonians trapped in the city, allowing them to return to their homelands, even paying them to do so. Little wonder Isaiah referred to Cyrus as YHWH’s messiah! (Is.45:1). Many of the former captives returned to Jerusalem, though others stayed in Babylon, forming there an important Jewish community that flourished for nearly 1000 years. The returnees were determined to rebuild the ruined temple and began the project almost immediately upon their return. However, as the book of Ezra recounts, some persons living in Samaria in the north of the land, having formed their own new Jewish community there, were equally determined to stop the reconstruction, and wrote a letter to the Persian court warning them that these southern Jews were a rebellious lot and would, if they did manage to rebuild the city of Jerusalem, cause the Persians no end of trouble (see Ezra 3:6-4:24 for details). The Persians quickly quashed the plans to rebuild.

But in 520 Haggai comes to the city and urges the inhabitants to get back to the rebuilding task. And they quickly do just that. After only one month of Haggai’s persuasive preaching, the process of reconstructing the temple is well underway. Though Haggai’s involvement in the task ends well before the building is completed, he was clearly the impetus that set the work in motion, and that eventually resulted in a rededicated temple in 515BCE.

The modern preacher should again be careful here. Haggai implies that the reason that the Judean community is struggling to survive and flourish is the fact that while they are living in “paneled houses” (Hag.1:4), the temple has been allowed to lie in ruins. Rebuild that, counsels Haggai, and you will witness wonderful prosperity. I well remember when a United Methodist Bishop came to my church to celebrate a new building we had constructed, sounding too much like Haggai as he claimed that we ought “do nothing shoddy for God.” This sounded blasphemous to me then some fifty years ago and sounds blasphemous still today. Gilded edifices do not automatically lead to prosperity and success. It could be said that a common task, around which a community can join together, may indeed lead to new energy and hope in that community, but grand buildings do not a Godly ministry make.

Yet, God through Haggai promises that the “splendor of this new house” will outstrip the wonders of the old, when YHWH “shakes the heavens and the earth,” along with “all the nations, so that the treasure of all nations will come” (Hag.2:6-7). You might recognize those words as one of the bass arias from Handel’s famous “Messiah.” I have sung it numerous times, though in modern performances the aria is sung by the alto. In the confines of “Messiah” the words take on a very different meaning than found here in Haggai. The point of God’s shaking in Haggai is to shake loose the gold and silver needed for a refurbished temple in Jerusalem. In “Messiah” the words become generic, referring to “the desire of all nations,” meaning Jesus of Nazareth. Thus are ancient words confiscated for very different uses half a millennium later.

Haggai mentions among his oracles two political figures who will play prominent roles in the reborn Jerusalem, Zerubbabel, the governor of the new province, and Joshua, the new High Priest. It is made clear, however, that neither of these men will in any sense be kings or rulers in the renewed Judah. Only God will reign there, and if the community is to survive and flourish, God must always be seen as ruler. So it was in ancient Judah, and so must it be in modern Christianity if we are to flourish now.