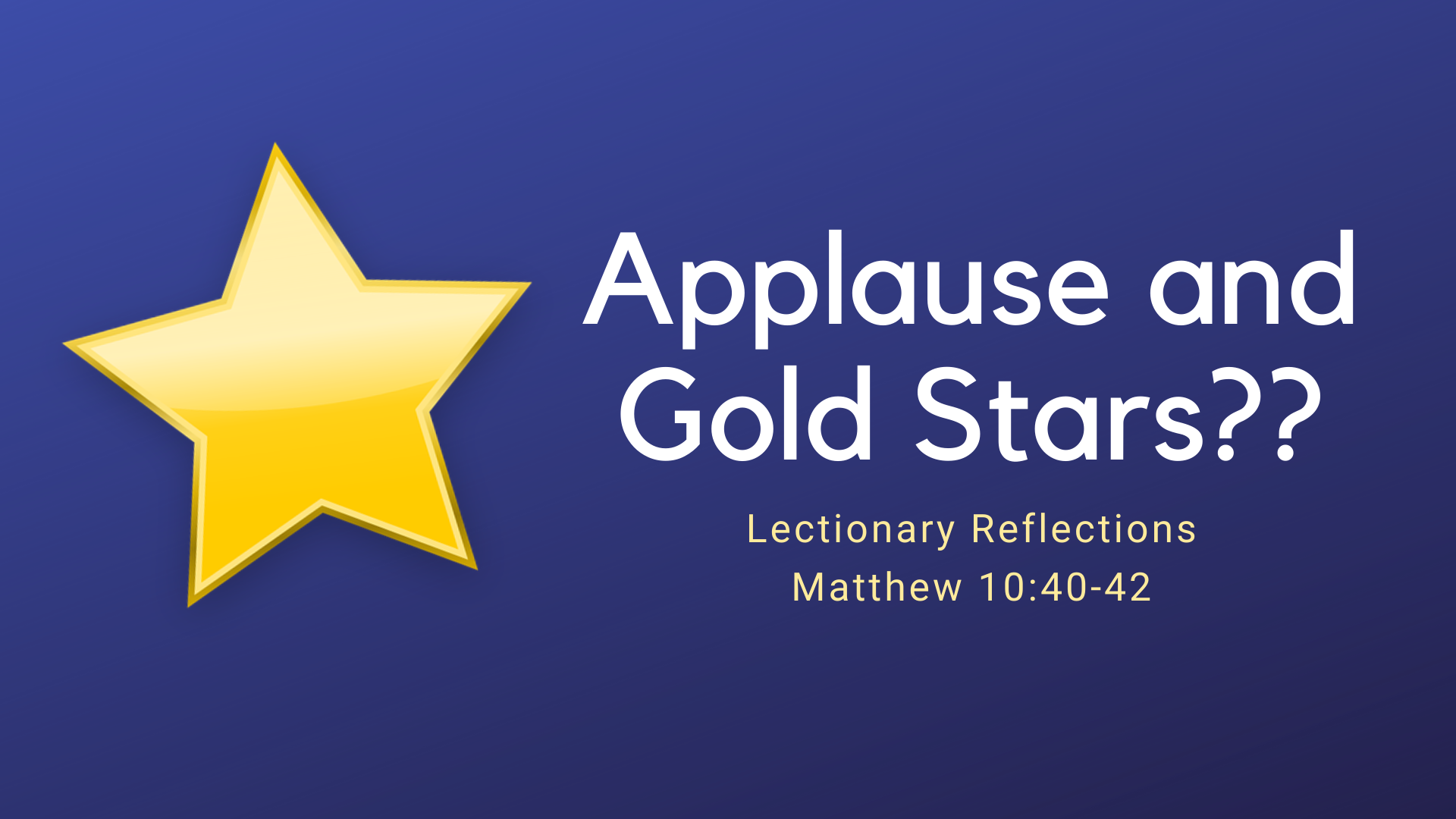 We all like to be rewarded for our efforts. Gold stars on our school papers as children. Praise from parents and teachers as we get older. Being recognized publicly with a round of applause or a plaque. We all appreciate recognition and benefits from our actions.

Jesus is promising a reward for those who welcome prophets and righteous persons to the community, and for those who offer small kindnesses to the vulnerable in their midst. That reward is participation in the kingdom of God, which has both a present and a future component.

This text comes after Jesus' promise that those who lose their life for his sake will find it (Mt 10:39). It's an answer to the question, "What is our reward for risking the loss of our lives as we know them for you?" Or, as Simon Peter so pragmatically puts it, "Look, we have left everything and followed you. What then will we have?"

There is much scholarly debate about the identity of the persons referred to in this brief passage: righteous ones, prophets, and little ones. In Matthew's gospel, the disciples themselves embody all three identities. Matthew emphasizes that disciples serving as Jesus' agents are his righteous ones and prophets, even greater than the prophets of old (Mt 5:11-12; 11:9; 13:17). For him, disciples were also little ones (10:42), the easily oppressed and powerless who depended solely on God (18:3-6, 10). (Albright and Mann, Anchor Bible Commentary on Matthew) The disciples are prophets (10:41a); they are the righteous (10:41b) who "let their light shine before men (5:16) as they minister to the towns and villages of Israel (10:11-14). And they are the little ones. They have nothing and might even be in need of a cup of cold water (10:42). (Daniel Patte, Matthew, 156)

Those who receive the disciples also receive the same benefits or reward they receive, the blessing of participation in the kingdom of God as outlined by Jesus by way of Matthew in the Beatitudes (Mt 5:3-10). The Beatitudes have a future, but also a present reference. The poor in spirit, those who mourn, the meek, those who hunger and thirst for righteousness, the merciful, the pure in heart, the peacemakers, those who are persecuted for righteousness' sake—all participate in the present in the blessings of divine presence, comfort, wisdom, forgiveness, which are the realities of the reign of God now and forever.

Participation in the kingdom of God is the reward of the righteous person. It is not wholly extrinsic like the gold stars and rounds of applause. The righteousness Jesus is talking about in Matthew carries with it an intrinsic reward, one that is an integral part of the action of welcome and kindness. Such righteous acts participate in and point us toward God. (Gingles, conversation about religious ethics)

Intrigued with this notion of intrinsic reward, I began collecting affirmations from a variety of historical and current figures.

"The most difficult thing is the decision to act, the rest is merely tenacity. The fears are paper tigers. You can do anything you decide to do. You can act to change and control your life; and the procedure, the process is its own reward."—Amelia Earhart (American aviation pioneer and author and the first female aviator to fly solo across the Atlantic Ocean, for which she received the U.S. Distinguished Flying Cross, 1897-1937)

"If people are good only because they fear punishment, and hope for reward, then we are a sorry lot indeed."—Albert Einstein (German-born theoretical physicist who developed the general theory of relativity, and one of the two pillars of modern physics, best known for his mass–energy equivalence formula E = mc², 1879-1955)

"The reward for work well done is the opportunity to do more."—Jonas Salk (American medical researcher and virologist who discovered and developed the first successful inactivated polio vaccine, 1914-1995)

"Love seeks one thing only: the good of the one loved. It leaves all the other secondary effects to take care of themselves. Love, therefore, is its own reward."—Thomas Merton (American Catholic writer and mystic, Trappist monk of the Abbey of Gethsemani, Kentucky, poet, social activist, and student of comparative religion, 1915-1968)

"The highest reward for a person's toil is not what they get for it, but what they become by it."—John Ruskin (British art critic, artist, social thinker, and philanthropist, 1819-1900)

"There are those who give with joy, and that joy is their reward."—Khalil Gibran (Lebanese artist, poet, and writer, 1883-1931)

"To give without any reward, or any notice, has a special quality of its own."—Anne Morrow Lindbergh (American author, aviator, and the wife of fellow aviator Charles Lindbergh, 1906-2001)

Reading these quotes, I get the feeling that these people are not doing good things for others solely for the resulting pleasure of feeling good about what they've done and about themselves. They are talking about giving one's life away for some purpose beyond oneself that, paradoxically, results in a gain. As Christians we would call that the reward of the righteous.

W. Argyle, The Cambridge Bible Commentary on the Gospel According to Matthew

Daniel Patte, The Gospel According to Matthew: A Structural Commentary on Matthew's Faith