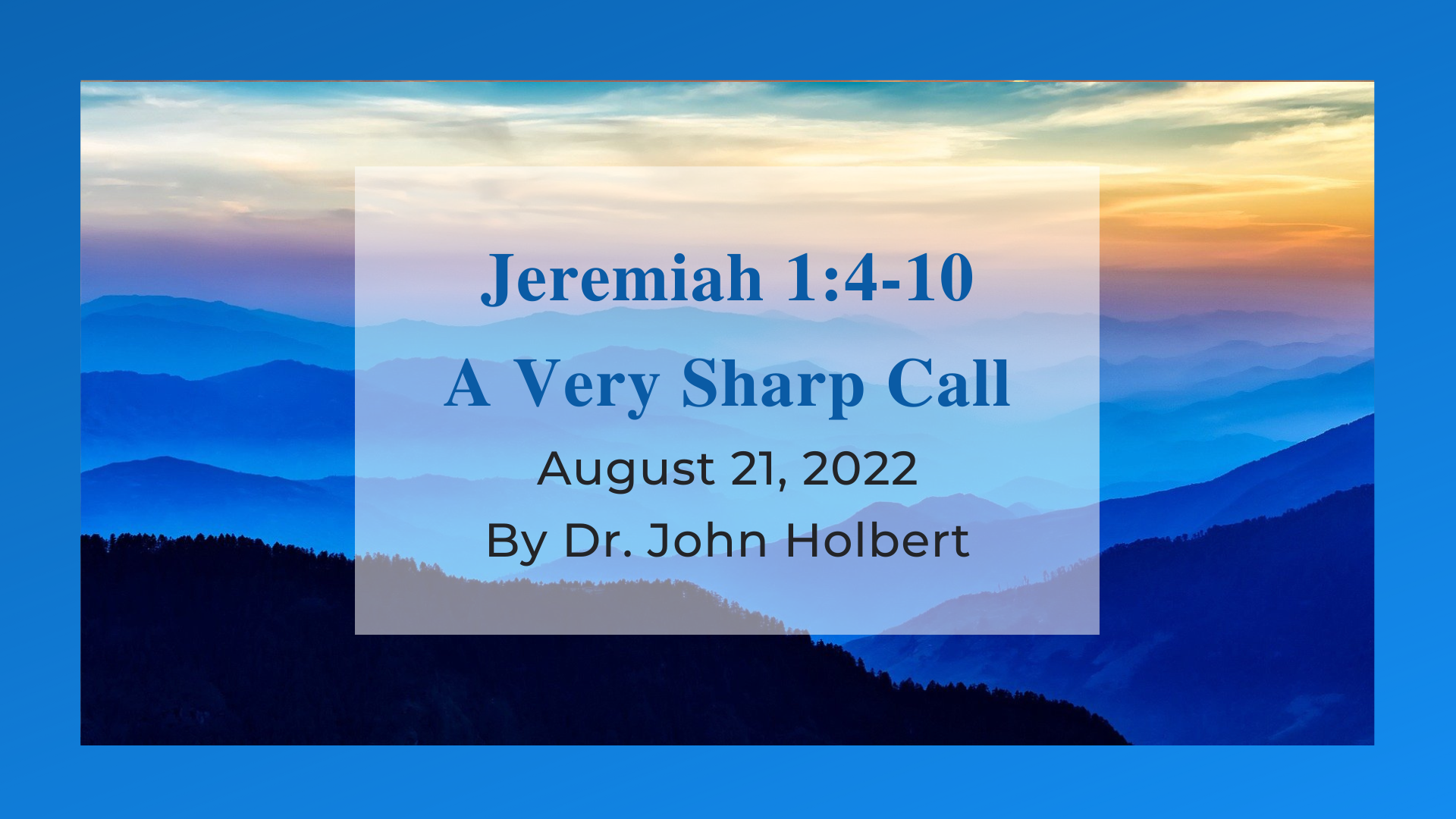 Today we begin a six-week perusal of sections of the sprawling book of Jeremiah, a complex collection of oracles, poems, and personal vignettes from the long prophetic life of Jeremiah, called by some the “weeping prophet,” although motivation for his supposed weeping is quite varied, from sorrow to anguish to fury to darkest despair during the course of his very long life. The shape of that life, its historical backdrop, is provided, at least in part, by the rich superscription to the book, clearly written after Jeremiah’s prophetic work had publicly ended (Jer.1:1-3).

This brief historical note contains several interesting facts. Jeremiah is said to have grown up in the village of Anathoth, a rather famous place in the land of the tribe of Benjamin, made notorious several centuries before Jeremiah’s birth. It was to Anathoth that the priest of King David, Abiathar, the last chief priest of the family of Eli, was exiled because he had chosen the wrong horse, Adonijah, in the struggle for the kingly succession after David’s death, a struggle eventually won by David and Bathsheba’s son, Solomon. Solomon made it plain that Abiathar deserved death for his fateful choice, but because the priest had carried the sacred Ark of the Covenant before King David, Solomon instead deposed him from the priesthood and sent him to live in Anathoth (1 Kings 2:26). Thus, we learn from this history that Jeremiah was born in what might be called a retired preacher’s home. As such, it is hardly surprising that the boy would have been called to prophesy by YHWH, since in such a place, the name of YHWH would have been regularly spoken of and discussed. Jeremiah early would have known of YHWH and YHWH’s actions and demands.

Furthermore, we are told that Jeremiah received his call from God “in the 13th year” of the reign of King Josiah (640-609BCE), a reforming king, deeply loved by the people, but who met a grisly end in 609 BCE, having been killed in a futile attempt to stop the progress of the Egyptian pharaoh, Necho, from marching up the Mediterranean coast, through Judean land, on his way to engage the armies of Babylon near Charcamish on the banks of the Euphrates river. Thus, Jeremiah, according to this chronology, became a prophet in and around 627BCE, and continued his ministry until “the 11th year of King Zedekiah, until the captivity of Jerusalem in the fifth month (587BCE)” (Jer.1:3). Hence, Jeremiah was a prophet in Judah and Jerusalem for about 40 years. The long duration of his work was accompanied by astonishing events in the history of Israel, from the hopes of the reforms of Josiah to the fiery end of Jerusalem at the hands of the great warrior-king of Babylon, Nebuchadnezzar. It has been surmised that Jeremiah spoke sparingly during the first years of his prophecy, being in sympathy with the reforms of Josiah. But all that came to a dreadful end when the king was killed in battle, and brought back to Jerusalem on his shield, accompanied by the loud wailings and lamentations of his people. With the accession of Josiah’s son, Jehoiakim, Jeremiah apparently became far more active, since the son was little like his father when it came to social and religious reform. In subsequent weeks of texts from Jeremiah, we will witness the prophet’s reactions to the machinations both of Jehoiakim and Zedekiah. Suffice to say that Jeremiah is less than pleased about the actions of both of these monarchs.

Today’s text focuses on YHWH’s call, and a memorable one it is. “Before I shaped you in the womb I knew you; before you were born I consecrated you—I appointed you a prophet to the nations” (Jer.1:5). This call narrative is surely one shaped well after the fact, and whether or not Jeremiah had a hand in its shaping—a disciple might have written it—its content makes it crystal clear that Jeremiah was destined from the foundation of the world to be a prophet for YHWH. Little wonder that St. Paul borrows this language about his own call, describing it as occurring before he was born. Jeremiah in an immediate response to God’s call, demurs, offering up a familiar excuse to reject the call of his God. “O YHWH God, I surely do not know how to speak, since I am only a youth” (Jer.1:6). Like Moses before him, a Moses that Jeremiah had heard much of in his priest-dominated hometown, Jeremiah begs God to choose someone else, precisely because he has a problem speaking, the very thing he is being called to do. Moses claimed that he was “slow of speech and tongue,” leading some to imagine some sort of speech impediment, hence the myth that Moses stuttered. Hardly! He was desperate to get out of returning to pharaoh, as his five increasingly lame excuses make clear, ending with “choose somebody (anybody) else.” Subsequent eloquent speeches from the lips of Moses make it plain that his so-called stutter was a fabrication and excuse to avoid the work of YHWH. Like his forebear, Jeremiah says he is just too young, making powerful prophetic speech impossible.

But YHWH will have none of that! “Do not say, ‘I am only a youth,’ for you will go to all I send you, and you will speak whatever I command.” YHWH will brook no argument with the call, and provides no consolation to the reluctant Jeremiah. You will go, says God, and you will speak what I tell you to speak! “Do not fear them, for I am with you to deliver you,” says YHWH. In subsequent chapters of Jeremiah’s deeply troubled life, he will over and again question whether God is really with him since he so often feels so profoundly alone.

YHWH concludes the call by summarizing what Jeremiah is to do: “Watch! Today, I appoint you over nations and kingdoms to pluck up and to pull down, to destroy and overthrow, to build and to plant” (Jer.1:10). It is a harrowing call! 2/3 of what Jeremiah is to do involves pulling down and overthrowing, while only 1/3, and that after the destructive bit, is to involve building and planting. It will be no surprise that few listen to Jeremiah, fewer still become his disciples, and he spends his life in struggle and loneliness, without a wife or family, with many screaming that he is a traitor to Judah and an outcast to his people. In the very midst of his prophetic work, Jeremiah will accuse YHWH of assaulting him, in effect raping him, forcing him to preach words that make him anathema to any who listen (Jer.20). It is a call to ministry that is destined to make the one called nothing less than a gadfly, a veritable monster to be avoided and denied by those to whom he has been sent. It is, in short, a terrible call to work for YHWH. But so it often is. This ministry of the gospel is hard work, and if you are not ruffling more than a few feathers along the way of doing it, it may be that you are not doing the ministry to which God called you at all.