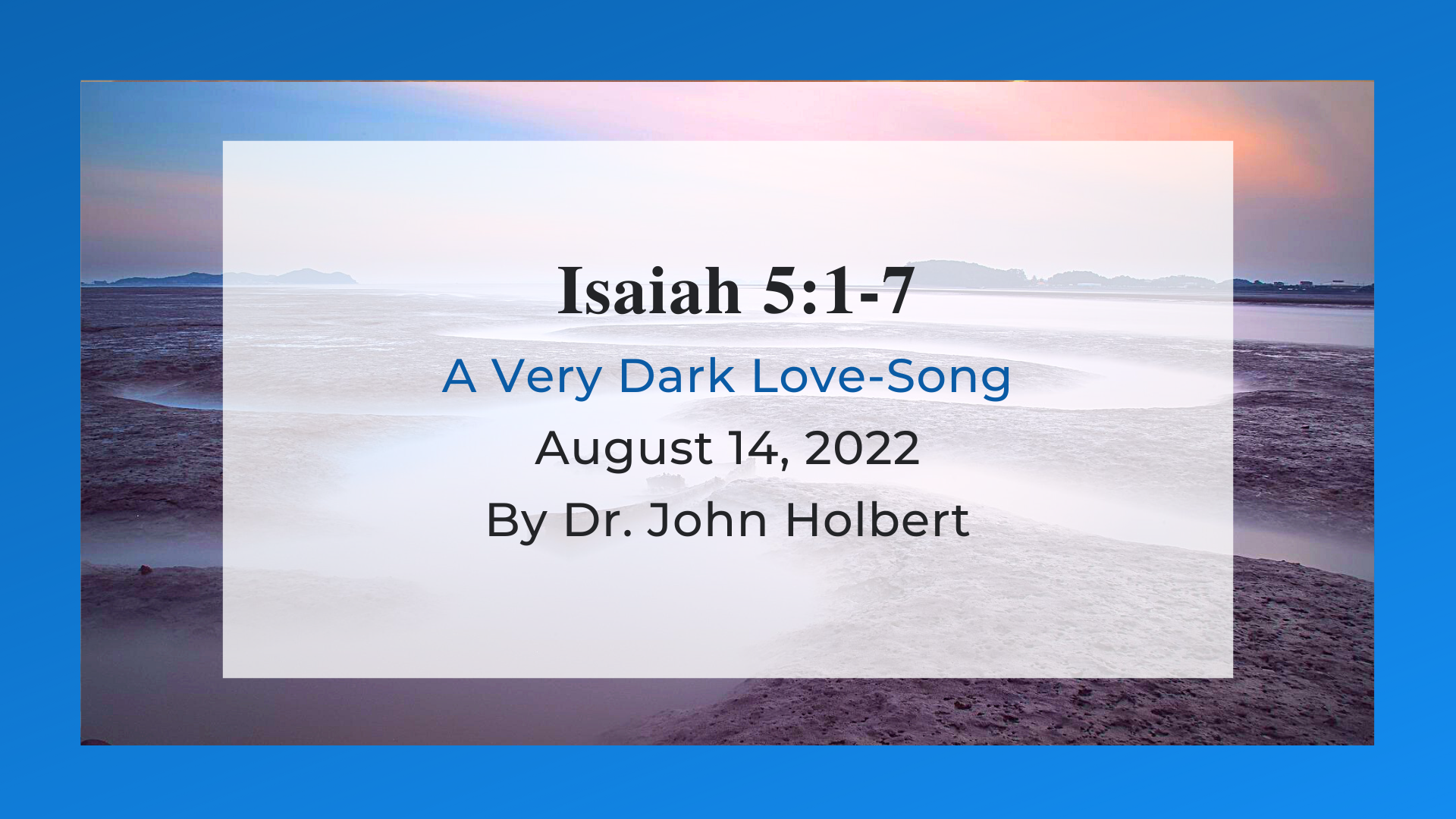 The Bible is replete with all manner of literary tropes: praise songs, laments, complaints, epic poems, dry legalities, even satires. The prophet Isaiah includes within its wildly diverse 66 chapters an example or two perhaps of all of these and more. I suggest that the short poem of Is.5 is one of the strangest love songs ever composed. Rather than a peaen to love and romance, though it appeard to employ that well-known form, it is instead an explicit and harsh assault on the recalcitrant and stubborn people of Israel. That people, signified here as a beloved vineyard, planted and cared for by YHWH, has become the object of scorn and hatred and rejection by that same God.

The poem begins as love songs of the day apparently did:

“Let me sing now for my beloved

The referent of the named figures here—“my beloved” and “his vineyard”—are a bit obscure. Obviously, the “me” is the singer of the song, presumably YHWH, who is lifting a tune on behalf of “his vineyard.” Thus, the vineyard is the beloved, and YHWH is wildly in love with it. However, the second line of vs.1 confuses the references somewhat:

“My beloved possesed a vineyard

Now the beloved, presumably Israel, owns a vineyard, rather than is a vineyard. However, the confusion might be cleared up if we assume that the “beloved” of the verse is not in fact Israel but instead is YHWH, thus rendering the singer as God who is singing on behalf of the beloved, that is YHWH Godself. Hence, the “his” of 5:1b is YHWH, and the vineyard is Israel. Thus, the actions in the succeeding verses of the song are taken by YHWH.

“He (YHWH) dug it, cleared the stones,

and planted it with vines;

God built a tower in the middle,

and cut out a vat in it,

Now the problem presents itself. The vineyard Israel, planted and nurtured by YHWH, instead of yielding the expected harvest of fine grapes produces grapes that smell. The stench of the grapes from this foul vineyard are in sharp contrast to the wonderful smells and tastes of a typical vineyard. Clearly, something is dreadfully amiss in this supposed vineyard of YHWH. As a result of the foul-smelling grapes, God sets up a judging match to be performed by “the people of Judah, the dwellers in Jerusalem” themselves. “Judge between me and my vineyard,” demands YHWH (Is.5:3). After all, “what more can be done for my vineyard that I have not already done” (Is.5:4a)? “When I anticipated fine grapes, I got smelly ones instead” (Is.5:4b)!

But YHWH does not wait for the Judeans to offer any answer to the judging between YHWH and the vineyard, but proceeds to tell them what is about to happen:

“I will remove its hedge, so that it will be devoured;

I will breach its wall so that it will be trampled down.

I will make it a disaster,

not pruned or hoed;

briars and thorns will spring up,

YHWH determines to destroy the beloved vineyard by removing its protective hedge, crushing its guardian wall, allowing it to fall into complete neglect, so that thistles may control the once fertile hill, now reduced to a dry and desiccated piece of forgotten soil. The vineyard Israel will be no more! Why? The final verse, in unforgettable puns, announces the reason.

“Surely, the vineyard of YHWH of the armies is the house of Israel,

righteousness—but look! Cries of anguish! (Is. 5:7)

The Hebrew here is delightful. Instead of mishpat, God received mispach; instead of zedakah, God received zeaqah. The two words God expected—justice and righteousness—are two of the most commonly used words in Israelite prophetic literature, words that encompass what YHWH requires of the chosen people, namely equity among them, concern for the poor and marginalized, the search for community for all people. But instead in this failed vineyard God experienced only cruel bloodshed and cries of furious anger and rage.

Isaiah 5 is a poetic summary of the horrors of Judean injustice, the monstrousness of Jerusalem’s denial of righteous behavior. YHWH is furious and is intent on tearing the people apart, of treating them like Sodom and Gomorrah (Is.1:9), obliterating them from the earth. This is a dark love song indeed, and the remainder of Isaiah’s long prophecy will consist of permutations on this theme of God’s fury as well as hopes for God’s relenting and ongoing love for the evil people. In short, the prophecy of Isaiah is little less than a mirror of God’s anger against the chosen people, along with God’s unbreakable hope for them at the same time. But here in Is.5 we hear a bleak and anguished song announcing the end of God’s Israel, the failed and appalling vineyard.