A Strange Origin of Greatness - Reflections on 1 Samuel 1:4-20 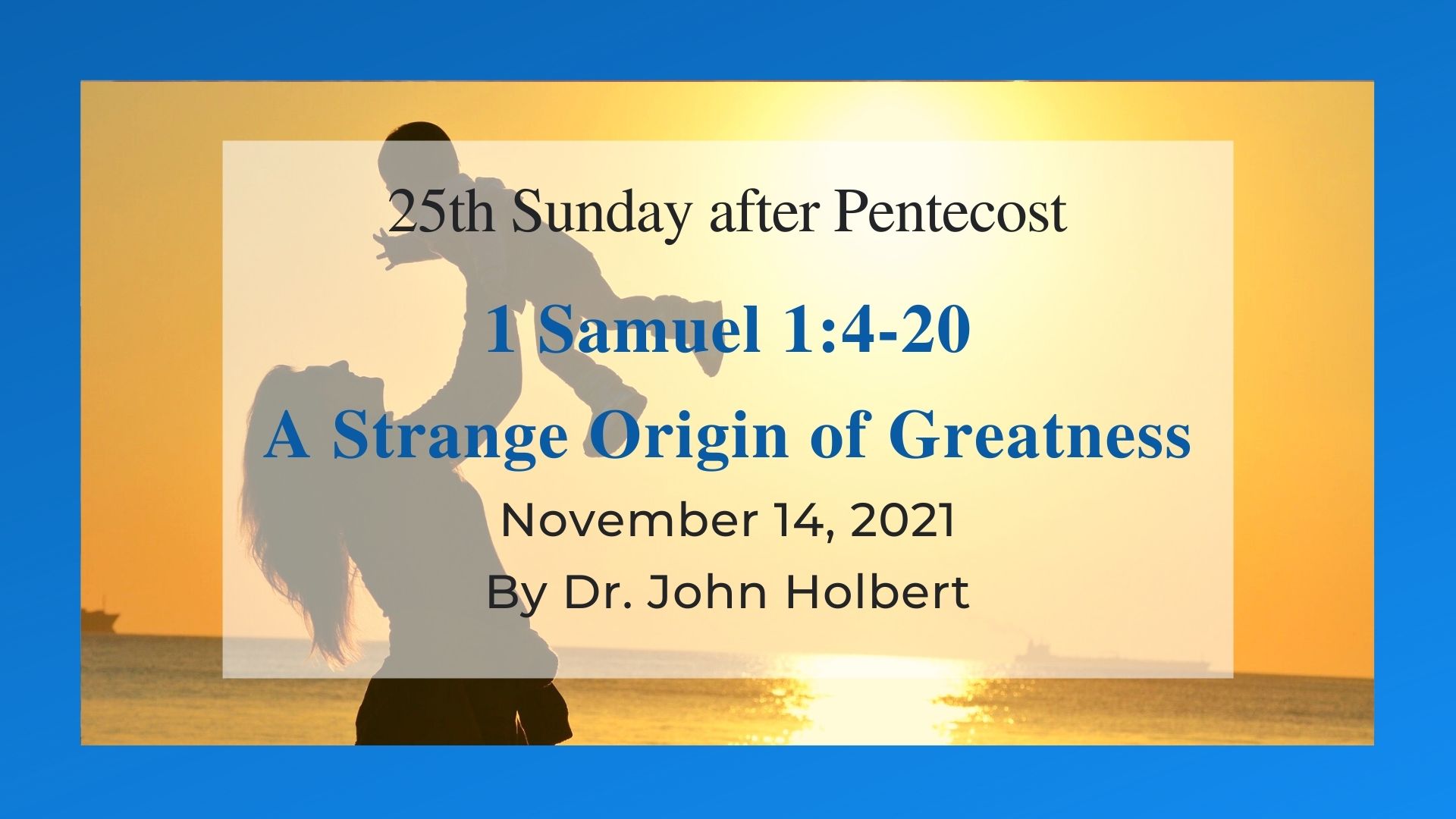 A Strange Origin of Greatness -Reflections on 1 Samuel 1:4-20

The earlier listing of post-Pentecost texts from the Hebrew Bible in Year B of the lectionary gave to us a healthy portion of the magnificent story of Samuel, Saul, and David. One could, of course, preach from these texts alone during several lifetimes of proclamation, but the tales are far too expansive and at the same time far too detailed to allow much more than specific deep dives into the wells of their wonders. This is true concerning today’s text from the very beginning of the rich saga in 1 Samuel 1. We should note something immediately: this vast narrative, encompassing a near full century of events, presented in 57 amazing chapters, begins with a tiny tale of family strife and female triumph. Its major focus is on Hannah, Samuel the prophet’s courageous mother, who is portrayed to us as nothing short of a powerhouse. But her life hardly starts that way.

Her picture is first one of defeat and husbandly indifference. The problem is that she is but one of two wives of the man, Elkanah; her co-wife is Peninnah who is richly productive in the way that all ancient world women were expected to be. She had numerous children, and Hannah was apparently incapable of having a child at all. We moderns can hardly understand what an enormous liability this childlessness would be for a woman in the tiny community of emerging Israel. Large families were crucial, given that infant mortality must have been high, and many children were always needed to work the family farm and help manage the livestock. Keeping a woman in tow who could produce no children was a distinct dilemma. Still, Elkanah seemed somehow devoted, in his own way, to his empty-wombed second wife, during sacrificial trips to the shrine giving her a “double portion” (if that is the meaning of the difficult Hebrew in vs.5) of the sacrificial meat, “because he loved her.”

However, Peninnah bore no love for her rival wife, but “provoked her severely to irritate her” (1 Sam.1:6). One can only imagine the taunts hurled Hannah’s way: “flat belly,” “empty womb,” “useless wench,” and others too awful to recount. Finally, Hannah, after years of this monstrous assault, “wept and would not eat” (1 Sam.1:7). Elkanah, in an obviously patriarchal way to comfort her, said, “Hannah, why are you weeping? Why don’t you eat? Why is your heart so sad? Am I not more to your than ten sons” (1 Sam.1:8)? “Frankly, my dear,” we might imagine Hannah saying to herself, “No, you are not more to me than one son, let alone ten!”

But, despite Hannah’s predicament, and her ongoing fruitlessness, the entire family again made its annual trip to sacred Shiloh, where Eli was high priest. Eli, who is later described as a very fat man, and none too aware of his priestly duties along with being a decidedly poor father to his wastrel sons, was seen to be “sitting on the seat beside the doorpost of YHWH’s temple” (1 Sam.1:9). Hannah passed by the old man on her way into the temple to pray out of her increasing distress at her continued circumstance. “O YHWH of the armies,” she prayed, “if only you will look on the misery of your servant and remember me, and not forget your servant, but will give to your servant a male child, I will bring him to you a Nazirite until the day of his death. He shall drink no wine or intoxicants, while no razor shall touch his head” (1 Sam.1:11). This is a large vow indeed. The nazarite vow was often uttered as a vow for a year or two, but to claim that a future son would be like this for an entire life—no wine, no grapes, no involvement with dead bodies, no haircuts—would doom any man to a lifetime of peculiarity and possible estrangement from society. But Hannah’s desperation has led her to this terrible and expansive vow.

All this Hannah spoke silently, while Eli was watching her mouth move from the comfort of his seat near the temple entrance. But the old priest, apparently incapable of discerning a fervent prayer from a drunken rant, shouts at Hannah to “put away her wine” (1 Sam.1:14). Hannah calmly retorts to the apoplectic old priest that she is hardly drunk, but, accusing him by implication that his assessment of her is false and insulting, says, “Do not think of me as some worthless woman; I have been speaking out of deep anxiety and vexation all this time” (1 Sam.1:16). But instead of asking her, in solemn priestly fashion, just what the source of her “anxiety and vexation” might be, Eli merely says, “Go in peace, and may the God of Israel grant your petition” (1 Sam.1:17). It is little more than a stock answer, a kind of rote reply that ignorant religious leaders have too often given to distressed seekers.

Despite that horrifying example of poor pastoral care, Hannah’s prayer was answered by YHWH, and she was suddenly pregnant after a satisfying sexual bout with Elkanah. After nine months, she produced a male child, and she named him, herself, Samuel, because she said, “I have asked him of YHWH.” And though Elkanah once again prepares to head to Shiloh with his whole family, Hannah refused to go this time, saying that she would accompany him and Peninnah’s large brood only after “the child is weaned,” after which time she will present him to the temple forever as a nazarite, as she had vowed to do.

There is one more oddity in the tale. Hannah names her son Samuel, claiming she “asked him from YHWH,” but in fact the name “Samuel” has nothing to do with asking. It plainly means “God has heard/listened.” The fact is that the name of Saul, who will be Samuel’s continual antagonist in the story to follow, is based on Hebrew “to ask.” It is difficult to know what we are to make of this peculiar naming, but perhaps we are to be aware of the struggle this child Samuel will have with the still unborn Saul, first king of Israel, and Samuel’s choice as king, as well as Samuel’s later rejection as king. In any case, from this familial narrative of jealousy and the struggle for acceptance and recognition arises the vast narrative that will occupy so much of the Bible’s story of the rise of Israel as a nation. It should be noted that all of the great Bible narratives, from the tales of Genesis to the potent story of the Exodus to the story of Jesus begin with small tales of family. We ought never discount the power of the small family story to offer the origins of the larger narratives that occupy so much of our attention in the course of our sacred history; they are always worth a further look.