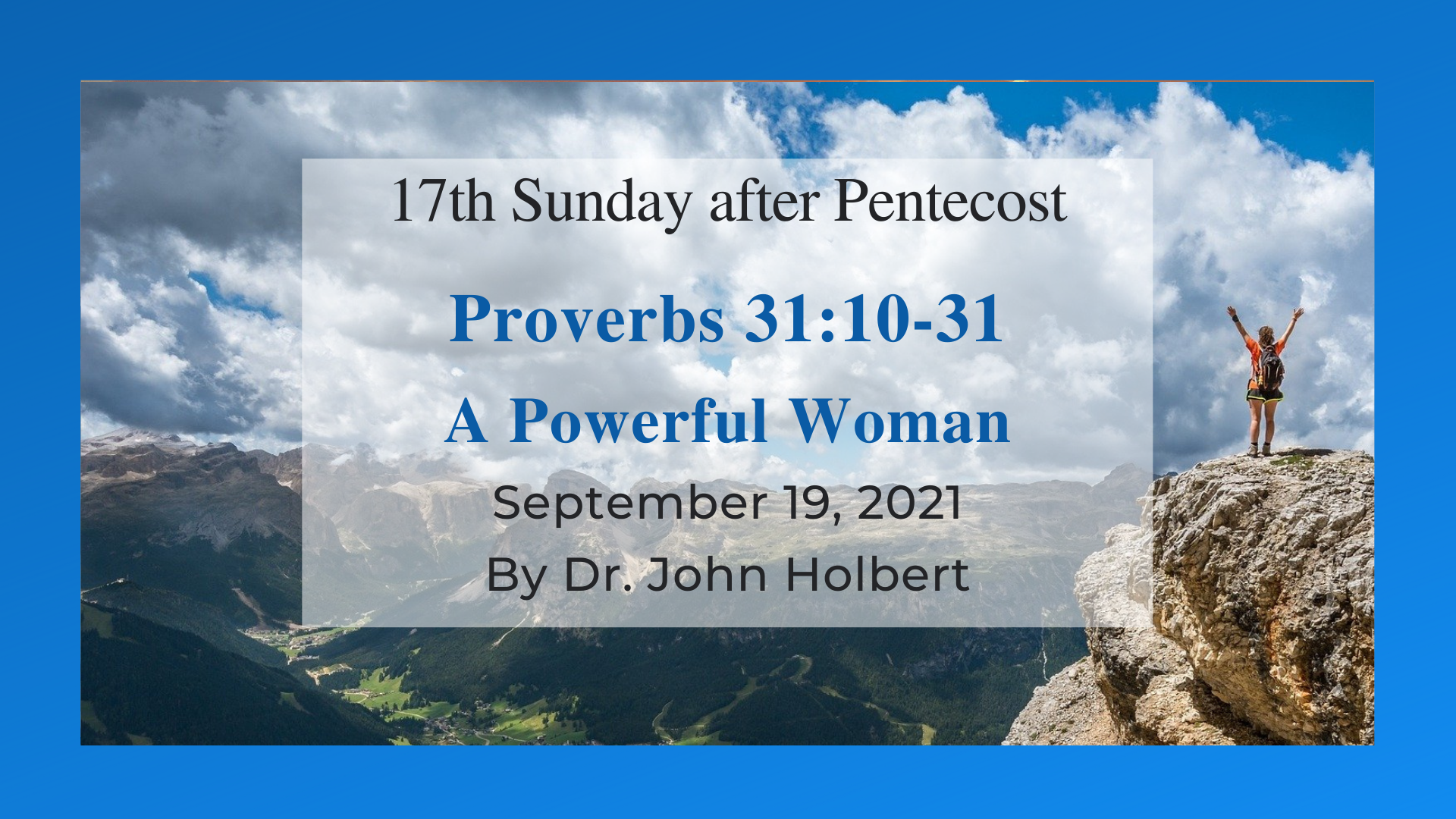 We conclude our brief look at the long book of Proverbs with its concluding account of an extraordinary woman. Last week we examined the figure of Woman Wisdom, that female character who is said to stand continually, calling for all persons to heed her song of wisdom, urging them to turn away from foolishness and doltishness and embrace the wisdom of right behavior and correct thinking for the betterment of society. Nearly all other materials from the book of Proverbs has to do with instructions given by male mentors to young men, but at the very end, the collectors of the book provide us with a portrait of a truly powerful and worthy woman, a wife, mother, provider, a hard-working and clever pillar of the community, praised by her husband and recognized by all as the very epitome of what it means to be a strong and capable woman in Israel, according to this branch of the school of wisdom. In short, this paragon has heeded the call of her counterpart, Woman Wisdom, and thus provides for us a female bookend for the lessons of the whole book.

We should note that the poem comprising Prov.31:10-31is an acrostic, that is, the first letter of each succeeding verse begins with a letter of the Hebrew alphabet in order; all 22 letters are to be found in the poem. Vs.10 begins with the first letter, aleph, and the following verses begin with the next letter in turn all the way until the final letter tau begins verse 31. Obviously, such a patterned text lends itself to easier memorization, a fact that suggests that Prov.31:10-31 was written to be shared and spoken by many readers and speakers. That means that its contents were intended for the widest possible distribution; all should know of the fabulous portrait of this exemplary woman, and all women should strive to emulate her in every way that they can. Once we appropriate her picture, such emulation will be seen as a very tall order. This woman is nothing less than astonishing in the breadth of her wisdom, the energy of her labor, and the tireless way that she conducts her amazing life. I must say that I doubt any woman actually wrote this piece, for it sounds like the woman that every man wishes he had! After all, her exhausting work ethic allows her husband to be “known in the city gates,” that is in the place of legal and important decision-making, who takes his “seat among the elders of the land” (Prov.31:23). And though he is said to praise her unreservedly— “Many daughters have done worthy things, but you—you surpass them all” (Prov.31:29)—the only actual activity that the husband is said to do is “sit at the city gate” and “praise his wife.” Good for him, but such “actions” pale when compared to the nearly constant whirlwind of activity described for the woman. This man is fully reminiscent of that dreamy Tevye, in “Fiddler on the Roof” who imagined himself as a rich man spending his days with the rabbis, contemplating Torah in the synagogue while his wife Golda, was at home slaving away.

Indeed, the family in the poem is obviously a grand one, with servants to perform some of the menial work (31:15), with access to fine cloth, creating sumptuous garments of crimson for those cold days (31:21), even making for herself clothes of “fine linen and purple,” employing the rare and expensive purple dyes, available only from specific mollusks from the Mediterranean Sea. And not only does she weave all these fine garments, she also sells them (31:24), supplying “merchants with sashes” (31:24). Not only does she buy and sell clothes, she also purchases land and from the proceeds of her shrewd purchase, turns around and plants a vineyard, a cash-producing crop. This woman is a businessperson of importance and trustworthiness. The last line of the poem makes it plain that she must not only be praised in words by her husband and by the community for her exemplary actions but in addition, it is stated in command form: “Give her a share in the fruit of her hands and let her works praise her in the city gates” (Prov.31:31). In other words, the worthy woman must realize a profit of her own from her labor, a labor that is fully worthy of unlimited praise from the very cultural center of the city, its gates.

The very first words of the poem announce the quality of this woman. She is named in 31:10 ‘asheth chayil, a woman vigorous, powerful, worthy, and substantial. Another woman of the Hebrew Bible is so named, Ruth, that powerhouse Moabite whose amazing life mirrors closely this Proverbs woman. Ruth left her homeland to follow her grieving mother-in-law, Naomi, back to the land of Israel after her ten years in Moab that witnessed the death of her husband along with the deaths of her two Moabite sons-in-law. Ruth’s loss of husband, of course, makes her trip back to Israel especially dangerous, because she is woman, widow, and foreigner all in one. Nevertheless, she not only gives her life for Naomi, she also risks her reputation with a man she hardly knows, Boaz, first in his fields filled with lusty workers, and then on the threshing floor with this strange man. As a result of all these risks, Ruth triumphs, demanding marriage to Boaz and giving birth to a son who becomes an ancestor of Israel’s greatest king, David. Proverbs woman is that sort of woman exemplified by Ruth.

It remains obvious to me that a man wrote this poem. This woman is a dream figure for a wealthy, connected man, who desires a very competent partner, and a tireless worker who can enable the rapid social ascendancy of her husband into the highest ranks of city society. At the same time, however, this woman works for her own ascendancy, and receives her own rewards, both verbal and material, as she acts as co-worker with her husband. All in all, the picture seems rather enlightened for a decidedly patriarchal culture, but I would not imagine that we find here what might be termed a feminist portrait, though some readers have tried to make it so. I remain glad, nonetheless, that the writers of Proverbs chose to end their work in this unique way. The portrait of the Worthy Woman is well worth our modern contemplation.