A Panel of Three: The Ascension of Jesus 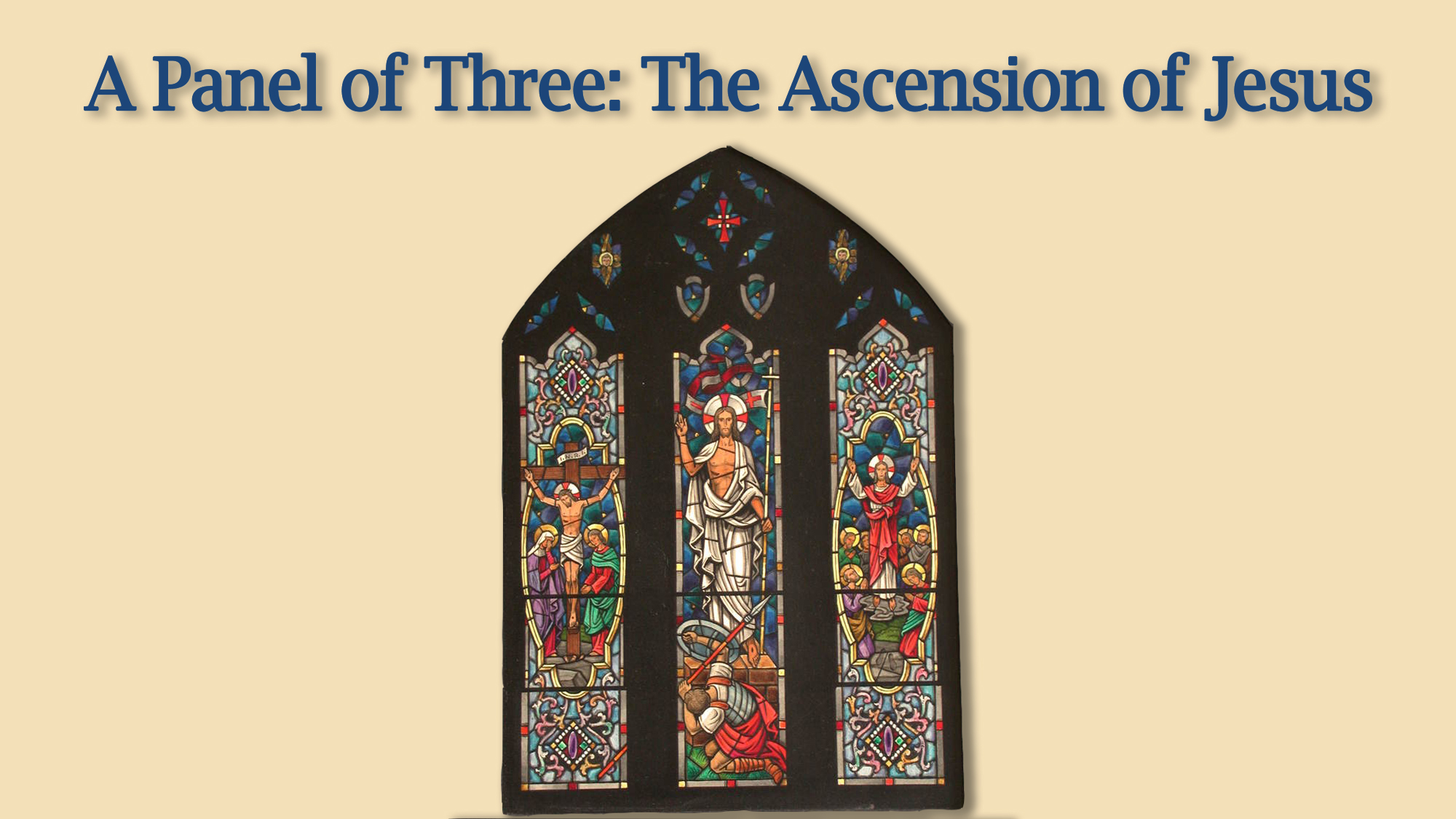 A Panel of Three: The Ascension of Jesus

When I was a child the stained glass window on the back wall of the church we attended was in the form of a triptych, a work of art in three panels, that, taken together, told a story. The name triptych originates from the Greek tri (3) plus ptche (fold). The left hand panel was Jesus in Gethsemane his face earnest as he prayed with a blood red tear glittering on his face. The right hand panel was Jesus on the cross, his face anguished. And the middle panel was Jesus ascending, his face serene, and his feet on a cloud that was at least a foot off the ground. “Why can’t that peaceful man help those other two men?” I asked my mother.  Her answer, “Honey, they’re all the same man.” Well, that really cleared things up for a four year old!”

Like that stained glass triptych, the Ascension in Luke’s account highlights three panels that all depict stages in the story of the same Savior.

Mary recognizes Jesus in the “gardener” only after he calls her by name (John 20:16).

The disciples on the road to Emmaus recognize Jesus in the “vagabond” only when he breaks bread and blesses it (Luke 24:30).

The disciples in the scene in Luke 24:36-49 recognize Jesus in the “ghost” only when he shows his scars and eats a piece of fish.

Then, the disciples experience a mix of emotions.  They were, “in their joy disbelieving  ... still wondering” (24:41).

When they recognize him they are recognizing that he is, not a gardener, vagabond, or ghost, but The Son of Man, the suffering servant and the Messiah.

As Son of Man he is able to identify with our human struggles and be a sort of representative human. At the same time, he wins a victory over forces that oppose God’s work in the world.

As Messiah, Jesus brings in a reign of God. It is a reign, that, contrary to popular expectations, is not reducible to political power and nationalistic ambitions. It is a reign that results in a community of righteousness and peace.

Here on the brink of his departure it dawns on the disciples who it is who stands before them.  Jesus who was servant is Savior. Jesus who was jeered at is the judge of the living and the dead. Jesus who was mocked and mutilated is Risen Christ, Messiah.

Jesus now appoints the disciples as his witnesses, not only to his death but to his resurrection. They are to spread the good news of repentance and forgiveness of sins, to all the nations, beginning with Jerusalem (Luke 24:47).

Luke intends for us to see parallels to the great prophets Moses and Elijah whom Jesus both follows and surpasses (See Luke’s account of the Transfiguration, especially 9:31). Jesus completes the “departure” or “exodus” of his suffering, death and resurrection by being carried up into heaven (2 Kings 2:1-18). Like Elijah he blessed those who stay behind and arranges for them to receive a measure of his Spirit (2 Kings 2:9) (Byrne 192-3).

We might expect the disciples to be mournful at his departure. But instead, Luke they return to Jerusalem “with great joy, remaining continually in the Temple blessing God” (24:52-53).

I’m always impressed by people who can face endings and departures with equanimity, discerning the hope amid their sadness. My dad lay dying of liver cancer in his study at my parents’ home that afternoon in November of 2002, and I sat in the kitchen staring into a cup of cold coffee. My niece though, was a different story. Ava was then 5.  She had hovered near grandpa’s bed earlier that day, patting his hand as the hospice worker came to check on him. That afternoon the doorbell began to ring as visitors came to pay their respects to my dignified, dying dad. My mother wasn’t sure how to handle this. Not sure that friends would want to visit a deathbed. Maybe they’d prefer to stay in the living room and just verbally express their care and concern. She was showing one couple into the living room, when Ava came up and took the man by the hand. “Want to come say goodbye to my Grandpa? He’s leaving soon.” She led them back to his bedside where they were able to share a brief, heartfelt farewell. From then on, Ava became the doorkeeper and hostess. She was the best qualified for the job that day.  Because she got that this moment was important and that it wasn’t all sad.

Luke reminds me of Ava in his portrayal of Jesus’ departure. He has shown us the joy that came when the disciples recognized Jesus (24:41). He has shown us Jesus’ assurance to his friends that, though he is leaving, they will never be without him. Why would they not want to savor this moment, while tasting the salt of their tears? What is there to keep joy from overcoming their sorrow? What is to keep them from returning to Jerusalem with great joy and praising God in the temple?