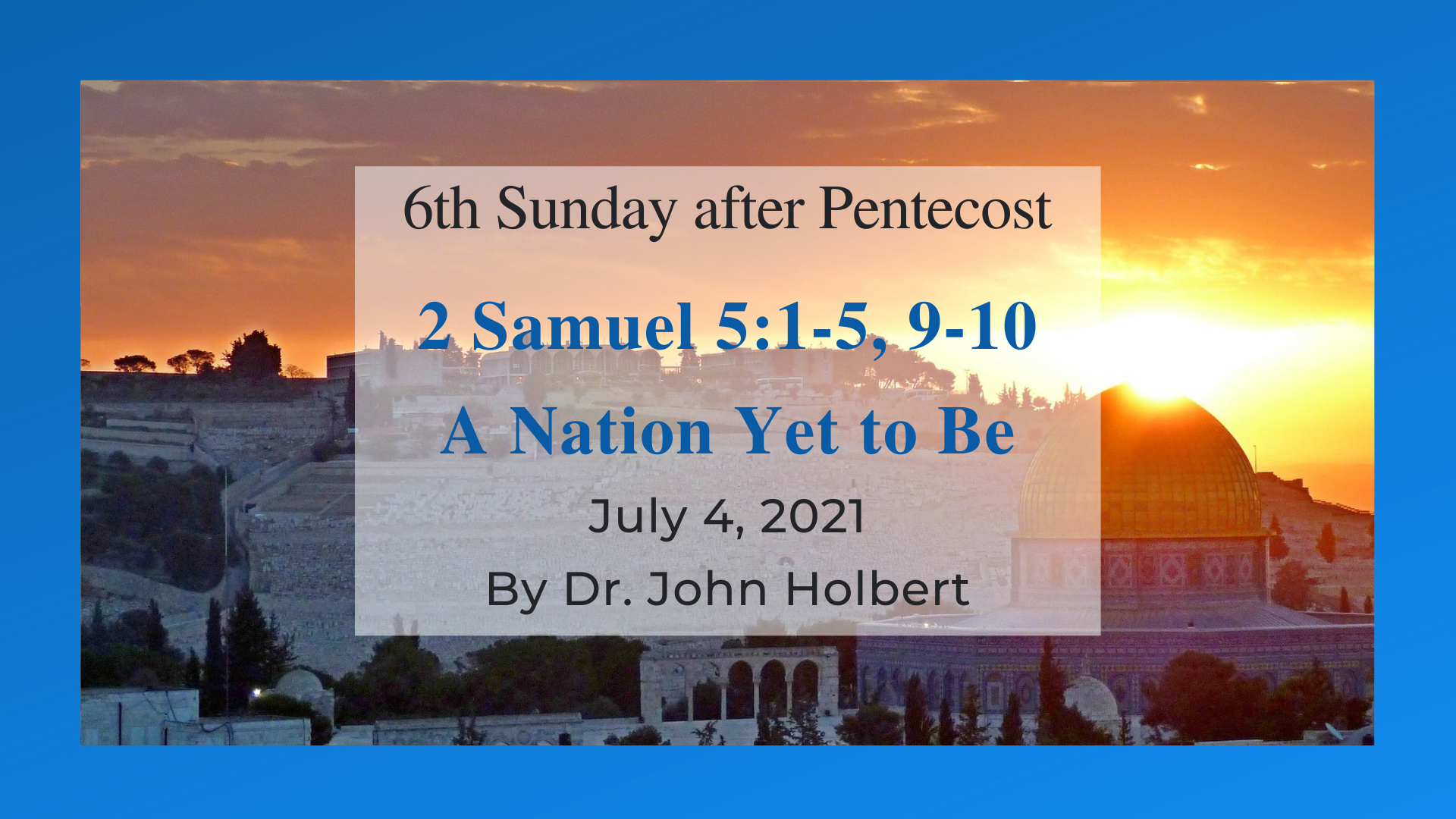 This text is an exceedingly odd choice for many reasons, but the main one is its extreme difficulty in knowing precisely what is going on in the story of David’s capture of Jerusalem. And this year the text falls right on July 4, Independence Day in US America, a day that has become a hallowed celebration of patriotism with frolic, fireworks, and folderol of all sorts. I have been in more than a few sanctuaries festooned with flags, surrounding parishioners in all manner of uniforms, the assembly not altogether clear just whom they have come to worship. Today’s 2021 tale of David recounts the king’s capture of his capital city in a decidedly peculiar and mysterious, if not foully underhanded, way. Let us see what we can make of a very difficult text and attempt to imagine what it may say to us about July 4th..

David and his soldiers choose Jerusalem as a new capital for three good reasons; it is near the center of the emerging land, David’s desired combination of Saul’s older northern lands and David’s southern territory; it has no ancient connection to either Saul or David, being the provenance of the Jebusites for as long as anyone can remember; and it is easily defensible, being ringed on three sides by steep mountains, while the fourth side offers a clear and easily guarded sight of the city. In short, it is well-nigh perfect, and David determines to have it. As the army approaches the city, they are met by either the Jebusite elders of the city or by a representative man of Jerusalem (the text is unclear) who tells David, “You shall not enter here unless you can remove the blind and the lame” (2 Sam.5:6). This sentence is what is known as a “crux” for scholars, which is a notoriously difficult phrase to translate and to understand. I am at least partly convinced by an explanation of the famous Israeli archaeologist, Yigael Yadin who, based his reading on an older Hittite text that he said describes a ceremony for the swearing in of troops where a blind woman and a lame man are placed in front of the new recruits and warned that if they do not fulfill their duty as soldiers, they will be cursed to be like these two unfortunates before them. This helps to understand why the text says that David “despised the blind and the lame,” whom the Jebusites stationed on the ramparts of Jerusalem by way of taunting the Israelites who would dare attack their city.

Another “crux” of the text is the meaning of the word tsinor in vs.8. If it means “conduit,” as is possible, then David is challenging his troops to shimmy their way up a kind of tunnel from below the high rock of the promontory of the city, and once they have reached the heart of the city, they are to remove all blind and lame as symbolic hurdles against an Israelite victory. In 1867 a tunnel known as Warren’s Shaft was discovered, feeding in from the Spring of Gihon and leading somewhere up to the city to the east. There is much uncertainty about that discovery, but it is a possible candidate to explain the shaft that appears to be mentioned in the story. The odd business of the blind and the lame may have another reference; Jonathan, Saul’s son killed on Mt. Gilboa, had a son who was lame, having been dropped as an infant by a frightened nurse, upon hearing of Saul and his sons’ deaths. When the text enjoins, “No blind man or lame one shall enter the house” (2 Sam.5:8), meaning perhaps David’s future palace, the aphorism implies that the lame grandson of Saul, who might someday claim the right of kingship, will never be welcome in David’s house. Even later in Israel, strict rules were developed concerning who could and could not enter the Sacred House, that is the Temple, the blind and lame being specifically excluded.

Whatever these obscure references may indicate, the fact is that David captured Jerusalem, made it his capital, renamed it “the city of David,” and immediately began building projects clearly intended to put his own stamp on the place (2 Sam.5:10). Just what might all this have to do with the US America 4th of July? It is not difficult to imagine that David’s brutal capture of Jerusalem, deposing the long-time masters of the city, removing the marginalized members of the community, the blind and lame, is not unlike the ways in which the history of our country has demonstrated a similar misuse of power against any who would dare stand in the way of “American progress” or “manifest destiny.” Our brutalities especially against Native Americans and African-Americans echo David’s abuse of the Jebusites in his unstoppable desire to claim Jerusalem for his own. Each time we come to celebrate July 4, a necessary part of that celebration is to remember the many ways that our forebears employed their power to take what they wanted, expunging the inhabitants of the land and abusing others to serve their economic needs. US America has always been a “ nation yet to be,” not a perfect union fully formed. Each wave of the flag and each pop and crackle of a firework contains within it the necessity, however unwelcome, of reminding ourselves that our country is more ideal than real, more on paper than in the world. We are right to love our country, as long as we know its fuller history, and as long as we recognize that we worship not our country, but the God who is over all countries, loving and challenging all of them, including our own, to seek to follow the ways of justice and righteousness.