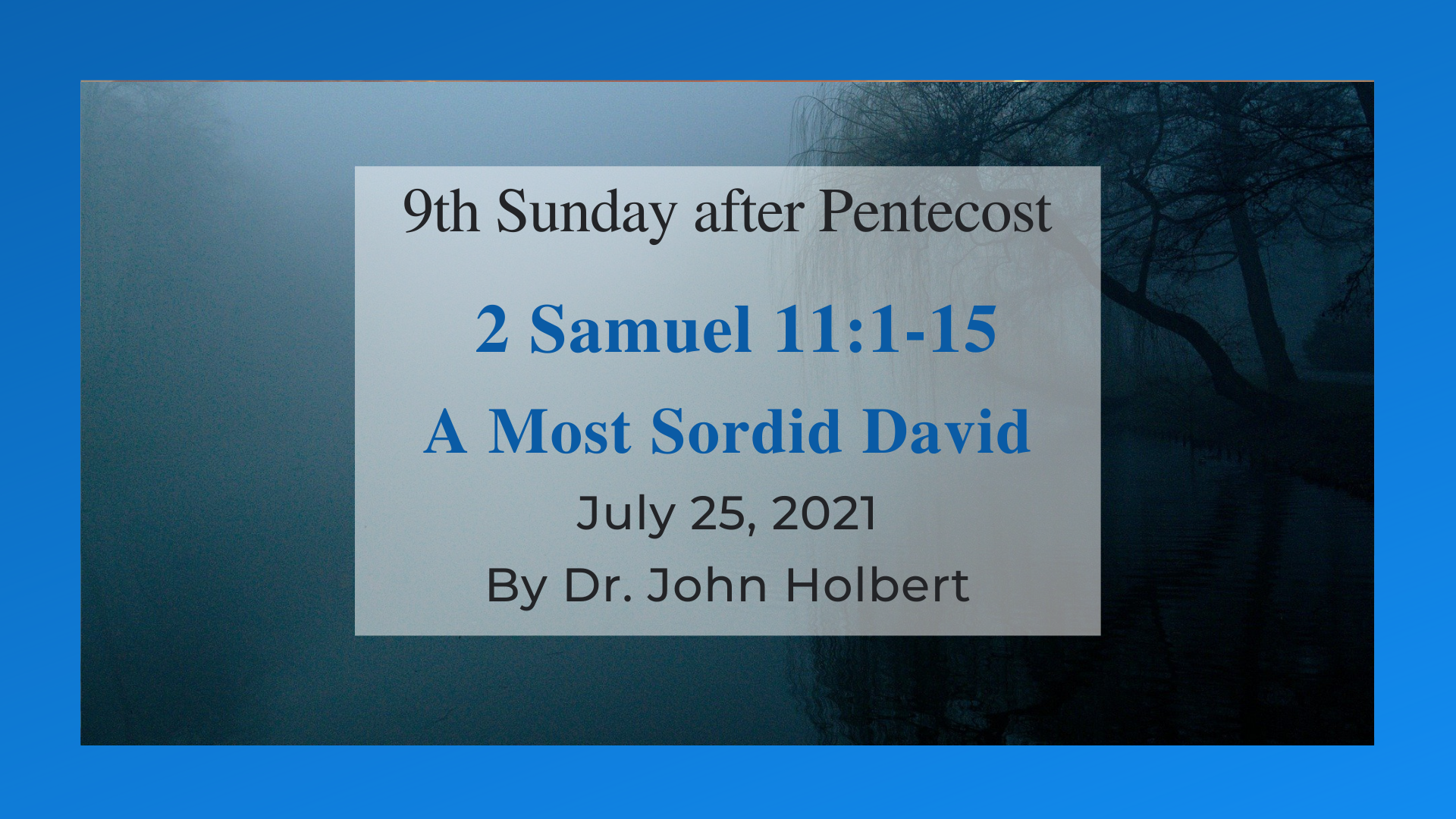 A Most Sordid David

Today we confront both one of the Bible’s most memorable and well-written stories as well as the most sordid tale of a significant biblical character one can conceive. David has ensconced himself as king over a united Israel, has defeated all immediate threats to his throne and nation, has created a huge family with numerous wives and children, and has enjoyed the almost universal acclaim of his people. The ark of the covenant has been placed in a sacred tent in Jerusalem, the new capitol city of the expanding empire, wrested from the formerly resident Jebusites. What could possibly go wrong? The tale describes the beginning of the appalling spiral of David’s descent from adored king to reviled adulterer and murderer, all in the shocking series of events that comprise this single chapter.

The story is so well known as not to need reiteration, yet the details of the sharply composed narrative arrests our attention each time we read it. The tale is set in the spring of the year, that dry season after the snows and rains of the winter have subsided, leaving flower-bedecked hillsides and delightful warm temperatures, leading to pleasant family outings, but also leading to renewed warfare, unencumbered with frost and mud, allowing free paths for tramping soldiers and rolling chariots. So, David sends Joab, his faithful general, to battle with the Ammonites to the northwest of the land and to besiege their capitol, Raboth-Ammon, a place that has now been the capitol of one country or another for over 4000 years. Ominously, we are told “David remained in Jerusalem” (2 Sam.11:1). Though it was clearly “the time when kings went forth to battle,” the king of Israel this time does not go. Why? No reason is provided. Is he bored? Is he tired of perpetual warfare, since his entire life has consisted of fighting and struggle? Why not take a rest from all that?

One lazy afternoon, David arises from his couch, after a pleasant afternoon nap, and his eye falls on a fabulous sight. He sees a woman at her bath, stark naked no doubt, and superbly alluring. Without a second thought, David asks a servant who this magnificent creature might be. The answer is definitive: “This is Bathsheba daughter of Eliam, wife of Uriah the Hittite” (2 Sam.11:3). In other words, the woman is well known, a respected daughter and the wife of one of David’s own mercenary warriors, the redoubtable Uriah. Instead of being a bit hesitant to act on the king’s obvious lust, we are told, “David sent messengers to get her, and she came to him, and he slept with her” (2 Sam.11:4). David acts in this shameful way though the woman is “purifying herself from her period” and is thus ritually unavailable to any man, let alone a man not her husband. Despite her period, a time normally safe for a woman, Bathsheba becomes pregnant, and tells the king as soon as she knows the fact (2 Sam.11:5).

And now David must decide. He has committed adultery—no one can deny that—yet he has many wives who have produced for him many children. What is one more? Why not simply announce the joyous event and get on with the royal life? After all, he is the king! The fact that the king acts as he does, knowing that he has done something dangerous and potentially debilitating to his kingship, reveals that this deed is something especially foul. His clumsy attempts to cover it all over suggests that the whole thing can be forgotten if handled carefully. He sends for Uriah, and the soldier comes at the command of his king. David tries and fails to get Uriah behind the same closed door with his wife, a fact that indicates what the plan is. Uriah refuses to do as David says, because he, unlike his master, is a man of some integrity, not wishing to find pleasure with Bathsheba while his men are fighting and dying in Amman. Finally David feels forced to find a way to have Uriah murdered, a filthy act performed by Joab. Uriah dies, along with any number of innocent Israelite soldiers to cover it up. However, David may think he is gotten off Scott free, but the troublesome prophet Nathan has other ideas.

What are we to do with David? He is presented here as little less than a Mafioso don, and even at his life’s sad and lonely end, that evil man appears again, demanding that his heir murder an old and helpless enemy (1 Kings 2:8-9). The genius of the authors of Israel is that they made certain that we all knew just what sort of man this great David was. Even though the Chronicler tried to clean all this up, making David out to be merely a singer and director of choirs and worship, and even though the psalms later attempted to make David out to be deeply contrite for his sins (see Ps.51 and its much later superscription), and even though in the New Testament Jesus is presented as David’s heir, the one who will finally bring justice and peace to the earth, ancient Israel refused to avoid the terrible truths about the man. We can know very little about David from history; there is only one contested piece of evidence from a 9th century BCE document that even mentions such a name. But the literary power of his portrayal is for all time. In this way we may never romanticize David, making him into some sort of behavioral model. This David of 2 Samuel is the one we know all too well, the one that sins mightily and never finally cleans up his monstrous act. In that way, perhaps he is more like us than we care to admit. But also perhaps like us, God can make something of him nonetheless.