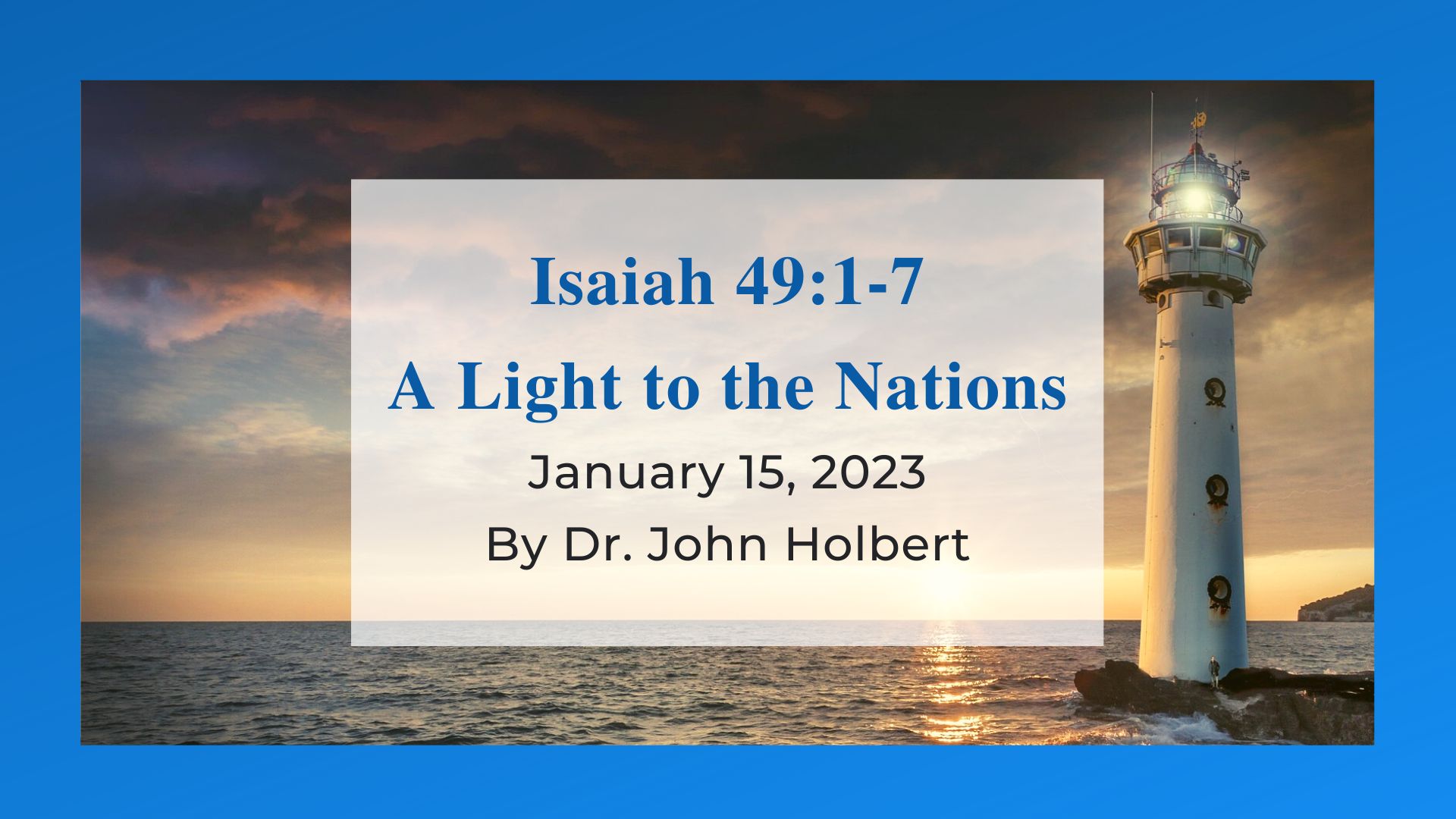 A Light to the Nations

We discussed last week, Jan.8, the traditional Baptism of the Lord Sunday, the first of the servant songs of Isaiah, found in Is.42. The focus of that text was on the servant’s unrelenting search for justice, a search that would not be eclipsed by the servant’s weariness or his public rejection. We noted that Isaiah offered there no identification for the servant, and as a result of that, the text was very early used as an indication that Jesus of Nazareth, the babe at Bethlehem, was in fact that servant. Is he, the early Christians claimed, who would without violence or surrender bring justice to a world in desperate need. On this second Sunday after the Epiphany, after the coming of this Jesus, Isaiah decides to suggest just who this servant is for his 6th century BCE community.

Is.49:3 makes it plain or apparently makes it plain. “God said to me, ‘You are my servant, Israel, in whom I will be honored.” Thus, Israel is the servant, says Isaiah. However, just what does he mean by that designation? It hardly could be the entire nation, a nation that has just been annihilated by the Babylonian armies, with the nation’s leaders carted off to Babylon, and the city of Jerusalem left a smoking ruin, its temple, and palace reduced to rubble. Perhaps then he means a remnant of that former nation of Israel, a sort of rump state, now residing in the capital city of the empire of Babylon? If so, then just who are the leaders who can play the role of a servant? Surely it cannot be the blinded Zedekiah, who has witnessed the slaughter of his own children along with the obliteration of all he has known as king? If not, then who?

And there is another problem. In several Hebrew manuscripts of Is.49:3, the name “Israel” does not occur, making the reference somewhat suspect. After all, in none of the other three servant songs does Isaiah refer to “Israel,” or anything or anyone else as the mysterious servant. Yet, just as we found in the discussion of Is.42, the identity of the servant is finally not nearly as significant as what the servant is asked by God to do. Vs.3 says clearly that the servant has been chosen by God in order that God may be honored. But, quite surprisingly, this unnamed servant is not only reluctant to take up the task but reminds God of how hopeless any task at all seems to be.

Is.49:4: “I have worked in vain; for nothing and empty wind I have poured out my strength.” In other words, says the servant, “I am tired of whatever it is you want from me, and all of my efforts have been finally useless.” In short, echoing the reluctant Moses at the bush, he says in effect, “Choose somebody else!” The NRSV’s translation of the second part of vs.4 may be a bit too traditionally pious. They read the first adverb as “yet,” implying that the servant remains convinced that God is with him still. However, if that word is read “supposedly” or “I thought,” it might imply that the servant’s trust in God is wavering in the face of the hard work God has demanded. Thus, one could read, “Is my justice (my right) really with YHWH, my reward truly with my God?” The servant then is not merely reluctant to act on behalf of YHWH, but is not altogether sure that YHWH has chosen rightly!

But instead of supporting the chosen servant with words to strengthen and assist the wavering one, YHWH makes the work vastly more difficult! The initial task was to “bring Jacob back to God, to gather Israel together again into God’s community” (Is.49:5). All well and good, says God, but all that is only a “trivial thing,” using a word in vs.6 that implies something slight, tiny, too small. And now, in nothing less than a huge divine demand, YHWH ups the ante of the servant’s needed work: “I will create you as a light to the nations in order that my work of saving may reach to the end of the earth” (Is.49:6). Here is nothing less than the ultimate statement of God’s desire for the whole creation. All, everywhere, must know and receive the salvation of God, and the servant will be the one to announce and offer it to everyone, everywhere.

In that sentence, of course, we find the core demand of the Gospel of Jesus Christ, as delineated at the end of the Gospel of Matthew, the great commission that calls for all to hear the word of salvation as carried by the resurrected Christ and his disciples. This brief essay is hardly the place for a discussion of the complexities and the dangerous, sometimes disastrous, results of the overly literal way that commission has been heard and employed. But that is the role of the servant according to Isaiah, and that role was shifted to Jesus and his disciples by the earliest Christian communities since Jesus was identified as Isaiah’s servant by those who read the words of the prophet. I would add that the call of the servant to announce justice, as Is.42 emphasized, is the key to the work of the servant, and Is.49 extends that call to the entire world. God’s call for any true servant is to live the life of justice and to demand that justice for all people.

The final two servant songs of Isaiah will not appear until Sundays leading to Easter, while the season of Epiphany will turn to the certainty of God’s presence, through the servant, continuing the joyous search for justice for all, as Is.9 next Sunday will make plain.