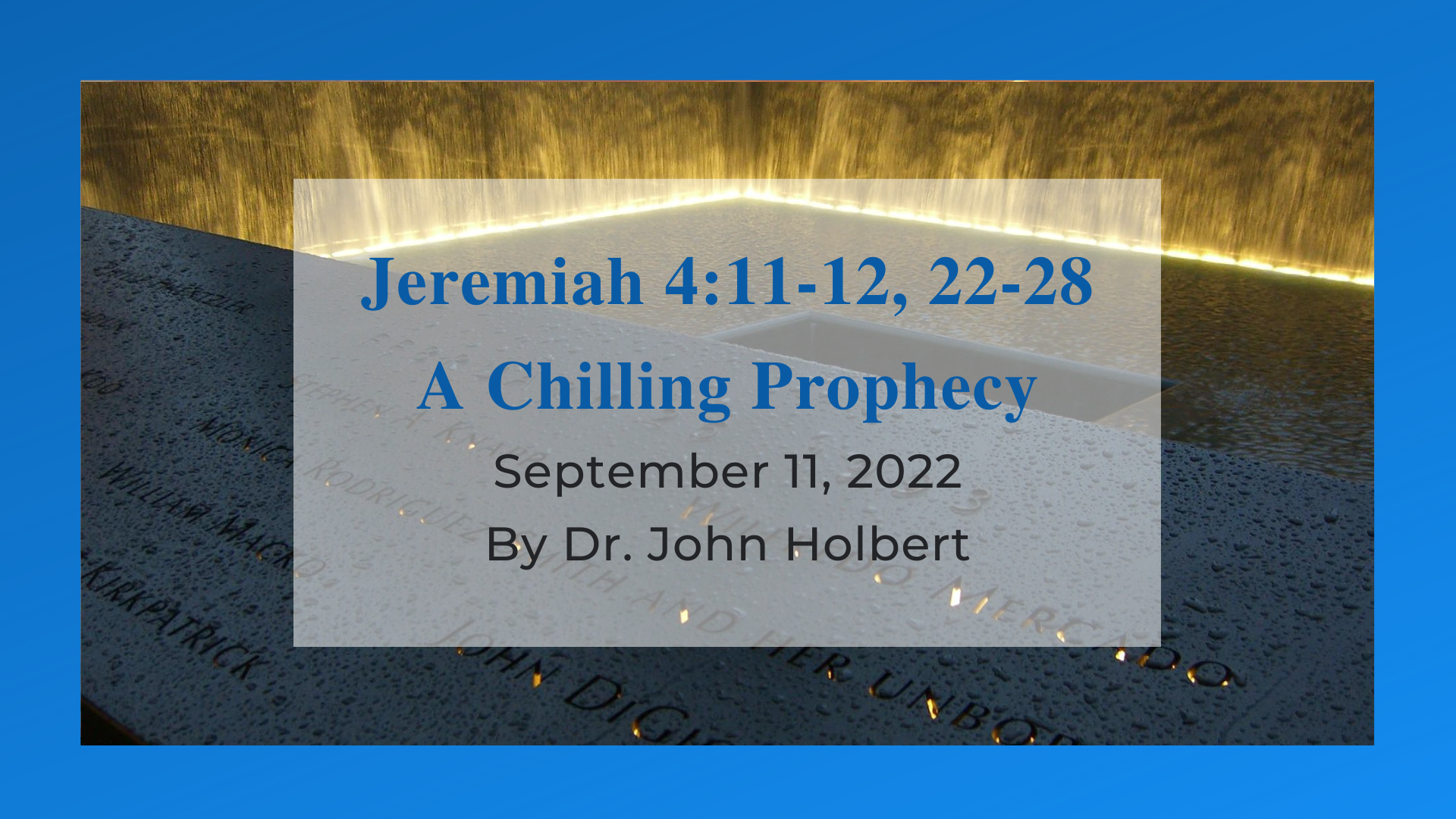 For those of us in the USA, Sept.11, 2001 has become an unforgettably tragic and horrifying day. Now 21 years later, the sting of those images are imprinted behind our eyes and in our hearts: explosions, crashing towers, falling people have become all too much a part of our memories. Before that monstrous day, in our family, Sept.11 meant only one simple thing: the birthday of my older brother. Now it means death and destruction and chaos and terror.

I was asked to preach on the Sunday that followed, and I imagined that the pastor of that church in the Dallas area would want to recapture his pulpit to speak a word to his people. Unfortunately, his throat doctor had strictly forbidden him to preach for an extended period; thus I was still on the hook to preach. It was one of those days when every preacher knew precisely what was in the minds of every parishioner, and should then take that appalling attack into full account. I have been told, astonishingly, that a huge number of sermons on that day said nothing at all about the assaults on New York and Washington, and the crash of one plane into that Pennsylvania field. What were those preachers thinking?

On that fateful Tuesday, I was, as were many, glued to the TV in my office at school, watching again and again as the two giant towers fell into massive piles of rubble, and as the Pentagon was pierced by still another giant jetliner.  Later, after calling the pastor and asking him if I was still on to preach, I turned to that lectionary text for today, from the Hebrew Bible, because that is always where I look first. And it was this very text, Jer.4. I was immediately chilled. “I looked at the earth: See! It was a complete waste! And I gazed at the skies, and there was no light! I looked at the mountains: See! They were shaking and all the hills rocked to and fro!” (Jer.4:23-24). That was scary enough, but then I read this: “I looked: See! No one at all! And all the birds of the skies had fled! I looked: See! Carmel was a desert and all its cities ruined in the face of YHWH, in the face of YHWH’s fiercest anger” (Jer.4:25-26).

Two ideas came immediately: what I translated as “complete waste” is the second and only place those two Hebrew words appear together in the entire Bible. The other is found in Genesis 1:2, the description of the earth before God began the act of creation. NRSV reads the two places differently: Gen.1:2 “formless void;” Jer.4:23 “waste and void.” I read as a hendyades, when two nouns are joined together, one may become adjectival, hence my “complete waste.” I have long thought the words are chosen more for their sound rather than for any clear meaning: “tohuwabohuh,” it says, words that have passed over into English as “tohubohu,” meaning “chaos”. Yes, it really is an English word! I love grammar, and so that little series of facts floated through my mind. But, goodness, I still had to preach!

The second idea was a far more dangerous one: Jer.4:26 implied that these monstrous events had occurred due to the “fierce anger” of God. It did not take very long for certain evangelical, right-wing TV preachers to pounce. “God has lifted the veil of protection off of America,” thundered one, “because of the wanton immorality of the people: homosexuality and fornication!” That from the redoubtable Pat Robertson. Jerry Falwell and James Robison, among a host of others, followed similar lines. I simply had to counter those claims, all of which I believe to be monstrous misapprehensions of the gospel of God. However, there can be little doubt that Jeremiah says something very like that, although his list of evils would be far different than those enumerated by television’s chief mountebanks. Jeremiah spends the bulk of his prophecy talking about the shortcomings of Judah and Jerusalem, focusing on their refusal to take care of the marginalized among them, represented by the famous list: orphans, widows, immigrants, and foreigners.

And there I found my hook for the sermon. The towers were not knocked down for no reason. Those who flew those planes that day were deeply aggrieved due to much of the world’s refusal to pay attention to the vast gulfs between rich and poor. I of course knew that Osama bin Laden, the mastermind behind the attacks, was hardly poor; in fact, he was quite rich indeed. And for him, a furious Muslim, the airplanes turned missiles were the wrath of Allah against the deviant Christian and Jewish west, far more than the west’s refusal to take with any seriousness the plight of the world’s many poor. Still, behind the Muslim-Christian struggle lay the much more painful fight for equality among the world’s peoples, and I tried to suggest that Sunday that the terror of Sept.11 had more to do with that struggle than a supposed Muslim-Christian fight.

And I wanted to say that it was Osama bin Laden who saw the world in Manichean, black-white, terms; the west is evil, while the Muslims are on the side of right. In short, Osama thought as Jeremiah did; Allah was venting his justifiable wrath on the US in the person of western jets become flying bombs. I urged all of us to think differently than that. YHWH God did not lay waste to New York and Washington to pay us back for our gross evils, however, they could be defined. I hoped with them that we would not seek some kind of military revenge for what we witnessed that day.

My sermon was obviously a failure, as the Iraq war began all too soon, though of course Iraq had exactly nothing to do with Sept.11, as we all learned to our chagrin and horror. Ironically, we had become what Jeremiah claimed YHWH was; the avenger of the evil ones. But thousands of dead Iraqis and thousands of dead and maimed American soldiers did little to solve any problems begun by the fury of Osama and his ilk.

I am haunted by that sermon that day. The congregation featured uniforms of many kinds, from Cub and Boy Scout to Marine, Army, and Air Force. Between the two worship services, someone had moved the American flag to within two feet of the pulpit, making it plain that America was still here, still strong, and would not take this attack lying down. I fear any Christian message that day was downed in the waters of a strident patriotism, and that patriotism lead us once again into war with an enemy we could hardly name or track. 21 years later the vestiges of that war first with Afghanistan and then Iraq still resound in our lives. And I remain wholly dissatisfied with what I said that day. Sometimes, sermons are whispered in a hurricane, and that was one of those days. Still, was it not amazing that Jer.4 was that day’s text? I count it perhaps as a possibility missed, a sermonic event that failed. I can only hope that God made something of it more than I was able to do.