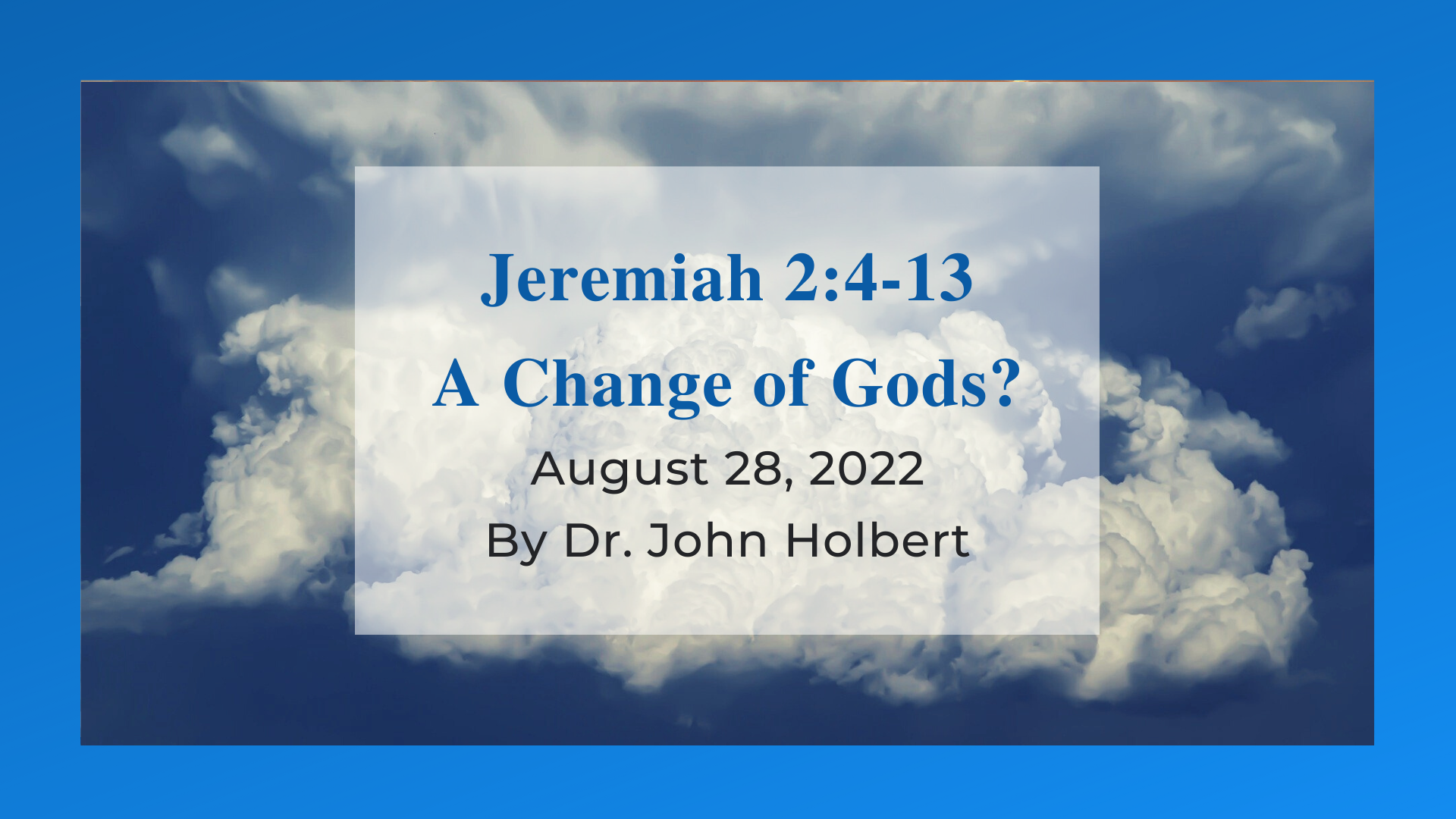 A Change of Gods?

The first text from Jeremiah that we examined last week made it plain that the prophet had been singled out by YHWH for service even before his birth, such is the conviction of Jeremiah’s calling by God. He is chosen and set apart for an immensely difficult task, a task that will involve a heavy dose of proclaimed negative demands that will result in “plucking up, pulling down, destruction, and upset,” jobs designed to make the prophet little less than anathema to any who will hear what he has to say. This nearly preordained rejection will in turn lead the prophet to painful loneliness and despair (see Jer.20 for the extreme example). But YHWH sees the situation in 7th century BCE Israel as especially dire, and hard times call for a hardened prophetic message—this is not time for comfortable words, empty words of “peace, peace, when there is no peace.”

Today’s text demonstrates just how terrible and lost the nation of Judah has become. The problem begins with a lesson in history, often the ground of an Israelite prophet’s basic issue. “What unrighteousness did your ancestors discover in me that they became distant from me, running after emptiness, becoming empty themselves” (Jer.2:5—all translations are my own). The NRSV’s reading of generic “wrong” does not capture the harsher implications of the word; ancient Israel is said to accuse YHWH of “unrighteousness,” not some generalized wrong. The ancestors of the modern Judahites not only rejected YHWH, a fact that the biblical story makes plain, but they in reality claimed that YHWH was “unrighteous,” not acting toward them in ways that they had always expected. Because of that accusation, they “became distant” from YHWH, and ran after “emptiness” and became thereby “empty.” The word is that infamous one that begins the later book of Koheleth (Ecclesiastes, more commonly), translated in the KJV as “vanity.” More basically, it means “insubstantial” or “empty.” In short, ancient Israel exchanged the support and care of YHWH for something empty and useless. This will be the theme of the problem YHWH and Jeremiah see in modern 7th century Judah.

The reason that this absurd exchange of YHWH for emptiness occurs is due to the simple fact that no one any longer remembers what YHWH has done for them through the centuries, and therefore no one talks about it anymore. “They did not say, ‘Where is YHWH who lifted us out of the land of Egypt, who guided us through the wilderness,” that terrible place of dry pits, unspeakable dangers, devoid of any inhabitants (Jer.2:6)? That central statement of Israel’s faith and life—YHWH brought us out of Egypt—has been forgotten and remains unspoken. Once that foundation is lost, the building that is Israel threatens to collapse. In fact, that collapse has already begun, as Jeremiah will proceed to show.

“I brought you to a fertile land,” the fabled land of promise, the land of Israel, but “you polluted my land” and made it “detestable” (Jer.2:7). The wonderful “land of milk and honey,” given freely by YHWH to the wandering escapees from the slavery of Egypt, Israel “polluted” and made “detestable.” The word used is often translated “abomination,” a cultic term of extreme pollution, indicating disgust and revulsion. The fruitful land has become foul and execrable due to the disgrace of the chosen people.

This disgrace was also aided by the priests who likewise stopped asking “Where is YHWH” along with the Torah interpreters, the “shepherds” of the people (the kings), and even the prophets who spoke only in the name of the appalling Baal, the Canaanite storm god, rather than in the name of YHWH (Jer.2:8). Just like the ancestors who ran after emptiness, so the leaders of Judah—priests, preachers, kings, and prophets—all have run after “things with no benefit.”

And so, YHWH “again indicts them.” The NRSV translation, “accuse” does not quite achieve the nuance of the Hebrew which comes directly from the language of the courtroom. YHWH “indicts” Israel again, as one often hears from prophetic oracles—see Micah 6 for a classic illustration. YHWH wishes to drag the people into the court and not only the current crop of rogues, but also their offspring as well. The divine demand is that they head west to Cyprus and then east to Kedar to see if any of those foreigners have acted as ridiculously as these Judeans. “Has a nation ever changed its gods, though they are not gods at all” (Jer.2:11a)? Surely, no human beings could be so foolish! But, amazingly, “my people have exchanged their glory for a thing with no benefit” (Jer.2:11b). Even the skies themselves, that fabulous covering that YHWH Elohim made at the very beginning of everything (Gen.1:1), are “horrified and completely appalled” (Jer.2:12).

In summary, Judah has “done two evil things:” they have rejected and abandoned YHWH, the fountain of living waters, and in YHWH’s place they have dug wells for themselves, pathetic excuses for water holders, because they leak and can hold exactly nothing. What Jeremiah appears to be saying is that Israel has shattered the 2nd of the Ten Commandments. “You must not have any gods in front of my face,” that is anything that would replace YHWH as the central focus of anyone’s life and thought. Jeremiah will continue in his long prophecy to describe what those substitute gods may in fact be: injustice, greed, lust for power, among much else. Paul Tillich’s famous formulation for what God must be for us, namely our “ultimate concern,” or “the ground of our being,” well delineates what Jeremiah is saying to his own people. A rejection of YHWH leads to the acceptance of other things as ultimate concern, as ground of being, and such an exchange leads to a desire for self-sufficiency, a will to go it alone, a conviction that we have no need for God or God’s call for justice and righteousness among all of God’s people. But, when we move in that way, we build failed wells, cracked cisterns, incapable of holding water. Lives, whether ancient or modern, cannot be fulfilled without attention to the God who made the skies and the earth, the God who sustains all that is, the God who is ever-loving and ever-calling for a beloved community of all that God has created. “Has a nation ever changed its gods,” asks Jeremiah, and our honest answer must be: all the time! The result was, is, and always will be disaster. History makes that point all too clearly.