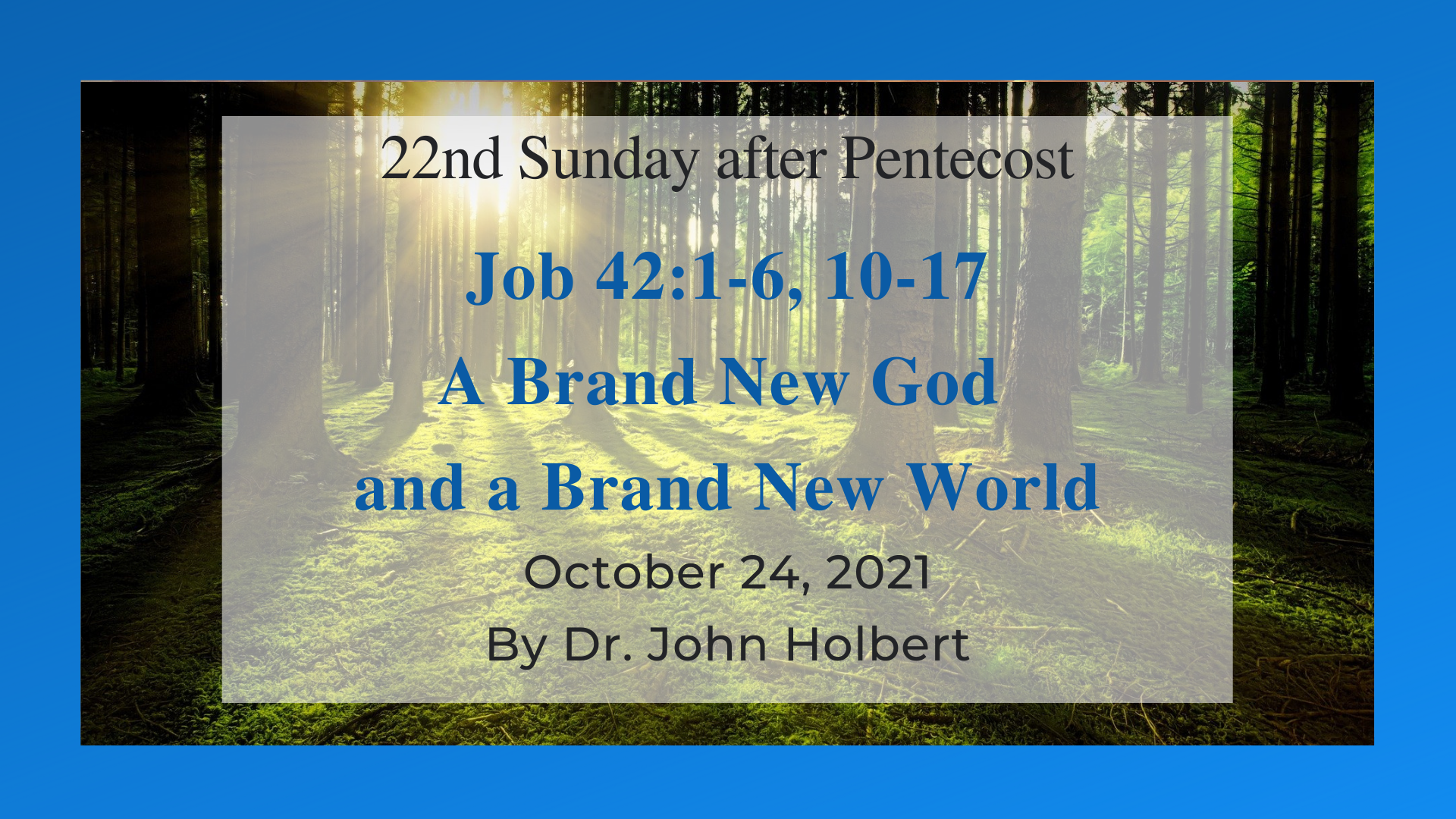 Job’s response to the capacious speeches of YHWH has produced no end of attempts of understanding. Given what I have tried to explain in my previous three readings assigned by the Revised Common Lectionary, I find the reply quite straightforward once we clarify a few of the troubling places. We are told that Job’s short speech is in fact an “answer” to what God has just said (Job 42:1). There is a brief difficulty in the opening verb of verse two since it has been written as a second person verb, but it has been pointed (vowels added) as first person, hence either “you know” or “I know.” Most translations read it as first-person since Job has never anywhere in the story denied that God is capable of doing “all things,” and that “no purpose of yours can be stopped.” God’s overwhelming power has not been Job’s concern, since it goes without saying that God is capable of anything God chooses to do.

42:3 is clearly a quotation from an earlier speech by YHWH: “Who is this who obscures my counsel without knowledge” (Job 42:3a)? It is not a direct quote from 38:2, but the implication is the same; God has challenged Job to admit that he has spoken without sufficient knowledge of God and has thereby “obscured” or “darkened” God’s counsel, or perhaps one might say God’s “design.” Job now admits that he has indeed “uttered what I did not understand, things more amazing for me that I did not know” (Job 42:3b). Vs.4 quotes God again: “Listen! I will speak; I will question you, and you will help me to know” (Job 42:4). Job concludes that God really did want a dialogue from Job, and was not only interested in shutting him up with an enormous display of divine power, a conclusion Job expressed in his first reply to God at 40:3-5. Because Job has now expressed his certainty that God desires a response from him, and will listen to that response, Job offers one. Unfortunately, the translation of Job 42:5-6 has often been garbled in order to make Job’s reply fit a predetermined notion of what many readers desperately wanted Job to say, rather than listen carefully to what he actually says. This is especially true of the NRSV whose translation here is thoroughly impossible and completely misleading.

“By hearing of the ear had I heard of you, but now my eye sees you” (Job 42:5). All of Job’s prior knowledge of God had come through what he had been told by others, what he had studied on his own, knowledge gained “without knowledge.” But the speeches of God have somehow enlightened Job, have made him realize that his former perceptions of God were dangerously and thoroughly wrong. And by implication, the views of the friends of Job, views that Job had shared, are also in error. We should note carefully that the content of what Job now claims to know about God is not at all plainly revealed; it is still necessary for a reader to extrapolate from God’s long address just what is revealed about God. At the very least, Job and we have learned beyond a shadow of a doubt that God does not in any way reward the righteous and punish the wicked. And we learn, in the light of that fact, that the universe of God is deeply complex, richly ambiguous, red in tooth and claw, filled with danger and grit. God has not created a simple world, and those speeches make that plain.

As a result of Job’s new knowledge of God, however, it is to be enumerated, Job concludes by saying: “Therefore I recant ( or perhaps “I desist”) and I change my mind on dust and ashes” (42:6). NRSV’s “I despise myself” is patent nonsense; the Hebrew simply will not sustain any reading like that. Besides, such a translation makes a mockery of what the book is trying to say. Job does not perform some sort of “sawdust trail” act of conversion in the light of God’s speeches; he instead “recants” his foolish claims about God, realizing now how ridiculous they were in the light of God’s revelation to him, and he vows to “change his mind,” the common meaning of this verb (even including God’s change of mind on occasion—see Ex.32:14 for a parade example), even while he is still on dust and ashes. His demands for simple rewards for his peerless piety have ended since he now knows that God is hardly in that business in the universe God has made.

The epilogue of the tale has too often been dismissed as a piece of pious doggerel that undercuts the entire attempt on the part of the author to confront and destroy that ancient notion that God does reward and punish. I do not think so, but again the translation is important. The NRSV follows many translations of 42:10 when it reads “And YHWH restored the fortunes of Job when he had prayed for his friends,” suggesting that Job’s exemplary piety of prayer for his enemies moves God to give him back double of everything he had before, thus neatly saying that the entire book’s concerns have been a complete waste of words. However, if the Hebrew is translated more literally, what 42:10 says is “YHWH restored Job’s fortunes and he prayed for his friends.” The text makes no connection between those two acts; Job’s prayer does not move YHWH to reward him. In fact, YHWH here acts freely in whatever way YHWH chooses to act; Job’s reception of a new family, renewed wealth, a restored community, and a very long life are one and all YHWH’s gifts to him. And we should note that this world is indeed a very new one; Job’s daughters are here given names and property rights, flying in the face of traditional religious law wherein women had no access to property unless there were no male heirs to inherit. Job’s new seven sons are bypassed in the line of succession, a very surprising reality indeed!

And we must not miss 42:7 either. YHWH speaks to one of the friends, Eliphaz, for the one and only time in the entire story. “I am furious with you and your two friends (sorry, Elihu!), because you have not spoken to me rightly like my servant Job.” How has Job spoken “rightly”? The adverb in a moral sense means to direct one’s life in the right way. Job, it must be said, had many horrifying things to say about God, a God he imagined had become his enemy, indeed the enemy of all. But God’s appearance to him made him “recant” all that. Yet, I do not think that is exactly what YHWH means at 42:7. The sharp-tongued, unyielding Job, who refused to knuckle under to the friend’s avowed pieties, is the sort of dialogue partner that YHWH prefers. Better that than the hollow and callow language of cant offered up by the friends. When God finds Job to God’s liking, God frees all worshippers to bring truth to God, no matter how harsh, no matter how painful. Like those harsh psalms of lament and complaint, Job pulls no punches with God, and neither should we.

This sprint through the tale of Job, confined to four brief weeks, barely scratches the surface of the story’s richness and complexity. May these four weeks whet your appetite for further work and reflection on this fabulous narrative, for there is much, much more than a careful reading can uncover.