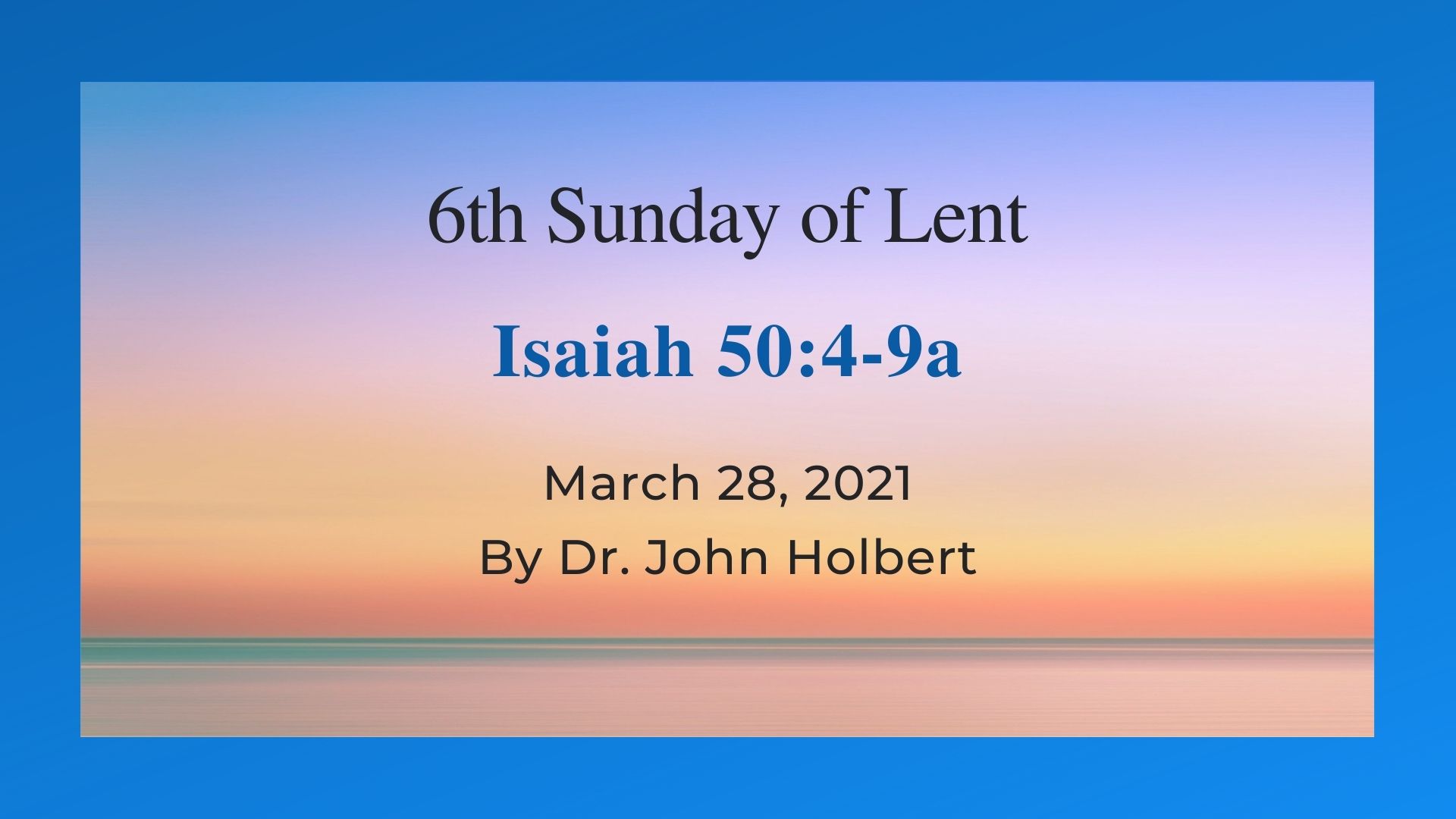 A Servant of God

You know that Easter is on the near horizon when texts from 2-Isaiah begin to appear, especially texts from the four Songs of the Servant. Today’s pericope constitutes the 3rd servant song, a part of Isaiah’s exploration of the servant of YHWH, who is called to work for God, but remains deeply mysterious concerning clear identity. Though the second song, found in Is.49, explicitly names Israel as the servant (Is.49:3), that is the only time in the four that any name is provided, suggesting that Isaiah is perhaps less concerned with the identity of the servant than with what the servant is asked to do. There can be no doubt that early Christians went to these texts again and again for clues concerning their understanding of the one they called Christ, Jesus of Nazareth. It must be concluded that their portrait of Jesus relied heavily on the four servant snapshots that Isaiah offered to the exiles of Israel, over 500 years prior to Jesus’s birth, and this third song gives to us further insight into their perceptions of the one they called savior and Lord.

But we must always ask, before we leap the half-millennium that separates Isaiah and Jesus, just what those Babylonian exiles heard when they encountered these songs? Only by taking seriously the original context of Isaiah’s words may we more fully grasp what the prophet had in mind in the 6th century BCE, and by exploring what that word may have been for them, we may be aided in our attempt better to evaluate those Christians’ appropriation of the word for their experience of Jesus. For the purposes of this essay, I will assume that Isaiah did have Israel in mind as he spoke of YHWH’s servant, though exactly what he meant by his use of Israel as servant may be more complex than a simple identification of the servant with the nation, or even with the exiles to whom he was speaking.

“Lord YHWH has given me a student’s tongue,

in order that I may know to sustain the weary with a honeyed word” (Is.50:4)

The prophet begins his portrayal of the servant with the idea that the servant is a student of God, eager to listen carefully to God’s call,  and to act on that call in a very specific way. The student’s first lesson is God’s instruction that the servant is to understand and practice the sustenance of “the weary” with a “honeyed word.” The adjective “honeyed” (if that is what the word means here, which is not certain) is usually deleted in translation, as has occurred in the NRSV. However, I assume the word of the servant for the weary must be a sweet one, if it is to have the desired sustaining effect. The word for “weary” is seldom used in the Hebrew Bible, but it is found in 2-Isaiah several times, most particularly in Is.40:28, where it is said that “God does not grow weary,” and in 40:30,31 where young men “grow weary” and faint, but when they “wait on YHWH, they will mount up on wings like eagles.” Hence, we may conclude that the first work of the servant is to offer strength to the weary, fulfilling the power of God’s work.

“Morning after morning God wakens my ear to listen as a student; YHWH God opened my ear,” says the servant, repeating the basic work of this student whose work is to buoy up the weak (Is.50:4-5). In response to the lesson, the servant affirms, “I was not rebellious; I did not turn back,” meaning that the servant stayed steadfast in the work of strengthening the weary. But apparently, this work was not approved by everyone, because the next verses describe violent attempts on the part of someone or some group to stop the servant’s work. “I gave my back to the strikers, and my cheeks to those who would yank out my beard; I did not hide my face from insult and spitting” (Is.50:6). The reasons for the angry reactions to the servant’s work remain mysterious; exactly why would the work of helping the weary create such monstrous reactions?

We may only hazard a guess at the reasons for this behavior. Might it be that in an ancient culture of violence, where everyone was expected to pull their own weight and not expect anyone to show pity on weariness, the acts of the servant are seen as weak, flying in the face of a culture that shares little pity for those on the margins of society, in this case the weary, the fatigued, perhaps beaten down by back-breaking work for tiny wages, work that was menial and despised? We know that earlier prophets had regularly chided Israel for its refusal to take seriously the call of YHWH to pay special attention to the poor and the weak, the widows, immigrants, foreigners, and orphans. Might this be what Isaiah has in mind?

Though that is a reasonable surmise, the next verses raise some question about that answer to the mystery of the fury against the servant. “Lord YHWH helps me; that is why I have not been humiliated, why I have set my face like flint; I know that I will not be shamed” (Is.50:7). Just why would anyone be “humiliated” and “shamed” for providing sustenance for the weary? Would not such a person be lauded for such behavior, singled out for such seeming righteous acts? Though that may be true for us, it is clear that in this scene, the servant’s attempts to help the weary have not led to applause but to violent anger.

“My vindicator is close; who can drag me to court?

Let us stand together.

Who are the controllers of my justice who approach me” (Is.50:8)?

Here the servant sounds decidedly confident and combative; whoever these angry ones are, their attempts to stop the work of the servant are bound to fail, since the “vindicator,” (literally “the one who makes me right”) is near, and even if the adversaries should charge the servant with some crime worthy of a courtroom case, the servant is not afraid. That lack of fear is the result of a rock-hard certainty: “Look! Lord YHWH helps me; who dare call me guilty? All of them will wear out like a garment; a moth will devour them” (Is.50:9).

What could all this mean for Babylonian exiles? What is this servant to do for them? Surely, they would apply the word “weary” to themselves. If Isaiah is writing his words late in that exile, and his reference to Cyrus in Is.45 suggests that it would have been sometime around 539BCE or soon after, then 50 years have passed since the destruction of Jerusalem. Weariness would have been a central feeling among these Judean exiles, many of whom would never have seen that city at all. This servant, promises Isaiah, perhaps a group of those exiles, a group dedicated to the aid of the rest, the “true” Israel,” will help and bring hope and comfort to the weary among them. That might mean that the angry ones who are less than pleased with the servant’s work, could be other members of the exiles who have become cynical, questioning any possible help from the mysterious YHWH, or who sense that a return trip to Jerusalem, a place they know nothing about, is dangerous and useless. Better to stay in Babylon, they shout! Leave us alone! Take your would-be sustenance somewhere else!

If that surmise is the slightest bit plausible, then it sounds not unlike the world in which we live. Many of us have become cynical, inured to words of hope and succor, tired of claims of future possibilities in the power of God. Yet, Isaiah says that YHWH has sent to us a servant whose work it is to present to us strength in our weakness, light in our darkness, and hope in our despair. That is surely what those early Christians saw in Jesus, and saw in his life the picture of Isaiah’s servant, one who stood against those who would negate his work as one sent by God, taught by that God to offer help and strength to those in desperate need of both. And that suffering servant comes to us Christians again this Lent and this upcoming Easter, with a face fixed like flint, standing tall against any who would deflect his call from God, even should that call lead him to his death. I suggest that both Isaiah and those early Christians knew and trusted that God would not leave them in their hopeless weariness, but would send a servant to help them. And so God did and so God does still.