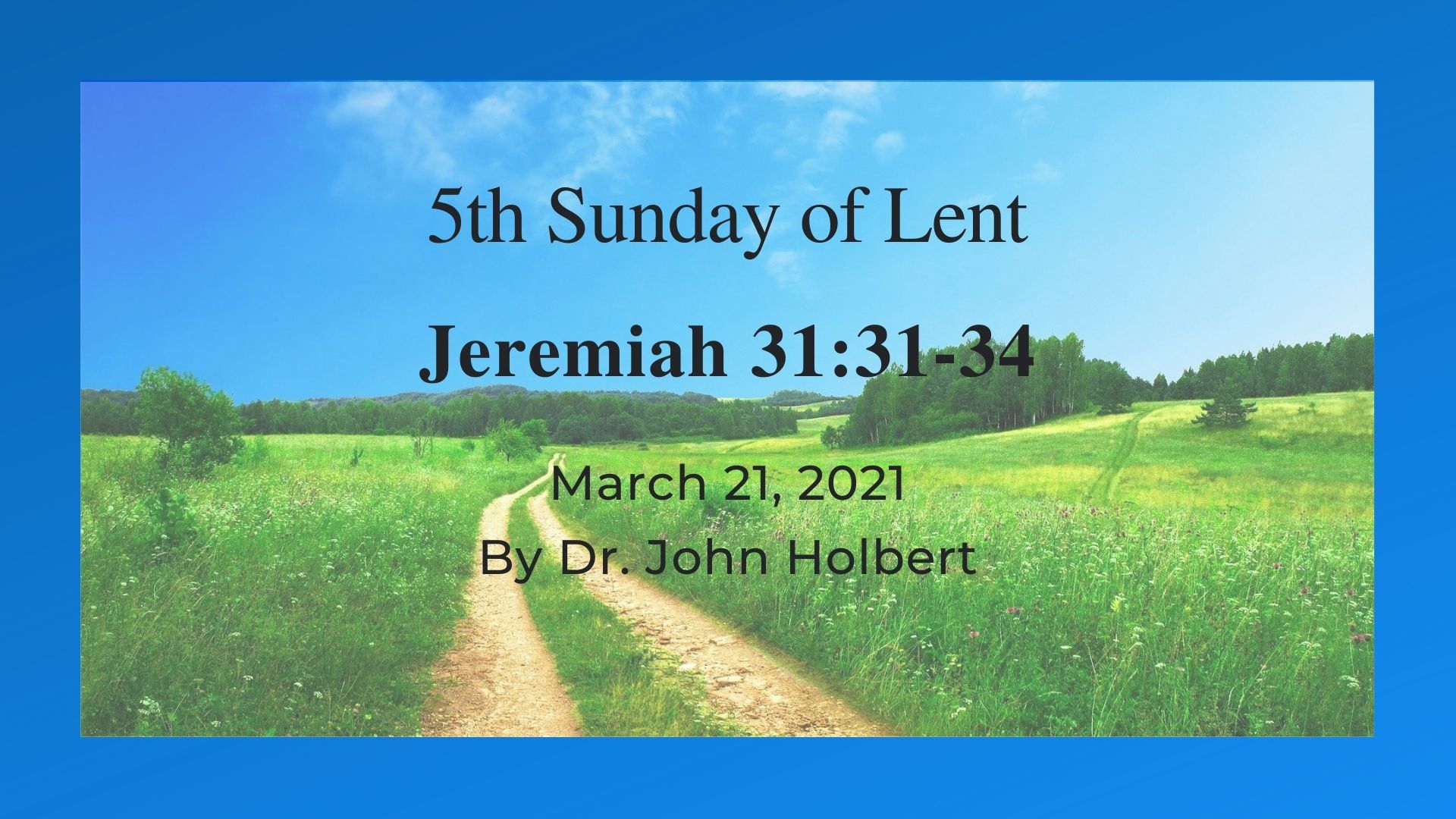 Today’s text from Jeremiah is certainly one of the most famous of all texts from the Hebrew Bible, given its later application to what was said to be “the new covenant in Jesus Christ” by readers of the New Testament. In fact, not a few of these readers, both ancient and modern, went so far as to say that the “old covenant” (the Hebrew Bible) had been made antiquated and finally useless in the light of the new covenant of Christ, referenced in the New Testament. Thus was born the great spilt between the Bible’s two testaments, the first one judged “old,” as in outdated and seldom any longer needed, and the second “new,” as in fresh, up-to-date, and all one really needs. This sharp division, announced from pulpits and lecterns over the past two millennia, has made the “recovery” of the Hebrew Bible for contemporary Christians arduous work. I should know, since I have been at the work for all of my 50 scholarly years.

However, my intention in this essay is not to rehash the many arguments that I, and many others, have garnered to combat that simplistic and wrong-headed division I noted above between the Bible’s two testaments. The Bible is in reality a whole thing, a recounting of the whole story of God, from creation to consummation, and without the Hebrew Bible that story is necessarily truncated, only a portion of the tale, and the smallest portion at that. We Christians desperately need the Hebrew Bible for our faith, and no nostrums about “old” and “new” will weaken that need.

Still, what I want to get at in this writing is the astonishing idea that Jeremiah offers in his small, though potent, pericope. To put it most distinctly, if the prophet is right here, all of us reading this piece, including the one writing it, have been given our pink slips from on high; if this new covenant is fully enacted by YHWH, we are all out of a job! And for that we ought to be very glad, though I imagine that those of you are still not retired may find this news somewhat painful. Because I am 74 years old, these tidings appear to me less than sad; I, of course, will not claim to speak for you. Let us probe the text a bit more to see exactly how Jeremiah is attempting to make us all redundant, as our English friends are fond of putting it.

The book of Jeremiah is hardly a through-composed piece; it zigs and zags from theological history to prophetic poem to some actual history to projections for Israel’s future. And all of this is not done in anything like chronological order. Thus, to find a specific historical context for any of the various textual bits is always guesswork at best. This is certainly true for Jer.31. The chapter appears in the broader literary context of conversations about what happens to Israel after its exile to Babylon, a certainty for Jeremiah, however much his rival Hananiah tried to counsel the Judeans otherwise (Jer.28). That exile, proclaims Jeremiah, will be a lengthy one, and indeed it does last about two generations (587BCE to 539BCE). What will a post-exile look like, asks Jeremiah, after the cream of Judah has been banished to the world’s greatest city for a long time; how will that world differ from the world that they left behind in Judah, prior to the Babylonian destruction of the city? Jer.31 raises a particular concern that must have been prominent among the theologians of his day.

After exile, he says, that old and venerable covenant, the one YHWH made with the famous ancestors, that one that was based on YHWH’s miraculous handholding of Israel, leading them out of Egypt, has been rendered moot by the appalling actions of one of the covenant partners not named YHWH. In fact, not to put too fine a point on the matter, that covenant was “broken” by Israel. That shattering occurred, says YHWH, even though YHWH was their baal (Jer.31:32). Jeremiah here uses, with scornful irony, the name of the Canaanite chief deity, Baal, to describe YHWH who is in the end the only baal there is. In Hebrew the word came to mean “master” or “husband,” as the NRSV translates. However many Judeans turned to the worship of the Canaanite Baal, an idolatry that in part led to their exile; that so-called deity does not in fact exist, or if he does, has no power or authority in the face of YHWH who is “master” over all. That covenant has been made void by the repulsive and ridiculous actions of YHWH’s chosen people, actions that include not only idolatries but also comprise refusals to be concerned with the marginalized in their community, the widows, orphans, immigrants, and others in special need of care. These terrible acts were performed in the presence of a YHWH who specifically demanded actions of justice and righteousness, but instead watched while the people simply refused to do anything of the kind.

Hence, says Jeremiah, quoting that very YHWH, “This is the covenant that I will make with the house of Israel after those days,” that is after the days of exile (Jer.31:33). “I will place my Torah within them, will write it on their hearts; I will be their God, and they will be my people” (Jer.31:33). The written Torah, made manifest in the tablets from Sinai, and codified in more detail in the books of Numbers and Deuteronomy, have been a rank failure. All the learned explications of that Torah, suggested by the wise scholars of the courts of Israel and Judah over the preceding centuries, have done little to stop the evil behaviors of the people to whom they were given. Something quite new is needed, and YHWH now offers it to the exilic survivors. God will now perform great divine surgery, will split open the chests of the people, and will place the Torah directly inside them, writing it straight on their hearts, the heart being in Hebrew anthropology the seat of will and intelligence. Only in that radical way, says God, will these recalcitrant and wayward people ever get what God has in mind for them.

And since all people in this new covenant will have the Torah within them, you and I, we teachers and preachers, must seek other employment. “No longer will they teach one another, no longer tell one another, ‘Know YHWH,’ because they all will know me, from the least to the greatest, says YHWH” (Jer.31:34). “And then, (and only then?) I will forgive their iniquity and remember their sin no more.” Well, of course! If we all have Torah written directly into our minds and wills, we will hardly be able to sin, since we will only contemplate and live in the full presence of the God of the universe. In that state, there can be no sin or iniquitous actions, and finally no need for divine forgiveness. Sin and iniquity will be no more!

Such a grand vision! Such a rich wonder! However, the readers of the New Testament went way too far to assume with the coming of Jesus, such a vision was now fulfilled. It only takes a brief and superficial glance at the past 2000 years of human history to conclude that the assumption that the New Testament was coequal with Jeremiah’s new covenant was a false assumption. Pre-exilic Judah well resembles subsequent human history with its rejection of the marginalized poor and its fatuous idolatries of wealth and power and greed. In no way that can be at all perceived has the new covenant been as yet fulfilled; we live still in decidedly pre-exile days of sin and iniquity, though it may be said that our sins and iniquities have far-outstripped the more limited imaginations of the ancients. We now include environmental degradation, vast racial disparity, and a greed beyond any comprehension in our growing list of sins.

But it must be said that Jeremiah’s vision of the new covenant still gleams as a distant goal of YHWH, a possible hope for a better future for all of us, human and animal and plant. And that future for us Christians is bound up in Jesus Christ who offered himself as servant of all and slave of all, giving his very life for that future. That future, however, still remains only promise, that new covenant merely hinted. It is our work to join God in moving our world, God’s world, toward, however haltingly, however slightly, that new world. Perhaps all of us, preachers and teachers alike, can breathe a deep sigh of relief; we still have jobs after all! In our time we still need to teach and preach with one another about this new covenant of hope. So, let’s get back to that work!