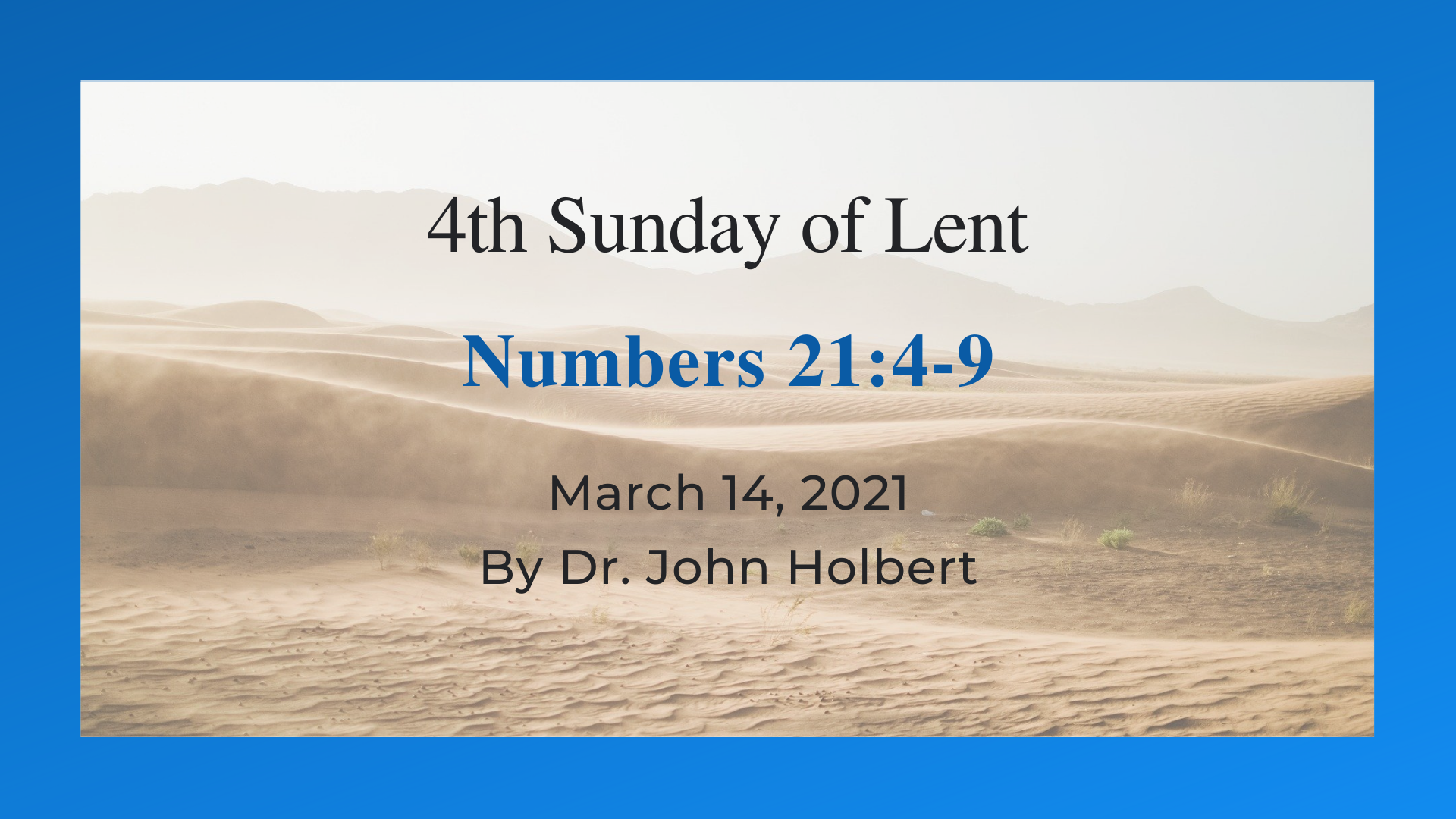 I have a confession to make. I understand confession is good for the soul, so here goes. I have always found this passage from the book of Numbers completely absurd. Its absurdity is only transcended by what the Gospel of John tried to do with it! Fiery poisonous snakes biting the terrified and complaining Israelites, saved by Moses’s creation and erection of a bronze model of a serpent, leading to John to think of hoisting Jesus up on the pole of a cross, both offering some sort of saving act for the people and for the world, indeed! It really is too ludicrous! How can a preacher with straight face stand in the pulpit of the 21st century and expound on those serpents, that bronze pole, and that famous cross all in one extended breath? Our people already have a difficult enough time getting their heads around parting seas, magic desert bread, prophets raising folk from the dead, not to mention that rather more famous death to life bit in our New Testament. Now they are asked to envision nasty snakes (of fire or poison?), sent by YHWH no less, apparently because the people dared to question Moses and God concerning the complete lack of food and water in the wilderness. It is just too much to swallow, I think, and spreads a pall over the ancient text as a series of tales “told by an idiot, full of sound and fury, signifying nothing,” if I may quote the bard from a very different context. I do not fault any preacher who rushes off to the New Testament, desperate for a gospel word to cleanse her palette of those filthy snakes.

Of course, John has rarely been known for his rational thought, though he does indeed get off some very fine lines. Just before this weird allegorical use of Numbers 21 in his chapter 3, he does provide what may well be the most quoted biblical line in 3:16. No need to quote it here; you all know it by heart. But that grand line is preceded by a quite troubling one: “If I have told you about earthly things and you do not believe, how can you believe if I tell you about heavenly things” (John 3:12)? Yes, how about that? And then John proceeds to tell us one of those heavenly things, I suppose, but recalling for us that strange snake bit in Numbers 21 about the bronze pole of Moses prefiguring the raised cross which is Jesus’s terrible destiny. I have long thought that Jesus here offers his readers something of a self-fulfilling prophecy; just how are we to believe (believe what exactly?) if he starts speaking of “heavenly things?” After reading this section, I am, I fear, a good deal more confused about what he means than I was before I read it.

And so, back I go to Numbers and its snakes. In the past, when I have encountered this text, I have often reverted to that rather hilarious piece found in vs.5. “Why have you brought us up out of Egypt to die in the wilderness? For there is no food and no water, and we detest this miserable food!” Really? They complain there is no food and then complain that they hate the miserable food! Obviously, this Israelite mob is either badly confused, deranged by the rigors of the desert, or they are merely whiners of the first order, wanting steak medium rare, instead of the bizarre manna (“what is it?”) and the surfeit of quail (Num.11), washed down by magic water from a rock. YHWH’s reply to their complaining is always the same; fury followed by some loathsome plague or other—too much quail, or foul disease, or writhing snakes. And in each case of God’s anger, there follows a kind of relenting from the God, often brought about by the power of Moses, who regularly seems as angry at the wastrel Israelites as God is. Moreover, Moses is at times just as angry at God as at the people. The entire tale revolves around complaining, anger, and delayed relenting of anger, both on the part of God and of Moses. In the end, the whole thing becomes rather wearisome, quite tiring to read. Little wonder that generations of Bible readers have sped through Numbers in order to get to Deuteronomy, which while hardly thrilling reading, at least has a sense of order and purpose to it, and has served Judaism for centuries as the very heart of their faith. Oh, I almost forgot: Numbers does have those delightful, if confusing, stories of Balaam and his talking donkey. Why not have that in the lectionary, rather than these silly snakes? Blame John, I suppose.

Well, what is a preacher to do? Most, I imagine, stay with John as the teacher of traditional Christian salvation, wrought by God through the gift of Jesus for the entire cosmos. Now that will preach! But there remain those snakes in Numbers, slithering and spitting, and biting the complainers in the wilderness; what about them? I suggest taking a long look at Moses’s pole, topped by that bronze serpent, and hope that the snakes pass you by. After all, the wilderness, wherever it is, is a very dangerous place, and always needs a pole or two to aid our passage through. And for us Christians, the pole that saves is not topped by a gleaming snake but rather by a bleeding and dying man, who cared for us enough to offer himself as a gift for all. With that pole all the fiery snakes in the world are snuffed out, setting us free to live the abundant life that God in Christ has offered to and for the cosmos itself. Perhaps old John was not quite so daft after all.