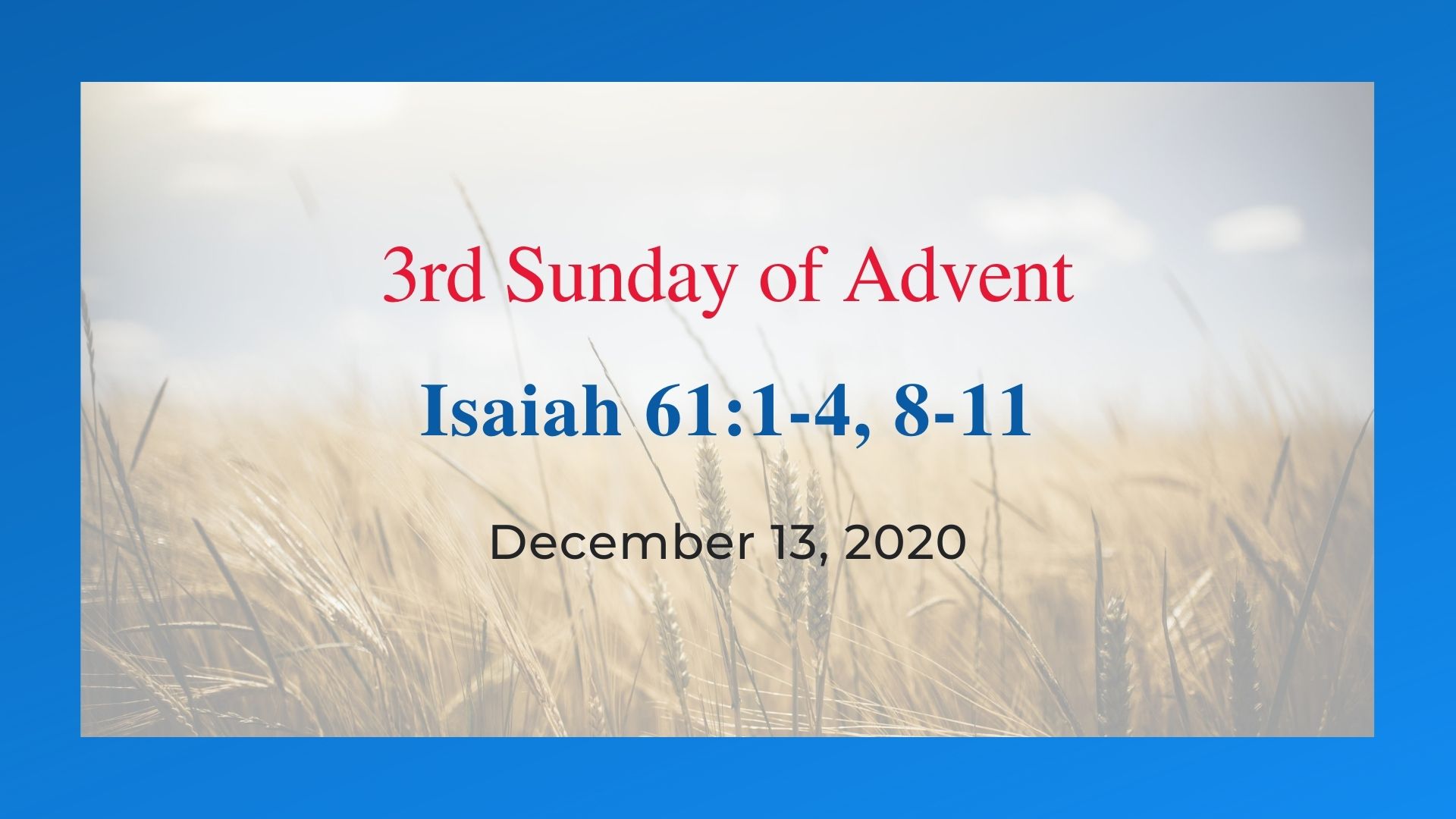 For the third Sunday of Advent we turn again to III-Isaiah, that loose collection of oracles that has played an outsized role in the formation and understanding of Christianity. Today we look at a pericope that has been made famous by Luke’s much later use of it as Jesus’s inaugural sermon of his ministry in his hometown. As we may remember, the reaction to this homiletical offering was less than positive. I have preached more than a few sermons that were received with some discomfort from my hearers, but none of them formed a mob and tried to murder me! They may have thought that (I did once have several hundred members of a congregation get up and leave in protest in the middle of a sermon, but that perhaps had less to do with the sermon than with the peculiar circumstances of the entire event; but that is a tale for another day), but in the Gospel of Luke Jesus actually is nearly killed by an enraged congregation. More of that later.

Is.61 might be considered to be another Song of the Suffering Servant. In II-Isaiah, we find four so-called Servant Songs that have been the subject of vast scholarly and congregational interest. They may be found in Is.42:1-4, 49:1-6, 50:4-11, and, most famous of all, 52:13-53:1-12. It might well be said that this last text has determined for many precisely who Jesus was, that is, the servant who suffers on behalf of all. Exactly who or what II-Isaiah had in mind when these passages were composed has been the source of enormous, centuries-old debate, but it may surely be concluded that for Isaiah, either Israel itself (Is.49:3) or some unnamed figure may be seen as the mysterious and efficacious servant of YHWH. Is.61 sounds many of the same notes.

“The spirit of YHWH is upon me, because YHWH has appointed me to bear news to the oppressed, to bind up shattered hearts, to cry liberty to the captives, release to prisoners, to preach the year of YHWH’s favor, the day of vengeance for our God, to comfort all who mourn” (Is.61:1-2). I am sure you noted the sharply discordant clause in this string of commands to the servant. The servant is to preach directly to the “oppressed,” that is to those whose lives have been shattered, whose bodies have been held captive, and the substance of the sermon is release and liberty, the result of YHWH’s “favor,” all of which leads to comfort for all mourners. That all sounds quite lovely indeed, and provides a portrait of a God whose will and way is comfort and freedom for the marginalized of the society. However, in the very center of the string of “good news” stands the announcement that all of these divine actions represent “a day of vengeance for our God.” There is finally no way to finesse that harsh word, “vengeance”. The anger of the word is made especially clear, because it occurs in the furious prophet Nahum multiple times, a prophet who claims in so many words that the only good Ninevite is a dead Ninevite! In addition, when the covenant is broken, there will inevitably be “vengeance” from God against those who broke it (Lev.26:25). Many other passages make it crystal clear that the word is decidedly disagreeable and nasty. That clause does bring us up short.

Apparently, it brought Luke up short, too, since he noticeably does not include in Jesus’s supposed quotation of Is.61:1-2 that phrase about God’s vengeance. If he is reading the Hebrew text, according to Luke, that would be unusual perhaps simply to delete a line. But if Luke is using the Septuagint Greek version of the Hebrew Bible, where the phrase is softened to “the recompense of God,” rather than the “vengeance of God,” it might be said that Jesus as reader of Isaiah had the right, if not the duty, to interpret what he was asked to read in the synagogue. We really cannot be certain exactly the role of the public reader of Scripture at this very early time in Jewish practice. Was the reader merely to read what he was asked to read, or was he free to interpret and comment on the reading? Given that Jesus goes on after the reading to preach “this scripture has been fulfilled in your hearing today,” it appears that interpretation was certainly possible. What Jesus says in effect is that what you have just heard will happen in my succeeding ministry. And according to Luke, that is precisely what happens, as Jesus preaches particularly to the poor and the oppressed, offers comfort to the mourners, sight to the blind (another way to understand the clause “release to the prisoners,” if understood metaphorically), and promises freedom to those oppressed by the Romans. In short, in his Nazareth sermon, Jesus announces that he is the servant predicted by the prophet Isaiah. And after he continues to chide his fellow citizens that because “no prophet is accepted in the prophet’s hometown,” they should look to their history where both Elijah and Elisha performed their ministries not among Israelites but foreigners. At that, the townspeople become enraged, grab Jesus, and try to throw him off a high cliff. Mysteriously, he is able to escape.

Luke’s refusal to quote the Hebrew call for YHWH’s vengeance in Is.61:2 may be a typical first-century interpretive move, or it may be a way to avoid a difficult and troubling theological idea. Just what are we to do with the phrase in our own time? In any number of places in both biblical testaments the vengeance of God is mentioned as very real. At times, it appears to be little more than a hope that God would destroy Israel’s enemies simply because they were clearly not able to vanquish them on their own. In those cases, Israel imagined a furious God in the sky to match their own fury. But in Is.61 I do not hear the call for vengeance in quite that way. God’s righteous judgment that calls for comfort and freedom and release must at times by accompanied by power and divine strength if any of those things are to be accomplished. Still, we always must remember the words of Paul: “Vengeance is mine, says the Lord.” Because that is true, vengeance is never ours to perform. What we are called to do is to act in the ways of justice and compassion, as both Isaiah and Jesus urge us to do. The power of divine recompense is just that, divine. The one who comes at Christmas brings with him the demand for justice and righteousness for all the people; it is he who is the servant who will preach good news to the poor. May we follow him in that preaching.