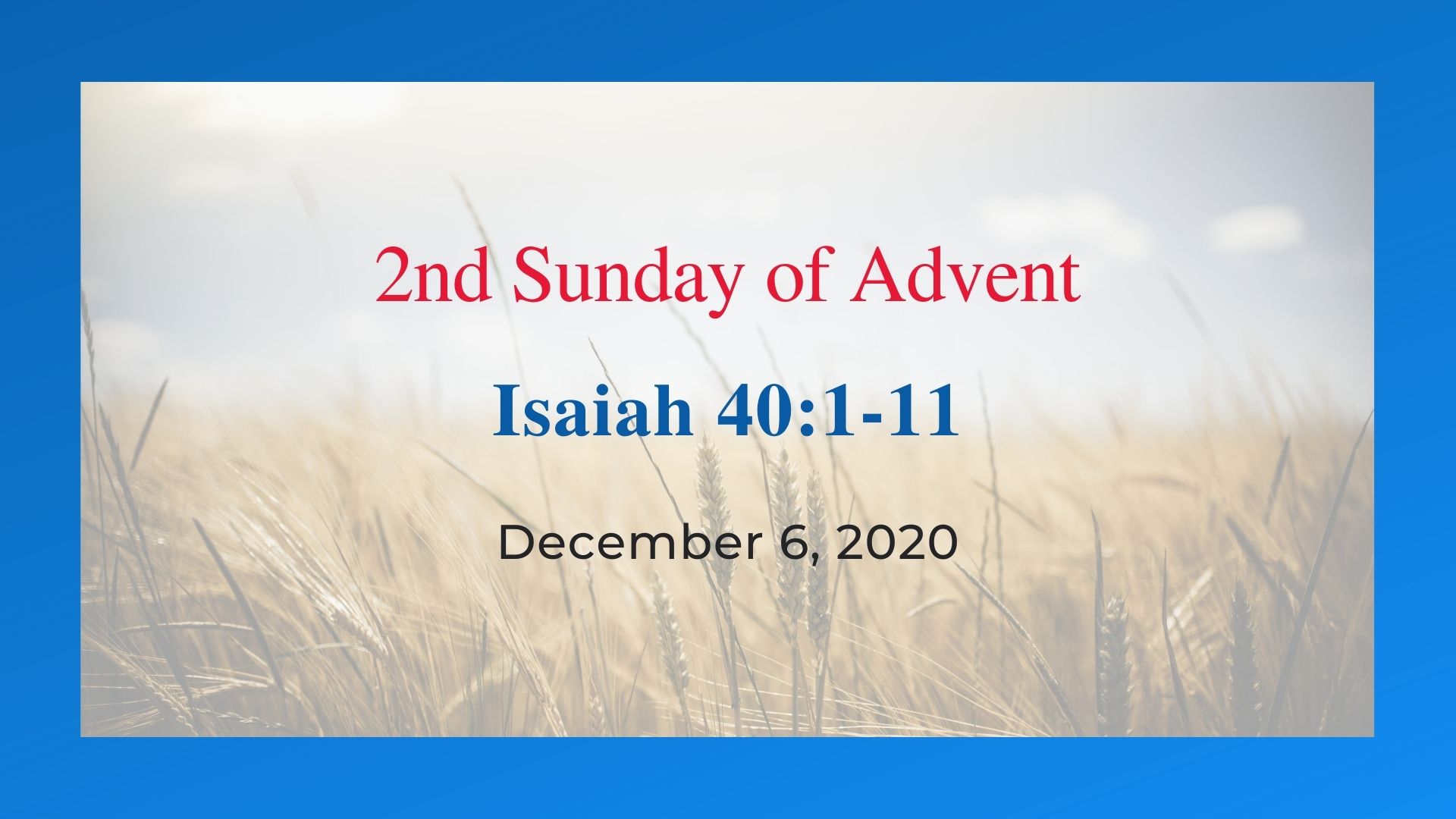 There has never been an Advent series of texts that does not include Is.40. The plangent opening lines, “Comfort, comfort, my people,” shape the very essence of the coming birth of Jesus and its attendant beauty and wonder. For those of us who adore the Hebrew Bible, and find glorious riches in its complex pages, this introduction to the document we call II-Isaiah, bears special meaning and power. After we have read the often dark oracles of the first part of Isaiah, 1-39, the very last thing we might expect as we enter chapter 40 are these particular words. 8th century Isaiah, that prophet who lashes his people quite unmercifully with the reality and the wages of their sin, especially their denial of the cause of justice for the widow, the immigrant, the stranger, and the orphan, and their unwillingness to listen to the voice of YHWH, leads us to imagine that YHWH is hardly to be expected to be any sort of comfort for such recalcitrant people.

But between chapters 39 and 40 of the collection of Isaianic prophecies, some 200 years have passed, and in the most tragic and terrible event of Israel’s long history, its exile into Babylon and the destruction of the holy city of Jerusalem, the rump nation of Judah has in effect disappeared, swallowed into the maw of the empire of Babylon. The presumption is that the people of Judah will never be heard from again, that only in the deep mists of history will such a people be remembered, if remembered at all. But after living nearly two generations in the giant metropolis of the vast empire of the Babylonians, this unnamed prophet begins to speak, and what he says is far different than the Isaiah of the previous era. His opening words provide the key to all he wishes to say.

“Have compassion, compassion on my people, Says your God” (Is.40:1)

Like a burst of a glorious sunrise the word of Israel’s God is changed from fury to comfort, from anger to pity. The disaster of exile is met not with recrimination and a haughty reprisal against the defeated and uprooted Judah. II-Isaiah instead announces in glowing terms that God is still with them in their exile, and has now determined that the word they need is comfort, comfort for their pain, comfort for their hopelessness, comfort for their enormous losses of land, king, priests, and history.

“Speak to the heart of Jerusalem,

and tell it, its slavery is over,

its penalty is paid;

These lines are filled with wonder and joy and hope in multiple ways. An unnamed speaker is called to speak to “the heart of Jerusalem,” that is to its will and intelligence. There is nothing sentimental about this call to speak, because the speech is directed to the “heart,” the center of thought and action for the Hebrew speaker. The implication of this heart speaking is to announce that the time of mourning and self-flagellation in exile now needs to end, because YHWH has chosen mercy and comfort that should lead to new thinking, new possibilities. The days of “slavery” are officially over. Older translations read this word “warfare,” because it is from a root that often signifies armies. The famous “YHWH of hosts” is in more literal terms, “YHWH of the armies.” Hence, the KJV read “warfare” here, made justly famous by Handel’s magnificent tenor aria that begins his much-performed and beloved “Messiah.” Still, the word should be understood metaphorically as a “time of service,” or a “term of service” as NRSV reads it. However it is translated, the phrase announces that whatever slavery, service time, or term Israel has been forced to serve, that time is now ended.

The poet reemphasizes that fact in the line “its penalty is paid,” that is the steep cost of that now-concluded service has been paid in full. In fact, the poet suggests that YHWH has demanded a double payment for the errors of YHWH’s people. The history of Israel is a dark history indeed, filled with death and destruction, warfare and defeat, famine and perils of all sorts, but that history is now passed. A new day of YHWH’s comfort and mercy is dawning.

And then out of the promise of comfort sounds a mysterious voice.

“In the wilderness, prepare the way of YHWH!

Make a straight way in the desert, a highway for our God!

Every valley will be lifted,

every mountain and hill brought low.

The uneven ground shall be level,

and the rough places a plain.

The glory of YHWH shall be revealed,

and all people shall see it together,

The poet now expands imagination and proclaims that exilic Judah is not alone to witness the comfort and mercy of YHWH. When the merciful God begins to act, it will include a cataclysm of nature where God’s highway will be laid straight through a desert, a highway that will be facilitated by valleys lifted and mountains lowered to make the road flat for YHWH’s passage, leading the people back to the land of promise. And in the process God’s own glory will be revealed, and everyone will see that glory at the same time. This, you may remember, is that same glory that the great Moses asked to see on the sacred mountain, but was denied sight of it; he only was allowed by YHWH to see God’s “after” (Ex.33:18-23). When God comes in comfort, all will behold God’s glory, precisely because God’s own mouth has spoken; there can be no confusion about what God has just said!

There is little wonder that this fabulous passage appears every Advent. How better to anticipate the birth of Jesus, who for Christians fulfills the appearance of the glory of God, who brings with him comfort and joy, who bears in his tiny body the hope of the nations? The poet of II-Isaiah clearly did not have Jesus of Nazareth in mind when he wrote to those exiles so long before. But what he did have in mind was a new way of perceiving life, a life lived by the magnificent, consoling comfort of God, a comfort that has the power to lead people out of their despair into the marvelous life of a promised home. Surely, many of you can hear as you read this the lovely tones of the tenor, announcing the comforts of our God to us once again this Advent. How welcome that sound is and how glorious for us who long for that comfort in times that seem so desperately uncomfortable, so hopeless, so despairing. Listen again to Isaiah’s word of comfort, and allow it to transform your spirit and to prepare you again to witness the glorious birth of our Messiah.