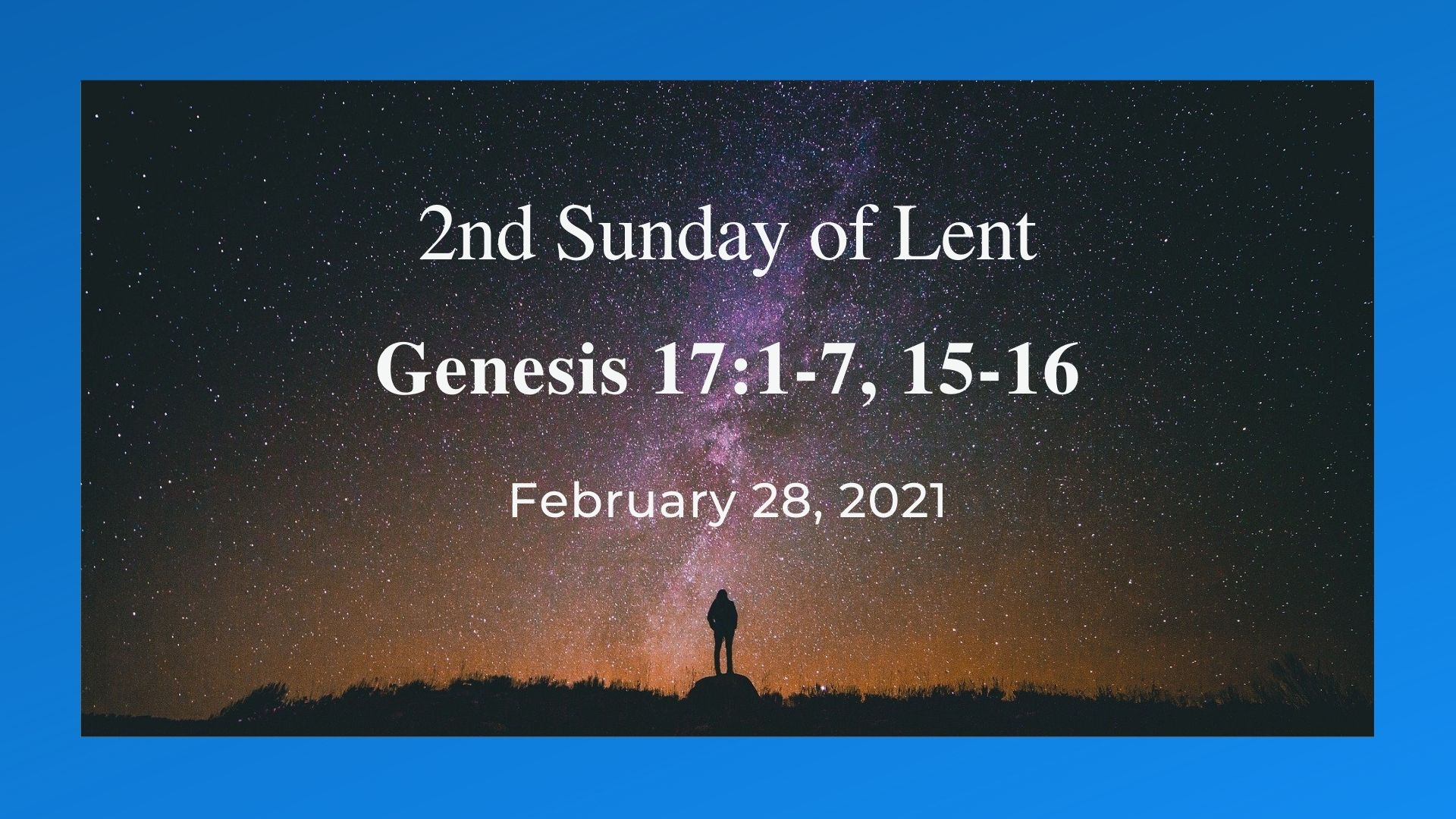 What Sort of God?

If one is reading straight through the book of Genesis, arriving at chapter 17 could easily be seen as a serious letdown. After the delightful and painful narratives of Abram’s boldfaced lies about his wife (Gen.12), after the reiteration of the promise of YHWH in that mysterious scene of smoky fire pot and flaming torch (Gen.15), and after the mess that Sarai makes of the promise of a child to an aging couple that nearly leads to one child’s death and the possible death of his mother (Gen.16), chapter 17 appears on the surface to be merely a priestly concern with the need for circumcision, a much later interest in Israel, necessitated by the loss of king, temple, and land in the Babylonian exile. Circumcision became the sign of the covenant with YHWH, a symbol that separated Israel from the Babylonians who were apparently not practitioners of this act. However, a closer look at the context of the chapter suggests that its placement here has importance to the ongoing tale of the patriarchs and matriarchs of Israel.

The human attempt to solve the problem of childlessness has been nothing less than a complete fiasco. The experience brought out the worst in every character: Sarai became vindictive and oppressive in her fury at the child of her handmaid; Abram was weak and indecisive when his wife demanded the expulsion of Hagar and Ishmael from their camp; Hagar was haughty at the birth of Ishmael, but was finally oppressed and subservient both to Abram and Sarai. It seems obvious that a purely human resolution to the lack of a child will not be possible; that is the context for chapter 17. We desperately need a reiteration of the divine promise for YHWH’s representatives; the mess that Sarai’s and Abram’s plans will not be allowed to impede the plan of YHWH.

We are told that Abram is now 99 years old, and that Sarai is 90, which should make it abundantly clear to any sensible reader that any possibility that Abram could become the father of a child with Sarai as mother is effectively ruled out. Nevertheless, God appears to Abram again, this time in the person of El Shaddai, who commands the aged man, “Walk before me and be perfect” (Gen.17:1). The actual meaning of this particular divine name has been the object of diverse scholarly attention. It could mean “field,” “mountain” “breast,” or “protective spirit,” depending on which antecedents in the ancient near eastern linguistic contexts are argued to be the true origins of the name. (I admit, as a feminist, that I would love for the word to connote “a God with breasts,” thus offering a possible antidote to the constant references to God as male, but I fear the evidence for such a reading is slight.) Perhaps the most important idea to note concerning this particular divine name is that it usually implies a very ancient reality; this one who is appearing to Abram has been God from of old, the one who is behind the promise for all these years. This ancient God demands that Abram “be perfect” (see Job1:1), and as a result of that perfection God promises to make a covenant with Abram.

“I will multiply you tremendously,” says God; “You will become the father of a company of nations.” Thus, the old promise of Gen.12 and 15 rings in Abram’s ears once again, but the question remains: can a 99-year-old be the father of anything at all? But at this point in the drama, Abram’s response to the reiterated, and increasingly ridiculous, promise of a child is to “fall on his face” (Gen.17:3), an ancient way of expressing complete obedience to and trust in a superior being. This is the sort of trust Abram showed at Gen.12 :1-3 and at Gen.15:6, when we are told that he believed in God despite the lack of an heir. The covenant with God here is symbolized by the change of his name from Abram (“mighty father”) to Abraham, which is said to refer to the fact that he is to become “father of a company of nations” (Gen.17:5). Thus, Abraham is taken to mean something like “father of a multitude” in this context. Etymologically, the two names may in fact mean very much the same thing, but that is hardly the point here. Abraham’s new name means nothing less than he actually will be the father of many; the 99-year-old will be what God wants him to be, and his extreme old age will have nothing to do with it.

In the succeeding three verses, God spells out in further detail just what this covenant implies. Abraham will be “fruitful” (the old word of the promise in Gen.1:28), and “nations” and “kings” will come from him. The covenant will be both for Abraham and for his descendants after him, and it will be an “everlasting covenant.” Not only that, the covenant implies the gift of the land of Canaan as an “everlasting possession.” And in summary, God announces, “I will be their God” (Gen.17:8). Then follows the requirement of circumcision as a seal of the covenant, a sign that all males must undergo, from child to old man.

But now comes something quite surprising. After the change of Abram’s name and after the promise of the covenant of progeny and land, it is now Sarai’s turn to receive a new name, Sarah. Again etymologically, there is no difference between the two names, both mean “princess.” Yet, as before the name change is a symbolic one: it is still another sign of the covenant. “I will bless her, and I will also give you a son through her. I will bless her; she shall become nations; kings of nations will issue from her.” The repetitious quality of this speech of God has the tone of urgent evangelization to it; God is obviously trying to convince the chosen ones that God means business and intends to fulfill these absurd promises of a child in God’s own time and in God’s own way.

In response, Abraham again “falls on his face,” but this time his flop onto the ground is not done in obedience but is made in incredulity. This time, the patriarch is at last overcome by the absolute absurdity of this promise of a child and collapses in helpless laughter. He thinks to himself, “Shall a child be born to a man who is 100 years old? Shall Sarah, who is 90, give birth” (Gen.17:17)? Controlling himself at last, he turns to God and says, “Let Ishmael be in your presence!” Nice joke, God, but it is time to return to reality. Ishmael will just have to do.

But the joke is apparently not a joke at all! God’s reply to his guffawing so-called servant is unequivocal. “No! Sarah your wife will bear a son for you, and you will name him Isaac.” Isaac in Hebrew means “laughter,” and there is the joke. You laugh, Abraham? As a result, you will have a child named laughter. (Sarah will have her own private chortle over this foolishness in the next chapter.) So again, as Abram/Abraham has demonstrated in earlier stories, he is not fully convinced that this promise of God will be fulfilled, or is even fulfillable, through his and his wife’s aging bodies. He accepts the changes of their names as the sign of the covenant, and he performs the rite of circumcision as a further sign, but about the actual birth of the actual child, who is to be called “laughter,” his response, rather than obedience and acceptance, is uncontrolled laughter. Well, who wouldn’t respond to such a promise with a mocking guffaw? I mean, who can believe such things? But a denial of the presence and hope of God is a denial that anything really new might occur, and an acceptance that all we have is our own piddling efforts to muddle through somehow on our own. It just might be that we expect nothing from God, because we imagine that God is incapable of helping us or luring us or urging us in any meaningful way. Could it just be that God is, however mysteriously, however wonderfully, acting with us by offering us the absurdity of a fresh possibility for justice and righteousness in our fractured and broken world? Perhaps the grand joke of God is finally on us!